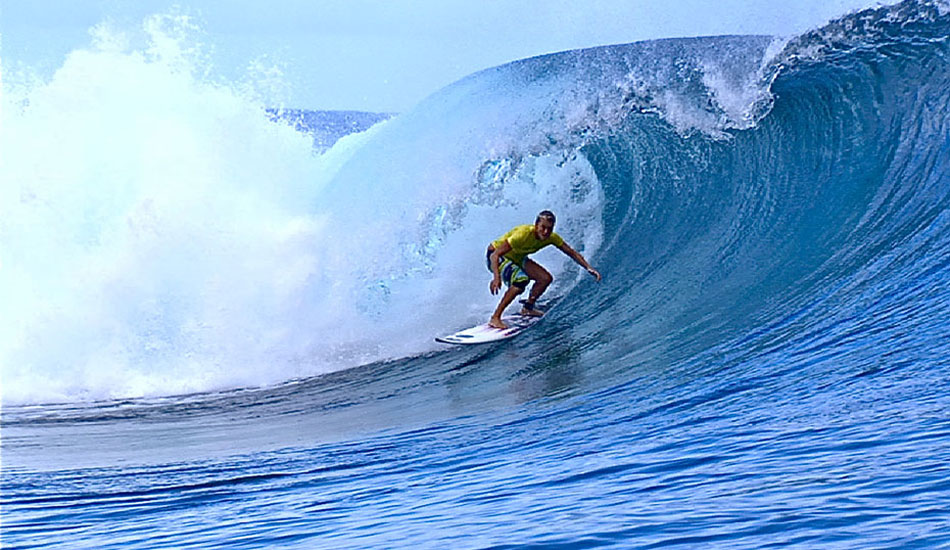 If women’s shortboarding were a song, Keala Kennelly would be the baseline. The deep, pulsating beat beneath the melody that keeps the tempo; the feeling of a heart beat pushing through a cacophony of noise. It’s no surprise that Keala is also a DJ, a mixologist of sound, finding the right beats to marry for dancing crowds.

Everything Keala does is personal. Not in the sense that she avoids the spotlight or refuses to lay bare her innermost hues and shades, but rather, everything she does comes from a deep sense of self-creation. In an industry where a strong sense of self and a unique self-expression can be a detriment, she is proving that the opposite can also be true.

I’m an admirer and so it was that I watched as Keala left the safety of her home and her life-love, Jane (who is pregnant with the pair’s first child), in Hawaii to meet a massive swell in Tahiti. Keala skated over death on the largest day, but Teahupo’o exacted its payment nevertheless, branding the right side of her face with its teeth during the tribute heat for Andy Irons, before the Teahupo’o Pro 2011 final.

The following is an interview with Keala along with the sequence of the wave that dry-docked her on Teahupo’o’s reef:

CS: In many people’s opinion, including my own, you are the hardest charging female surfer ever. Period. Your incredible ambition and courage in the face of the largest mountains on offer from the ocean begs the question: What (and when) was your earliest memory of pushing yourself past that fear-limit that would have prevented you from dropping in on the first wave-of-consequence you encountered as a young surfer?

KK: I remember a time when I must have been about seven or eight years old. My dad was going surfing on an outer reef in Kauai and I wanted to go with him really bad. Over and over he told me I couldn’t go that day because it was too big for me. I was to stay home with my mom. Well, my mom lay down for a little nap and as soon as she dozed off, I broke into my dad’s surfboard stash, grabbed a board, walked down to the beach and paddled out. When my dad looked up and saw me coming around the corner smiling his eyes got big like saucers. I think he wanted to send me straight in but after that long paddle I wasn’t going to be happy unless I caught some waves. It was about 6-8ft Hawaiian (12-16ft faces) and I was definitely intimidated, but I was also stoked to be out there. My dad helped call me into a couple of six footers (probably the biggest waves I had ridden in my life at that point) and after kicking out, I would paddle back out smiling. Eventually I got caught inside and pummeled by a set which shook me up and probably scared the crap out of my dad. When it was over though, I felt good and triumphant and my dad and I paddled back to the beach high-fiving and laughing.

CS: Where does your fire and determination come from? Family, friends, being a haole-girl in Kauai, personality, surfing itself… ? How do you stoke this feeling if/when it subsides?

KK: I think it came from growing up in Kauai as a girl surrounded by nothing but strong male influences. I am an only girl with two brothers, a total daddy’s girl. My god father is Laird Hamilton, and Kala Alexander is like an uncle to me. Andy and Bruce Irons were like my brothers growing up, so I had a lot to prove in order to impress those guys. They set the standard and I was just trying to keep up. The confidence I have in myself does subside sometimes and I doubt myself. I doubt that I am any good at surfing, I doubt that people respect me or my surfing and I doubt that I will ever do anything amazing in surfing again (Andy and I were very alike in this way). The way I get my confidence back when I feel like that is by doing something amazing again. Chasing a big swell, getting a big barrel, out-doing my personal best, then I am good… for a little while.

CS: The Hawai’ian meaning of your name is the path or the road. In a very real sense, this could have been, quite literally, The End of the Road, had the incident at Teahupo’o played out differently. Do you feel as though you were being watched out for during the tribute heat for Andy that day? Did you feel that Andy was present with you that trip? It seems to me that this was Andy’s swell… a gift from him for you all during the contest.

KK: Glad it didn’t play out like that. As unlucky as I was to collide with the reef face first, all things considered I am pretty lucky. As for Andy… he is always with me. Andy helped shape who I am as a person and as a surfer. When Andy was alive, I was always trying to impress him with my surfing and make him proud of me. Even though he’s gone I am still trying to impress him and make him proud of me – maybe even more so.

CS: The wave that took you out seemed relatively “normal” by Teahupo’o standards, but everyone knows that there is nothing normal about any wave at Teahupo’o. You said, “One minute I was getting barreled and the next minute I was getting pile-driven face first into the reef.” After having some time to think about the incident, do you have a better understanding or guess as to what went wrong?

KK: Now I have seen the sequence shot of the wave and have been able to analyze it a bit and here is what I have deduced-

It was a pretty regular looking wave. I took off and it had a bit of bump that kept me from pulling into the barrel straight away. I had to make some adjustments and then saw that the next section was going to throw, so I bottom-turned and parked it in the barrel. I traveled for a bit, had to negotiate the foam-ball. That may have thrown me off and made me have to draw a higher line than I would have liked. I thought I was coming out, but the lip just clipped me in the head and threw me straight into the reef before I even realized what happened. I think I was bleeding before my brain even processed I wasn’t coming out of the barrel.

CS: I think this scar may officially be your greatest Badge of Courage. You have blown the glass ceiling to bits. Do you keep this in mind when taking on such challenges? Or is this something very personal for you that also happens to impact women’s surfing?

KK: It’s personal. Doing these things is what makes me feel truly alive. The fact that women’s surfing gets to benefit from me trying to feed my passion is a really nice bonus and I am more than happy to help.

CS: Is this your worst surf-related injury? Has it crossed your mind, at any time during this experience, that taking these risks is not worth it? Or does this just make you want to charge harder after surviving it? Why is it important to get back up and keep charging?

KK: This could be the worst wipeout of my life but it didn’t feel that way when it was happening. I have taken much heavier wipeouts that have torn ligaments and kept me out of the water for months. I’ve had scary two wave hold-downs that make you think it’s all over. This one seemed like a very typical wipeout, and I was completely shocked when I saw the amount of damage that was done. It was a scary one because it was a head injury, so close to my eye and so deep (to the bone). The doctors were very concerned that I had cracked my skull, cheekbone or that I had injured my neck, so I was pretty stressed until the CT Scan results came back all good. It does cross my mind that the risks I take in big waves are not worth it. I don’t want to sacrifice my life for this. I try to be very calculated about the risks I take and try to be very realistic with myself about where my limits are. I don’t ever want to be in over my head. I really think what happened at Teahupoo was more of a freak accident. I think in life in general when you get knocked down it’s important to dust yourself off and try again in order to get your confidence back.

CS: I recently met a gentleman who had a daughter that he named after you because of your courage and strength. It made me wonder about your close connection to Andy and I wondered if you had any thoughts of including his name (or middle name, if he has one) in the name you choose for your son?

CS: Do you think that you will alter your approach to surfing consequential waves because you’re now a parent?

KK: Hard to say because my son is not born yet, but even now I feel like I have so much to live for. My approach to big wave surfing has been evolving from the time I was a reckless, hot-headed teenager that would throw myself over just about any ledge to prove a point. I weigh the risk and reward now. I don’t care if I am the woman that rides the biggest wave of the year, I don’t allow myself to feel pressured to go out on a big day just because another woman paddled out. If it looks dangerous to me and I am not feeling it I don’t go. Period.

CS: What are the most important values you want to teach your son?

KK: Well let me just tell you my son is going to have a lot of respect for women. Honesty, integrity, bravery, kindness, compassion for others, pride in who he is, and above all to treat others the way he wants to be treated.

1 thought on “Keala Kennelly: Beat on the Road”