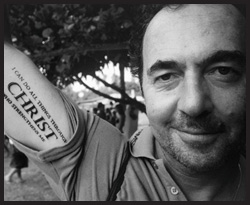 “On chemicals, especially those ecstasy things, it’s not just possible but highly probable that you’ll do something you otherwise wouldn’t do. On chemicals literally anything is likely and even acceptable – until ground zero the following morning when you find yourself headbutting a brick wall searching for an answer to the perennial question: Why? How could you have been so promiscuous, so presumptuous, so outrageous… so stupid?”

“I’ve got nothing to say,” says Paul Sargeant, 52, the most prolific and influential photojournalist in surfing history, during the third and final abrupt phone conversation I have with him. His voice is shaky and higher than it was when he appeared, in happier times, as the court jester in his own Sarge’s Scrapbook videos, before he was banished from the sport. His sentences – the few he utters to me – are short and stern, a far cry from the casually articulate way he chronicled the crazy side of pro surfing in Tracks and other mags for more than 20 years. In the background I can hear a woman talking loudly, which sounds like daytime TV but could be his mum, with whom he moved in early last year.

The conversation is overshadowed, as usual, by my desperation to keep him on the line, earn his trust, and convince him to agree to a face-to-face meeting. I tell him that his involvement in this profile, which I’ve spent eight months researching, would be a good chance for him to re-emphasise the positive contribution he’d made to surfing, but he knows that that is not all we’d be discussing, and wants no part of it.. Sarge

“I’ve got nothing to re-emphasise.”

Does he ever want to return to surfing?

But what about your will?

“My will doesn’t matter. It’s all about God.”

How’s God helping you these days?

How’s your state of mind?

That’s relatively speaking, of course. What I didn’t get a chance to bring up with him was the reason he was banned from all future ASP-sanctioned events in October 2005, which sent him into, according to his friends, a potentially suicidal depression. It was a sudden departure. You didn’t need to be a keen follower of the tour to notice his absence. After more than two decades of ubiquity – reporting pro surfing through magazines, videos, websites, a 0055 phone service and even, towards the end, as an official media liaison officer for the ASP – he was gone. That the surf media has never mentioned it is in itself scandalous.

I began calling Sarge in November 2006, leaving messages asking to meet. I started making other inquiries, and was asked, through Gary Dunne, a friend of Sarge’s, in May 2007 to back off while Sarge recovered from a bout of depression. I renewed it with more conviction three months later, and the immediate response from almost everyone was extreme wariness, if not resistance. “You’ve got to give people time to heal,” former Tracks and Australia’s Surfing Life editor Tim Baker said, summing up the attitude of many. I disagree.

The incident that led to Sarge’s banishment from the sport involved him performing an unsolicited sexual act on another male journalist in his sleep, who suffered from violent nightmares for two years afterwards. Despite the ban, Sarge retains a toehold in the sport through his presence on worldprosurfers.com, the surfers’ union website, and, as he says, he is not ruling out somehow returning to the sport (the ASP offered him the option to discuss a review of the ban from January 1, 2007, which he has so far declined). It is in the sport’s interests that the surfing public knows what happened, how the ASP responded, and whether Sarge is remorseful for what he did.

One point needs to be made clear up front: Sarge was born with enormous psychological burdens. He is bipolar, alcoholic and at various times has been openly bisexual or gay, which, in some sections of the pro tour, especially in the 1980s, was akin to leprosy in the 19th century. Not only that, he lost his dad when he was only 24. Most of his close friends have, at one time or another, talked him out of committing suicide, usually in phone conversations that go on for hours. Only a handful of people I spoke to didn’t in some way empathise with the tortured ways his mind works, and how the circumstances he was in exacerbated them. Dean Whiteman, a former Cronulla boy who has known him for 20 years, says, “He’s a complex, intelligent guy, as much as a fuck-up, but he’s always had good intentions. And he’ll never know what he really stands for until he’s able to come out and recognise what he is as an individual.”

Sarge’s younger brother Steve, with whom I have a long conversation about the many unacknowledged good things Sarge did for various surfers over the years, is taken aback when I ask him how long ago it was that he learned Sarge was gay. After a pause, he says:

The incident that ended Sarge’s association with the ASP happened at Jeffreys Bay, South Africa, in July 2005, a few days after the Billabong Pro had finished. Sarge had been sent there by Rip Curl to shoot Tom Curren. The only remnant of the pro circus was the 14-man Drive-Thru crew, which included Pat O’Connell, Nathan “Nudes” Webster, Benji Weatherley, Pottz and Donavon. Accompanying them was journalist Adam Blakey, who was writing a feature for Transworld magazine. It was the last day of the Drive-Thru trip, and that afternoon they had surfed eight-foot J-Bay for six hours.

Read the rest of the article on STAB