Published by TRACKS magazine, Australia. May 2011. (Read the Full version here)
 It’s a secret. It’s surfIng. and It’s sexual. fark, It’s a headlIner rod cunthorpe would gIve hIs crusty rIght gonad for.
Words By the fly.

Surfing’s latest so-called dark secret was going down quietly long before surf legend cum gender bender peter drouyn swapped his boardies for a bikini in a sex change and said, “I want to inspire male and females of all ages to seek truth.”
Now tom carroll wasn’t surprised at peter’s ‘reassignment’ and terry fitz just put it down to pd being a ‘drama queen’. ‘westerly’ as pd is now known, was always the goldie’s wild child. westerley is not so much gay or even same sex attracted however, but a transgender – one of the many colours of life’s alternative sexuality rainbow.

This surfing ‘secret’ has been hovering somewhere on the outspoken peripheries for some time. We know it was around when the first issue of Tracks hit the pink stands on Oxford Street in Sydney in the happening ‘70s. It was also writ large in Goodvibes ink when the Captain famously sketched in these pages that clubbies were all ‘poofters’ in their nylon sluggos and pink zinc lipstick. And it was thrown out more blatantly when Macho Matt Branson ‘came out’ in a Priscilla moment of tattooed rock and roll bravado.
Yes… big drum roll folks – taddahh, it’s the secret sexuality of surfing. Is this the end of surfing as we know it… or is it just human beings, well… being human?
Now the surfing culture has long promoted the ‘don’t ask, don’t tell’ line for decades, much like the (recently reversed) policies of the US military. This of course has led to many would-be surfers choosing other paths and some surfers to lead very double lives.
Earlier this year however, one gay surfer (a French born Australian, in case it matters) built a website for gay and bisexual surfers and quicker than you can say bite the pillow, gaysurfers.net was swamped with thousands of members from 76 countries. Now, gay surfing social days, the first ever gay surfers float at this year’s Sydney Mardi Gras and the website gaysurfers.net, heralds a new social paradigm. Curiously, Aus- tralia is leading the world in this social phenomena.
But let’s be clear, despite the websites and events like this, surfing is still pretty homophobic. In fact to demonstrate homophobia is almost necessary if you want to fit in within our surfing culture. Historically, gay surfers have been relegated to the kookocrasy class. Things are changing. How’s the saying go? ‘20% of us are them’? Or is it, ‘20% of them are us’?
“Gay blokes continue to surf even though they experience bullying,” say Gold Coast born surfer Dr Clifton Evers in his new book, Notes for a Young Surfer. “They’re gutsy,” writes the surf culture commentator, who scribes about surfing mateship and brotherly style romances which he coins ‘Bromances’, es- pecially for guys who prefer the company of mates to their girlfriend. 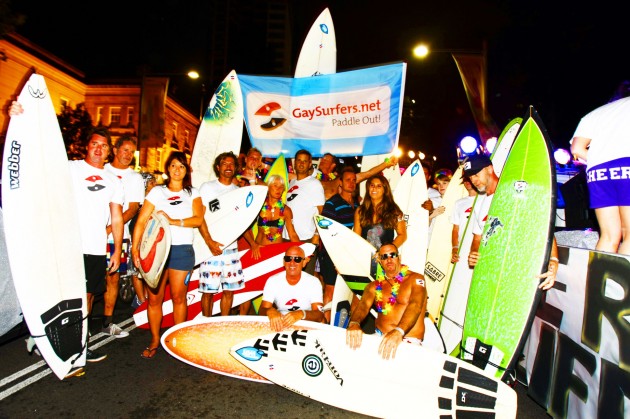 Evers goes on, “bullying someone because they like to have sex with people you don’t want to have sex with is stupid.”
A number of surfers, young and old, have suffered severe depression – and worse, as a result of the surfing world’s demonisation of gays and the sports’ expectation for sexual nondisclosure. It’s career suicide, for a guy at least, to admit he’s gay, same sex attracted or bisexual.
And yet as many of the lesbians reckon, it’s not a choice to be gay but comes with genes at birth. As for male surfers who’ve ‘come out’, Matt Branson and ex pro Robbins ‘Beached by Homophobia’ Thompson (San Diego) remain among only the few publicly, across thousands over the past five decades. And outing surfers is not what this is about, say the thinking crew, it’s about celebrating the diversity of the culture. So long as surfing closets some of its secrets darker than some brands of the Church, it will attract critics and cyn- ics, rather than fostering itself as a healthy and inclusive cul- ture, open to opportunities; so say the advocates for change. Surf snapper Scott Needham reckons, “without gay friends life would taste like dirt. My mates are my mates: straight, gay, paraplegic… whatever. They’re often the easiest to talk to and usually the funniest. Some play footy, some play music, some surf, some don’t do anything but shop… sometimes I wish I had more mates like them… I love ‘em!”
Leading the charge for gay surfers globally, from Australia, is 33-year-old Thomas, founder of gaysurfers.net [GS]. We had a chance to sit down and flesh out what he and his surfing following are all about.
“Surfers like to travel, and luckily, our nomadic tendencies give us the opportunity to learn about the world’s races, re- ligions, and sexual orientations. However, for all of the eye- opening experiences associated with the sport of surfing, there still seems to be very little mention or acknowledgment of surfing’s gay community. There are homosexuals all around the world, in every family, profession, sport and community… and, yes, even in surfing. Although it may challenge the ‘tough surfer bloke’ stereotype, there’s not much we can (nor should) do about it. It’s what we call diversity. It’s a good thing. Sadly, as a long-time surfer, I’ve found that a tragic number of gay surfers are closeted, largely as a result of the sport’s tilt to- wards homophobia,” Thomas tells me in a conversation joined by David, a Byron Bay surfer. David reckons marching in the Gay Mardi Gras as a surfer who happens to be gay was “the most massive thing I’ve ever done.”
Clearly the internet provides a powerful tool for diversity through community building. Like surfing, the internet has the power to connect people in an instant, and since there’s actually a sizeable homosexual population within the surf community (according to Thomas) he was hoping to find a website where gay surfers could meet, speak, and exchange ideas. The internet age has allowed a space for people to explore their sexuality with an increasing number of people now ‘swinging’ across the relationships pendulum. Thomas searched online for years, but never found a site just for surf- ers. For him, it begged the questions: Where are all the gay surfers hiding? And why are they hiding?

“If It’s against the rules to hassle Jews, aborIgInals or Muslims, then gay surfers expect the same deal.”

So one day last year, while riding a wave of optimism and outrage, he decided to build it himself. Even his ex girlfriend helped him out.
The GS mission is simple Thomas reckons: to create an interesting and fun site where gay men and women can gather, connect, and share their passion for surfing and other related issues. It’s kept clean, interactive, and easy to navigate, and he’s been amazed at how quickly it has grown. In the first six months, 2,300 gay surfers registered from 76 countries worldwide.
“I get a lot of feedback from members who say that the site has allowed them to realise that they are not alone. It’s an important realisation, because mainstream surf media has made few at- tempts to extend a hand to our community. Our site breaks down prejudice and builds up self-esteem by creating a network of openly gay surfers who understand the trials of being homosexual within surf culture; essentially, we’re making it easier for them to accept themselves. That’s a big part of our mission: to remove shame from the equation and help gay surfers be the best they can be.”
Thomas says he’s happy to see so many young surfers joining the community, because he finds that the younger guys who are just discovering their homosexuality need the most support and encouragement – especially in light of recent,
tragic news of homophobic bullying and suicides among gay teenagers.
“It’s not easy to come out to all your mates, but if you want to be happy, I believe it’s necessary. For many years, I hid my own identity as a gay surfer. I thought I’d be excluded if my surf mates knew the truth… until I actually told them and realised they didn’t give a damn. Yep, by the time I divulged my big secret, my mates had travelled the world and been exposed to a lot of different ways of life, so my homosexuality didn’t strike them as a very big deal.”
“By participating in Mardi Gras, we are showing the public that a healthy diversity exists in both the gay community and the surfing community.”
Gay surf contest ‘CoastOut 2010’ director Nat Jandl from girls-only Diva Surf School joined former WQS competitor and out and proud lesbian, Lisa Black in what was the resounding chorus of their Big Gay Out: a fair go for same sex attracted surf- ers. They and others are calling on the ASP to in- troduce stricter guidelines to ensure gay surfers are not vilified, harassed or discriminated against because of their sexual orientation. If it’s against the rules to hassle Jews, Aboriginals or Muslims, then gay surfers expect the same deal. Given that evidence-based research on the homoeroticism and homosocial masculine bonding of surfing and no shortage of anecdotes, it’s fair to expect that the question of equality needs to be addressed by surfing peers.
At the Quiksilver Pro on the Goldie, I had the chance to, somewhat cautiously, canvas the sexu- ality subject with a cross section of the tribe and get a thumbs up from the majority that the days of ‘poofter bashing’ – physically or verbally – belongs in the last millennium.
Surfing Australia itself says it will not tolerate any acts of aggression and its policy says it will treat all players fairly within the context of their sport- ing activities, regardless of gender, race, place of origin, athletic potential, colour, sexual orientation, religion, political beliefs, socio-economic status and other conditions.
For Peter Drouyn his ‘truth’ has set him free. A character like Westerley might be the extreme edge of the wedge but there seems to be many surfers who are now willing to change their views about sexuality.
What do you think: should surfing condone any form of bigotry and harassment of people who are ‘different’ or is it time to accept that what some surfers do in their bedrooms and how they choose to express love is fine and we move on?
Lives and happiness depend on your attitude and your answer. 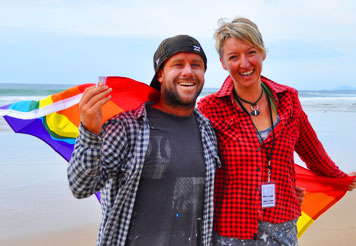 For anyone out there struggling with their identity, sexuality, or iF you just need support, please visit: twenty10.org.au

9 thoughts on “The secret sexuality of surfing”