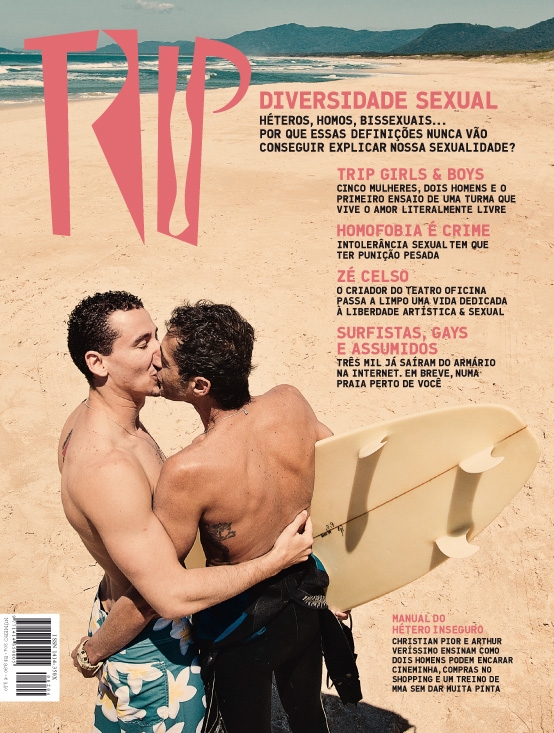 “Originally published by TRIP magazine Brazil – 24.10.2011 | By Sara Stopazzolli” – Thanks to Victor for the translation!
Click here to read the article in Portuguese (original Version) 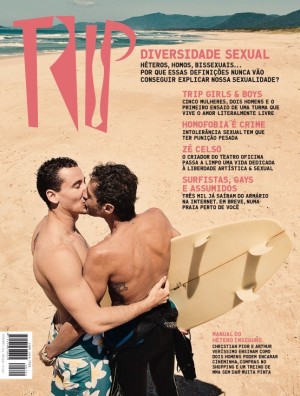 The world of surf is way funnier than the stereotypes that are intended to us to believe – as a social network with more than 3.000 gay surfers spread for all over 81 countries. However, Brazilians who are in this group guarantee that is easier to come out on the internet rather than the beach.

When he left Piraí, a city in the countryside of Rio de Janeiro state, towards the capital Rio de Janeiro city, the first thing that Nêgo (Marcus Vinicius Gouveia on his ID) asked to his father was to sign him in a surf school. He learnt and never stopped since then. Back then, he was 16 years old. One year later he started to grow feelings for his classmates and thought it was something natural, a phase that normally many of the guys go through silently. Until the day that Marcus was on the beach and a surfer guy which was the same age as him stared at him in a different way as he could share with him a common secret. He invited him to come over his place to watch a scary movie. Nêgo gave his first kiss that night. “I was shivering”, he tells. After three months together in the “hided-in-shadows relationship” his boyfriend couldn’t hold it as a secret any longer and suggested him to come clean with their relationship: “You can hook up with everyone you like and me as well”. Despite he was in love with him, in fact this might be the main reason, Nêgo decided to break up with him. He started to get to know other guys and little by little he started to share his sexual orientation with his friends and family. “I’ve got more straight friends than gay friends but they all respect me as I am. In fact they all treat me more carefully. And the surfers are easygoing; they are more concerned about what people are than what they do. They just think awkward that gay people are into the same thing as them”, says Nêgo that now is 24 and studies Biology. When he met his first gay surfer lover, years afterwards, Nêgo insisted on telling about everything about his history trying to encourage him to come out of the closet, but he was unsuccessful.
Stories like Nêgo’s have become usual in the surf crew more often – as the relationship website gaysurfers.net proves. Launched last year by the Australian Thomas C. Green, the social network has now over 3 thousand users from 81 countries; Brazil represents almost 15% of all users or 450 members, according to its creator. Green spent years hiding his sexual identity fearing that he could be rejected. “But after I came out, I found that this wasn’t a big deal. Surfers are used to travel and get to know different cultures” he says:

“In the 60’s, surf was born as an alternative lifestyle that was against the established sense of order. In the 90’s, the sport became an industry and created a stereotype of tanned blonde guys that ride high waves while hot chicks watch them from the shore. I can say that surf culture is way over than just that” 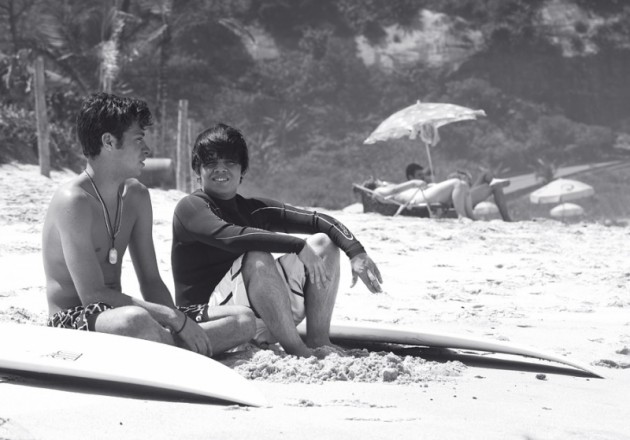 With the gaysurfers.net, Green has confirmed what he’d already suspected: there is a great amount of men that likes men and also surfboard around the world, although plenty of them still prefer to come out just virtually and to their similar. The Trip report group got in touch with almost 50 Brazilian users of Green’s site. Only 3 of them agreed to have an interview and just two agreed taking photos. “If I don’t say something, no one else will”, says Lucas Messeder, 18 years old boy, student of Geology from Rio. He knows some not-open gay surfers and has already had some kind of affair with one of them. “Besides to fear what society might think, there’s also a fear of not getting any sponsorship”, he explains. Lucas confesses that he started to get into surfing with second intentions. He felt attracted by the strong-wet-wearing few clothes guys. When he realized, he had already fallen in love with the sport even more than he had fallen with boys. When he was 16, he took some courage and came out. “In the beginning my friends didn’t believe it and some of them acted weird, which I believe is a natural behaviour. After that, the friendship remained and nowadays they accept me, they know the boys I have relationship with and also stand up for me against mean comments. They are my second family”, he tells.
According to the graphic designer Rodrigo (fake name), 28 years, there’s a fetish among the surf world because this sport is associated to a romantic and wild atmosphere and also to beautiful people. “If there is a fantasy to go to a desert island with someone, it would be a lot better if it was with a surfer” he comments. He’s been surfing since he was 16 years. When he started to date a boy back when he was 20, Rodrigo chose to move away from his surf friends. “I wouldn’t feel comfortable. I started to make a new friend group that had some surfers in it but it wasn’t the same. I still miss them in the water”, he says. Today, Rodrigo believes that surf universe is more open to individuality than the other sports: “The surfers have obtained a very special habit for their lives, which means good health, nature contact and a little bit of happiness. Who is trying out their own happiness doesn’t bother too much to other’s happiness”.
Nevertheless, he prefers to remain anonymous because he doesn’t feel like dealing with public opinion and also with prejudice of people he doesn’t even know. “What is the meaning of being an open homosexual in surf? To have a rainbow surfboard?” he asks.
On the other hand, DJ Sérgio Cardoso, 51, from Rio, is proud to open his sexual orientation in public; still, he doesn’t feel like fitting in any stereotype. Womanizer surfer since he was 14 years old, he spent part of his adolescence hooking up with a surfer pal, who also had his girlfriends. 18 years ago, Sérgio moved to Florianópolis, where sometimes was seen holding hands with boys and other times with girls. “I’m completely aware of how much this can be uncomfortable. ‘This guy likes other guys gay but he’s not gay? Beyond that, is he seeing the girl I’ve always wanted? People are not ready to accept a man who acts like a man, who practices men sport and has a boyfriend”. He is into windsurfing as well and today has a Muay Thai fighter boyfriend, Bruno Araujo, 24 years old.
According to Sergio, the definition of sexuality is associated to the level we allow our environment interfere in our choices. “We could even play as we’re dead and pretend there’s no choice at all. There’s one though. There always will be. The greatness of a full existence is to be able to understand and accept what we’ve chosen and realize that there is not a simple answer. He says and completes: “My identity was given to me by the surf. You have to get to know a lot about your body limits in order to put yourself in a rough situation. I love that. In surf, on a misfortune day which the sea is restless, there isn’t a “God” to help you out. It’s just you, a surfboard, your limits, your passion and your ability to evaluation. It’s the most faithful portrait of “human condition” that I have learnt. If on the beaches the intolerance is starting to fade away, in professional surf, the situation is still unclear. Until today only two famous surfers opened their homosexuality: the tattooed punk Matt Branson and Peter Drouyn. However, they only came out after they have left the competitions. The Australian Drouyn, as a matter of fact, he chocked the surf world when he showed off as this blonde Westerly Windina, three years ago, saying that he was getting ready for his sex change surgery (report theme of 2009 Trip: check it out on http://tinyurl.com/3h7kfsd).
The businessman and surfer Fred d’Orey who followed their careers in the 70’s, says that he will find a lot interesting the day that a gay surfer will win one ASP stage. “What difference does it make?” None. It’s just another test that we, as a tribe, develop to understand the differences. There’s no such thing that annoys me the most as standardization, everybody wearing the same clothes, talking about the same issues, going to the same places like robots. Who searches these things should really leave the surfboard aside and enrol to the army”; he says.
While the mainstream takes long to put gay surfers on the radar, the community gets organized. Last year, gaysurfers.net promoted its first world competition in Australia. The quorum wasn’t the best though, in the second one, scheduled for the end of October this year has everything to kick ass, according to Thomas Green. The competition will take place inside a huge gay beach festival in the Australian city of Coffs Harbour. Green says he would love to see a great brand supporting a gay surfer but his biggest ambition is not in the “market”. The great mission is to help guys that enjoy surfing and men to realize they’re not alone, to make them accept themselves as they are and to help them get their self esteem back. As Green believes, virtual experience has brought a positive surprisingly feedback, but he knows that in real life there’s still a long way to go.

2 thoughts on “Between Tubes and Taboos (english Version)”