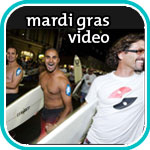 We all had a blast at this year’s Sydney Mardi Gras. GaySurfers.net went off! Our members worked as an organised and creative force to construct a great float, orchestrate our march and make it a fantastic moment in surfing’s history.

The music, the costumes, the anticipation and sense of theatre that each float created sent the 30,000 strong crowd into cheers of mutual support and elation at what they were part of. To watch a person walking through the street dressed in all their pride and uniqueness…it is humbling! To see a massive crowd applaud them has you believing just that little bit more in humanity. For so many people taking part or attending, the atmosphere of the ‘show’ was life altering. And, out of all this came an historic moment for surfing…gay surfers marched up Oxford Street to shouts of support and relief. At last, diversity in both surfing and the gay world was being represented and we had a name, GaySurfers.net.

Led by members holding our GaySurfers.net banner and followed by a 4 wheel drive showcasing the G-board and laden with surfboards, 25 girls and guys walked, danced and grooved along the parade route to a slick mix of iconic surf tunes. When the song ‘Wipeout’ blasted out of the PA, each member’s surfboard was raised into the air in formation to spell out ‘GAYSURFERS.NET. Always at this point the crowd would go wild.

We even got some Pam Anne TV air time to get our message out to home viewers that we, at GaySurfers.net, are a global community of surfers with 3,000 members from 80 countries…we surf together and regardless of what she thought, wax is used for our surfboards.

The members of GaySurfers.net who were involved in the organising and running of the float did a spectacular job. Under Thomas’ leadership, the night was one we’ll never forget. When a whole city comes together as a united collective to support and celebrate diversity it’s a totally unique experience.
Planning for next year has begun…get involved and paddle out!

2 thoughts on “A Huge Wave of Support!”