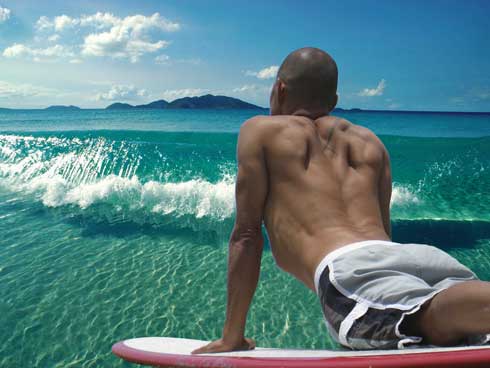 Getting a Push — Into the Whoosh

It has been said, “When you’re a Jet you’re a Jet all the way from your first cigarette to your last dying day.” Such is the nature of being part of a tribe. Sure, there’re the rites of passage, the tribal clothes, the signifiers of rank and dominance, the secret languages, gestures and glances. Those are the outward marks of being a member. It’s the internal knowledge that’s the true membership badge though, and the process of coming to that identity is what makes one a bona fide member. Do you remember your first experience where way deep in that reptilian part of your limbic system you had come to complete knowledge, joy and acceptance of what makes your soul and your nether parts throb? There’s no turning back from that moment. You are what you are and what you do is who you are – devil may care (but I don’t think he really does).

My initiator Mark, pulled me up off my stomach, big hands under my armpits, and set me upright at that oblique angle with a push into the whoosh. “Don’t look at your feet, look at the shore, feel the surge of the wave in your shorts! You got it man, you’re natch’. You’re skimming now like a flyingfish! Yeah! Ride the shoulder ‘til it peters out and there’s a button on your spine, hit REPLAY – do it again, paddle out to the lineup… do it again by yourself now, push it into the surge hard. We got a lifer guys! Next surf student”.

That was it. At that moment, I’m hooked through the gills. If I were never to surf again, I’d still be a surfer. I can say I had the same experience that night up in the hills, my first plaid flannel sleeping bag sex with my buddy. You know it when you feel it that deep, and it’s for life.

That replay button got set a decade ago when I was living in the Bay Area, pioneering the internet with a legion of 20-something geeks from everywhere from Ohio to Mumbai. They moved to California wanting a taste of the Golden State and its icons. Surfing’s as “California” as you get so they arranged a classtrip, and I was invited to take lessons in Santa Cruz with my colleagues. Having grown up on the other coast, I’ve been a proficient bodysurfer since knee-high, and an avid bodyboarder too, but surfing on a board was always just maybe a little too mainstream, maybe even a little intimidatingly-hetero for me. Devil may care if it’s considered a straight sport. But, is it really a straight sport? There are lots of vibes when you’re out in the water. You really can feel more through your boardshorts – that instructor was right. I can feel the presence of a shark sometimes through my shorts, and I can feel someone vibing me from vying for that wave-of-the-day too. Was that vibe homophobic, or was it just boys being boys? That depends on how sensitive you are about who you are, and it depends on who is giving the eyeball too. Google gay+surf and you’ll probably see some keystrokes not actually caressing the intersection of the two, but what the gist of the animosity is, is not the antagonism as much as the mutually encapsulated aspect of surf culture, and that of gay culture too. A tribesman is first and foremost a member of the tribe. Pardon my digression for the moment – I joined an online group recently for those who restore old woodworking tools. The rules of joining specifically state, “No posts touching religion, sex, or politics allowed, PERIOD. This is a haven for those who want to talk pure shop – so go somewhere else to muck up your day and leave us our swept up piles of sawdust.” That’s how surfing is. And for that matter, in that way surfing is like just like sex.

Considering getting wet too?

E S S E N T I A L S:
• Take a lesson. Surfing is one of the hardest sports to get a taste of, especially if you’re not a dolphin. You will not taste even a morsel of the sport without an instructor and the right equipment. It’ll just suck. If you really think you may like surfing, indeed if you want to like surfing your first time, take that lesson in Waikiki. I mean it. You will become a devotee to the sport.

• Take a second lesson. If you enjoy your first taste, there is much more finesse to the sport than flying in front of a wave in survival stance. Finesse, grace, style, etiquette, power, ocean and wave reading, meteorology all contribute to a kick-ass time in the water.

• Find a surf buddy to go out with – it’s more fun, safer, and less lonely being the only gay fish in the water, or so you may think you are. Don’t forget, we’re everywhere. I may be the one right next to you in the lineup. Don’t think my eyeball is anti-gay. I just like the way you fit those boardshorts and I want that wave you’re about to take that’s got my name on it.

• Gay surfing. I still haven’t found a gay surf group. I did attend a gathering once, hosted (or should I say controlled) by a moderator who had us assemble on dry land to listen to him talk about himself and then insist we all talk about ourselves too – while the best waves of the day rolled by. Eventually I bolted and paddled out to join actual surfer boys, paddling out on their boards, their wet asses looking like a stack of mango pancakes piled up into the morning air. Can you blame me? Two sets of waves later, I rode one almost to shore, and my gay brethren were still yakkin’ on the beach. Oh well. On quick vacations to Waikiki, I always seem to miss the group of gay surfers who purportedly welcome visitors of all levels to the sport on Saturdays. Is it me? I’ve heard that at my surf spot in San Diego, there is a posse of lesbians that work it all out. Good for them, with their performance boards, their hoots, hollers, tattoos and high-fives. Hey, maybe you’ll have better luck than me finding that pod of randy gay dolphins to surf with. I hope so. Let me know – and we’ll go out.

Surfing is the royal sport of kings, (and queens too). I write this article in honor of Duke Kahanamoku and Queen Liliuokalani. May they still be surfing in heaven. If you take up surfing, you owe it to them to wear a crown of aloha too, always. 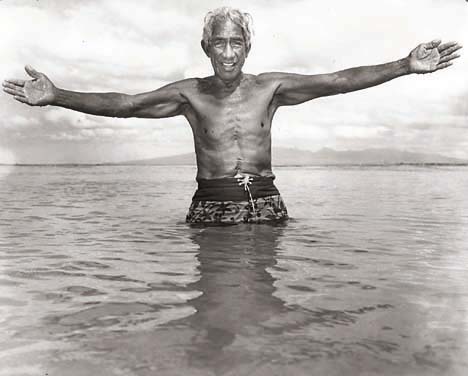 This article, originally published by “GORGEOUS”, a Fag-rag in LA, was a commissioned feature about surfing in Southern California — written for those who’re considering trying the sport, what to expect from the experience (especially from the gay point-of-view), and how to get the best from trying to learn. Jonathan Louie is a graphic designer and freelance writer who lives in a prime surf area of San Diego with his mate, novelist Andy Schell, and their whack-job dog Takeshi. He can be reached on his profile when he and Andy are not surfing.