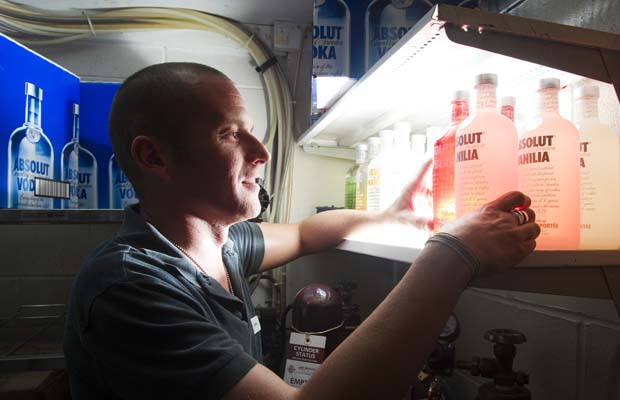 NEW YORK — Russian vodka and the Winter Olympics in Sochi. For now, those are the prime targets as gays in the United States and elsewhere propose boycotts and other tactics to convey their outrage over Russia’s intensifying campaign against gay-rights activism.

At many gay bars across North America, owners have joined a campaign to stop selling Russian vodka — notably the popular brand Stolichnaya. Activists also are pressing the International Olympic Committee and NBC, which holds U.S. broadcasting rights for Sochi, to be more aggressive in criticizing new Russian laws.

So far, there have been only scattered calls for a full-fledged boycott of the Sochi Games, but there is active discussion of how to convey gay-rights messages once the competition begins — including gestures by individual athletes and perhaps a gay-pride parade.

The chief flashpoint is a law signed by President Vladimir Putin last month that bans the “propaganda of nontraditional sexual relations” and imposes hefty fines for providing information about the gay community to minors or holding gay pride rallies. Foreign citizens arrested under the law can be jailed for 15 days and then deported.

There also is concern about a long-running problem of violence against gays in Russia, as well as a new law restricting adoptions of Russian children by people in countries allowing same-sex marriage.

The new laws were approved by parliament with overwhelming support, reflecting animosity toward gay activism that is widely shared across the political spectrum in Russia.

Responding to the furor, the IOC said it has received assurances “from the highest level of government in Russia that the legislation will not affect those attending or taking part in the Games.” It pledged to ensure there would be no discrimination against athletes, officials, spectators and the media in Sochi.

However, the Human Rights Campaign, a leading U.S. gay-rights group, said the IOC should take a stronger stand.

“They should be advocating for the safety of all LGBT (lesbian, gay, bisexual, transgender) people in Russia, not simply those visiting for the Olympics,” said HRC President Chad Griffin. “Rescinding this heinous law must be our collective goal.”

The New York Times, in an editorial Sunday, said the U.S. government “needs to be more forceful” in denouncing the new laws.

“So does the International Olympic Committee, which too often fails to defend the Olympic ideals and should be leading a full-throated international campaign to insist that Russia repeal these laws,” the editorial said.

NBC also is coming under pressure, including an open letter from the Human Rights Campaign saying it would be wrong to televise Sochi’s opening ceremonies without reporting on the anti-gay legislation.

Mark Lazarus, chairman of NBC Sports Group, was asked about the matter during a weekend meeting with television critics.

“We will address it if it becomes an issue,” he said. “If it is still their law and it is impacting any part of the Olympics Games, we will make sure that we acknowledge it and recognize it.”

There seems to be little momentum at this stage for organizing a boycott of the Games.

“History has proven that the only people that are negatively affected by boycotts are the athletes who have trained their whole lives to compete,” said Patrick Sandusky of the U.S. Olympic Committee. “Past boycotts have not worked, and the USOC is not planning on boycotting these Games.”

Patrick Burke of the You Can Play Project, which seeks to combat anti-gay prejudice in major sports, is urging outspoken participation at Sochi by gay athletes as well as straight athletes who support them.

“Maybe some of the individuals who go will feel compelled to take a stand — for themselves, for their family, for their friends, for the Russian people,” Burke wrote in a column. “Maybe they’ll remind us of the power of pure, unadulterated sport to compel change. We’ll know only if we show up.”

Gay U.S. figure skater Johnny Weir, who hasn’t ruled out a comeback attempt for Sochi, has depicted the repression in Russia as “heartbreaking” but says he opposes a boycott.

“There isn’t a police officer or a government that, should I qualify, could keep me from competing,” he wrote in an op-ed last week in the Falls Church (Va.) News-Press.

Another gay athlete, New Zealand speed skater Blake Skjellerup, says he will be wearing a rainbow pin at the Olympics, and “If that gets me in trouble, then so be it.”

“I have no interest in going back into the closet in Sochi,” he told the Daily Xtra, an online news outlet in Canada, where he was training. “This is not about defiance. This is me standing up for what I believe in.”

Charley Sullivan, associate men’s rowing coach at the University of Michigan and one of the first openly gay coaches of a major-college sports team, suggested that other athletes could adopt similar tactics, wearing gay pride pins and carrying rainbow flags to the closing ceremonies.

The athletes, Sullivan said, have “a moral imperative not to let their efforts, their body, the images of what they do, their names, to be hooked to legitimizing of the host country without their consent.”

Nikolai Alexeyev, a prominent Russian gay-rights activist, suggested staging a gay pride parade in Sochi as the Olympics begin “to attract the maximum attention to the rights violations.”

Alexeyev was not among a group of more than 20 other Russian activists who issued an open letter endorsing efforts to boycott Russian goods and companies, as well the Sochi Games.

Russian journalist Masha Gessen, who helped organize the letter, also suggested that activists around the world should confront Russian officials when they travel abroad.

“Our goal is that any foreign trip made by Russian officials or representatives of big Russian companies becomes hell,” she said.

Another signer of the letter, photographer Mitya Aleshkovsky, welcomed the boycott of Stolichnaya.

“If more Russian brands face rebuke and boycott in the West, it would help influence the Russian government,” he said. “Of course, a boycott of Russian oil and gas would be the most efficient step, but, regrettably, none of Western oil and gas importers are willing to do that.”

In New York City, the activist group Queer Nation is planning to organize a “vodka dump” Wednesday at the Russian consulate.

Hoping to defuse the boycott, the CEO of the company that produces Stolichnaya, Val Mendeleev, issued a statement criticizing the Russian anti-gay laws as “dreadful actions.” He depicted his company as a longtime supporter of the global gay community, as evidenced by Stolichnaya’s role as a sponsor of various gay pride events.

“We are upset and angry,” Mendeleev wrote. “We fully support and endorse your objectives to fight against prejudice in Russia.”

Mendeleev said his company, SPI Group, has no ties to the Russian government. The vodka is made from Russian wheat, rye and raw alcohol at a distillery in Latvia.

Some U.S. activists proposed that the boycott be extended to Russian caviar, and also suggested that American companies doing business in Russia be pressured to speak out against the laws.

Two gay-rights groups, All Out and Athlete Ally, on Monday announced the launch of a “speak out, not sit out” campaign that would oppose a boycott of Sochi while encouraging gay-rights activism before and during the Games.

“Staging the Games in Russia with these laws in place is like holding the Olympics in Johannesburg (South Africa) at the height of apartheid,” said Andre Banks, executive director of All Out. “President Putin will risk his country’s international reputation if these Games go ahead with laws in place that are in fundamental opposition to Olympic values.”

Yelena Goltsman, the founder of a New York-based gay-rights group for immigrants from the former Soviet Union, had called for moving the Games from Sochi to another country, but now says it’s too late for that.

Goltsman’s group, RUSA LGBT, is encouraging international corporations to withdraw their sponsorship of the Olympics or to flout the Russian law by including statements supporting gay rights in their commercials.