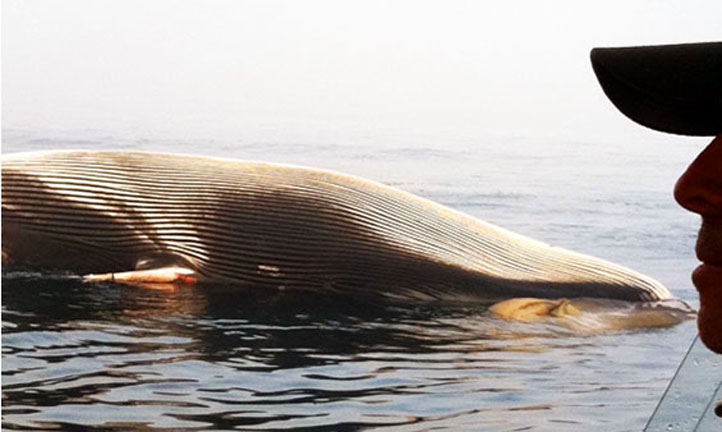 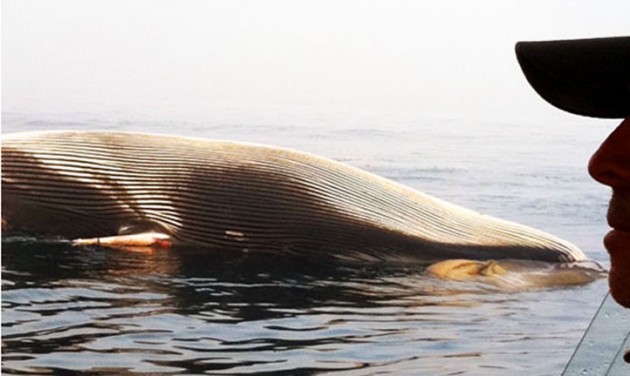 Surfers and whales are intrinsically linked – not just the fact that sharks take a bite of us both every now and again. Whales fascinate us, fill us with awe and move us to the point where we personally feel the loss when they are at risk or die. Robbins Thompson, a surfer, filmmaker and member of GaySurfers.net, is assisting in San Diego with the removal of a stranded dead whale. He generously gave me a few minutes to catch up with what’s happening with the whale, and his life in general.

GS So you have a 67 foot whale on a beach in San Diego, a billionaire entrepreneur and no doubt media everywhere – What’s happening?
RT Well it’s not that uncommon to have a whale or two wash ashore here in Southern California every year. This is actually the 3rd one I’ve been involved with over the last few years. The first was Blue that washed ashore in Ventura California. Probably due to sonar testing by the navy – though they don’t like to admit it. That was interesting as the rib vessel, powerboat, we were on actually got bitten by a great white shark, popping one of the pontoons. It’s started like “How cool a great white” and quickly digressed to “Oh shit it’s eating the boat.” Not the first rib I’ve had bitten by a shark.

GS And you’re going to do some filming? Does that mean you’ll be in a submarine or how will that work?
RT This particular Whale, A Fin Back Whale, washed up at Point Loma San Diego- a fairly popular surfing area. I was hired to film the removal and possibly some further footage once they figure out what they’re going to
do with it. The Fin Back was a pregnant female so first thing will be an autopsy, then Richard Branson is interested in taking it out to sea and feeding it to the sharks while filming it from below in a submersible. Though I’m filming some of the surface stuff, I’d love to get in the water and film the sharks feeding. We’ll see! 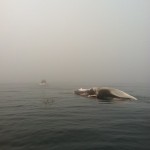 GS You’re a surfer and filmmaker, you must have shot some amazing moments in your time. Any stand outs for you?
RT In my earlier years, as a pro surfer, I was involved in a lot of discovery trips in Mexico. I was one of the first to be photographed Surfing Todos Santos island and I think the first guy to ever surf Isla Natividad, both in Baja California. I did decades of trips to places along the Mexican mainland and Central American coast that are popular now. Back then we just didn’t bother to name them. There was always another wave around the corner. As a filmmaker, I’ve filmed a lot of surfing but was always more into the exploration, discovery, lifestyle aspects. There are so many people filming the “pros”, I don’t know, it doesn’t interest me much. Oh I love to watch it and the guys today are unbelievable, but for most surfers, I think it’s that adventure and sharing the experience with friends that is the heart and soul of the surfing lifestyle.

GS So you’ve been sailing on your boat and surfing for about 16 years, you must have found some great waves?
RT My Parents were big sailors and adventurers so pretty much from birth I’ve lived on a boat and sailed. But really got back into it in the late 90’s. It started by wanting to do the west coast of Mexico and Central America. All those places I had been to earlier in my life where I had seen potential for discovery just beyond my ability to get there. So my partner and I set off and found a lot of great waves. A classic was in 2000, I was in a place called Huatulco, south of Puerto Escondido and my transmission had blown out, so I was stuck there for a few months. I met some guys working at a Club Med in the area and they took us to this little beach break that they said was too hard for them to ride on their body boards. I was curios so went with them one day. What I found was probably one of the best waves I have ever surfed. I surfed it every day for two months, usually alone. It broke from 3 feet to 15 feet and threw down 300 meter long barrels. Heavy, mind boggling barrels. I’m not the only person to think so, as the Rip Curl Search was held there a few years back and the WCT guys still say it was the all time best contest ever seen on the dream tour. Won by *A.I.!
Another spot was in the middle of the Pacific Ocean 450 miles from Tonga – tow-in waves. Big, gnarly and another spot I was in a rubber dinghy that got bitten by a shark.

GS Are you experimental with your surfing equipment?
RT I’ve always been pretty experimental with my boards. Early in my career, I worked for Hobies in the San Clemente area, and was in charge of the surfboard department so I had not only access to as many boards as I
wanted but got to work with some of the best board skinners in the biz – back then. I’ve always liked riding shorter boards and play around a lot with bottom contours and fin designs and placement. It’s great to see the
progression in the design, but it’s heartening to know that anything will work. Most sports start as pleasurable past times and become so fine tuned that the creative is weaned out of them. They become mathematically differentiated activities and it takes a computer to tell you who’s winning or even good. Surfing is about chaos and trying, not so much to tame it, as not let it eat you. I think there is something heartening about a lifestyle and physical activity that is based on personal creativity and not computer clarification. Of late, I haven’t been surfing as much as I would like. I got Malaria in Vanuatu and between recovering from that and building a new boat, well it takes time.

GS What are your plans for both your own surfing and your filmmaking in 2012?
RT Main thing for me now is to get back in the water and surfing more. I’ve got a lot of projects on the table but most of them have moved me away from surfing and I think I need to adjust that. I’ve never been anything but a surfer and it’s all I’ve really ever wanted to be. Sometimes you’ve got to remember who you are and what you are.

Story by David Wakefield for Gaysurfers.net

7 thoughts on “Robbins, a Whale and that Perfect Wave.”