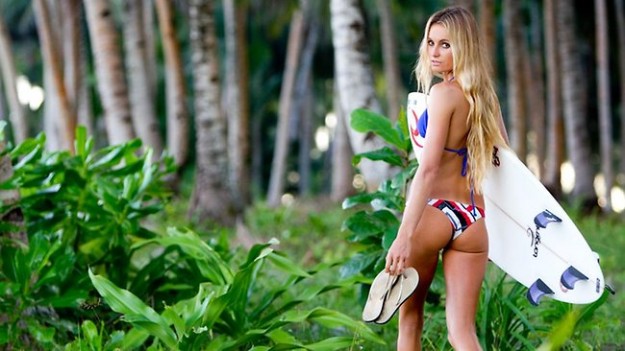 Written by Cori Schumacher. Originally published by The Inertia on May 30th, 2011.

In the world of surfing, as in any other cultural hegemony that values American masculinity to the exclusion of other perspectives, the feminine is the Other, the “like me but hotter,” and is conceived of as an object with a greater or lesser ability to sexually arouse the male libido… the woman. Masculinity is perceived as the virile, risk-taking, aggressive and valorized male who dominates waves and women. Each stereotype carries consequences. For women, being objectified and reduced to their ability to arouse the male libido can exclude them as they age, occlude their accomplishments, lead to eating disorders, open them up to sexual violence, etc. For men, risk-taking and aggression can lead to death by monster-wave-hold-down, brawls in the line-up, imprisonment, substance abuse, overdose, or countless other problems.

The oligarchy of the surf industry (the Association of Surfing Professionals [ASP], surf clothing and accessories companies, surfboard manufacturers, surf media, etc.) ignores the consequences of the gender driven stereotype. It goes to great lengths to create and maintain these images within surfing as it attempts to move from a marginalized sport to a more mainstream, higher profit-making institution. Sports have been estimated to be the sixth largest industry in the United States, averaging between $213-324 billion annually. The surf industry regulates the identity of surfers so it can present a unified, “clean” image to emerging global markets in order to get a larger slice of the pie. The vision of surfing is tailored from the top down, with surfers being presented to the world-at-large as a homogenized group through event broadcasting and media content.

The majority of the ASP’s money originates from the largest surf brands: Quiksilver, Billabong, Rip Curl and O’Neill. These surf companies are able to make decisions about surf events through two “event representative” seats on the ASP’s board of directors. Of the seven seats available, two have recently been given to independent directors, Angus Murray and Kathy Kendrick, who bring a more global, mainstream vision into the boardroom. Murray offers experience with the sponsorship, online/new media and mobile marketing of Formula 1 while Kendrick hails from the Walt Disney Company and Dreamworks SKG. These independent consultants were brought in, not from the sport of surfing, but from within the business world–a world that values image over integrity and marketing over principles. Recent changes to the ASP tour illustrate a renewed surge within the surf industry toward mainstream acceptance with a loss in quality of events for surfers.

The oligarchy established by the largest surf brands also exerts massive control over the content of surf media. They have been known to walk into the main surf media offices in order to pick and choose what audiences/consumers see in the surf media. Maintaining and directing the image of surfing through the media is of paramount importance. This is most obvious, not through those stories and images that are printed, but in the limited amount of content that provides dissident opinions, voices or viewpoints.

This is also made clear through the actions and words of those entrenched in the surf media as they take the time to attack or otherwise intimidate emerging online media outlets that seek to present diverse viewpoints on surfing, surfers and surfing’s cultural hegemony.

Stories submitted that might damage the image the surf industry wishes to portray are ignored or the writers paid a kill fee, ostensibly to keep a controversial story out of the surfing conscious. Blatant shock-jock stories aside (they prey on aggravation and hostility while having no consciousness altering value), controversy is pervasive in mainstream media and while the value of controversy might be argued, its absence in surf media suggests the fragility of the image the surf industry is seeking to maintain. The surf media wishes to appear devoid of any controversy, at any cost, in order to maintain a “clean” image.

What is this carefully constructed and closely monitored image? A quick content analysis of any surf print magazine or online surf site shows surfing to be an activity primarily composed of white, risk-taking, athletic, heterosexual men. Surfing certainly isn’t touted for its diversity.

One group that seems to have had a modicum of success penetrating the projected image is that of female surfers (there were more pictures of women in the June 2011 print issues of Surfer, Surfing and TWS than non-white males). This may be a deceptive snapshot, however, given that the June print issue of Surfing Magazine spent two pages advertising its swimsuit issue and the upcoming Nike 6.0 Leave a Message women’s surf film. This film prompted a story in the June print issue of Surfer Magazine along with ads in each magazine. For every one picture of a woman in these three print issues, seven of men could be found. For every one shot of a woman actually surfing, there were twelve and a half more images of men surfing. Unfortunately, in both image and content, the surf media is right in-line with mainstream sports whose own media often trivializes and minimizes the accomplishments of female athletes.

In case the recent rumors of top female surfers (promulgated either by the surf industry or complicit female surfers competing for limited financial resources) has led you to believe that the overtly sexualized, good-looking, shrinking-bikini-clad, flirtatious, ever younger crop of emphatically feminine ladies are more empowered than ever, why do they consistently get stuck surfing the worst conditions in contests? Why are they first in line to lose events held at great waves? Why do they feel they have to surf in a bathing suit as a surfer, adding to still existent body image issues? Why are their salaries and prize money being compared to past women even as their surfing is judged against their current male counterparts? (In 1976, when women were first being paid for being professional surfers, 20% of the total prize purse was allocated to them. In 2011, 22% of the total prize purse goes to female surfers. For every $1 a female surfer makes in prize money on the ASP World Tour today, her male counterpart makes $3.45). Why are female surfers competing with models for sponsorships? Why is more prestige and exposure given to the more attractive of female surfers vs. those that win contests and perform better?

An emphasis on a body-positive image is, in itself, empowering, but when abdicated to the overwhelming androcentrism found in surfing, it ceases to be empowering in any efficacious regard.

When I was a younger professional surfer, anorexia and bulimia were (and perhaps still are) problems for female surfers. The reason for this revolved around an accepted view of the “feminine” being thin and without musculature. The most tragic aspect of this was that women who were aware that other women had these problems would rarely speak up. A large group of women supported this unhealthy image of the feminine, either by actively engaging in the behaviors ourselves, or by being de facto partners to the status quo through silence. More emphasis was placed on how we looked than on how well we were surfing. This was true individually as well as institutionally.

Beginning in the ‘90s, a new generation of female surfers began to recast the athletic female body in a positive light. These ladies first had to overcome the institutionalized view that strength and athleticism were not feminine. They had to change their minds first and then the minds of those around them. The results of their struggle directly influenced how acceptable being a strong, competitive and athletic female surfer is today. It was by overcoming a stifling image of ourselves that we were able to refocus and literally reshape women’s surfing. For a while, this was accomplished under the noses of the largest surf brands. Women’s surf magazines sprung up, along with all female surf schools, women’s surf shops and women’s clothing lines. Advertising shifted away from the too-thin female surfer and female surfers began to surf stronger.

This movement fell short of placing ability over image precisely because of the entrenched perspective that values a woman’s looks as an indication of her femininity and the need of the surf industry to tightly control the image of surfing. The emerging female surfing economy finally grew large enough to attract the attention of the industry. The major surf brands effectively shut down the women’s surf magazines (denying advertising dollars and shifting this money to surfer-girl media newly introduced through the main surf publications where the surf brands could control how female surfers were presented) and began producing their own lines of women’s surf clothing. Retail stores felt the same pressure. Female surfers remained excited about the shift but unaware that this play was being made behind the scenes. Meanwhile, emerging all female surf brands slowly disappeared, all female surf shops closed their doors and only those surf schools that worked with the main brands remained. The four main brands effectively assimilated the movement. Then, they began the task of shaping the image of women’s surfing that would be most beneficial to growing their consumer base (which does not automatically equate to more female surfers).

The current image (long hair, athletic, slim-but-not-too-slim, flirtatious and heterosexual, always smiling, younger and younger, sexy and skin bearing) continues to feed into the status quo for female athletes that emphasizes ability as an accessory to beauty. It is unchallenging to the dominant male sexual economy and it is fueling the current re-emergence of the sexual objectification of women in surf media.

Though female surfers as a group may have had some success penetrating the dominant stereotype of “surfer” they have acquired their own burdensome stereotype along the way. The troubling thing about this is that the foremost professional female surfers seem unified in their support of the status quo. If there are some who are not, they are keeping quiet. How much of this is due to internal competition for the few resources female surfers do have? How much of this uniformity is due to the controlling influence of the surf industry? Are we to assume that Women’s Surfing 2.0 is exactly how we are fed it, given what we know of how the surf industry controls the image of its surfers?

The image of female surfers that emerges is not the surfer’s vision of herself (to what extent she has had an environment in which she might explore her own understanding of herself is questionable) but a tailored image that neatly fits into the androcentric values and expectations of the surfing world. Instead of accepting the current image of female surfers as empowered simply because they are wearing bikinis and say they want to (while shredding/charging/bottom-turning for that crotch shot) we should keep analyzing behind the scenes and pushing for more institutional change from the bottom-up. I propose we start with the sponsorship dynamic…

3 thoughts on “Proliferating Stereotypes for Profit”