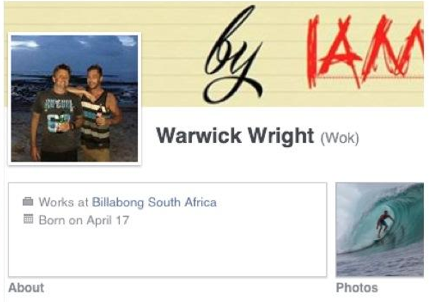 I’m sorry to be writing about this again.

I want to move on as much as the next person but when you read comments such as “your army of dykes” on a pro surfer’s Facebook post in 2013 it just can’t be ignored. The words are from Warwick Wright and directed at Cori Schumacher, who Warwick is accusing of getting Chad Wells fired. See below with props to Chris Grant for the eloquent response. 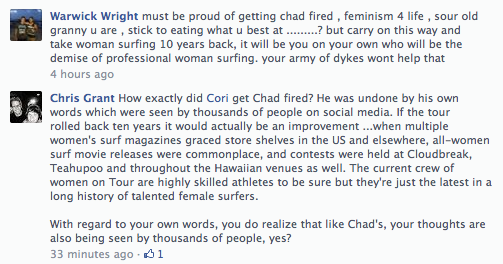 I think the fact the former Quiksilver staffer typed the words “some butchy lesbos…representing surfing” might have seen to that no? Of course no one likes to see anyone lose their job but surfing is meant to be a progressive sport and these comments are just so damaging, for gay surfers, especially young ones growing up, straight surfers and in fact all humans with a sense of right from wrong.

It’s like the sport of surfing is pressing the self-destruct button and the world is watching and saying what the f**k. We thought surfing was about beautiful waves in beautiful places, about sharing the stoke, and now we just think it’s a joke.