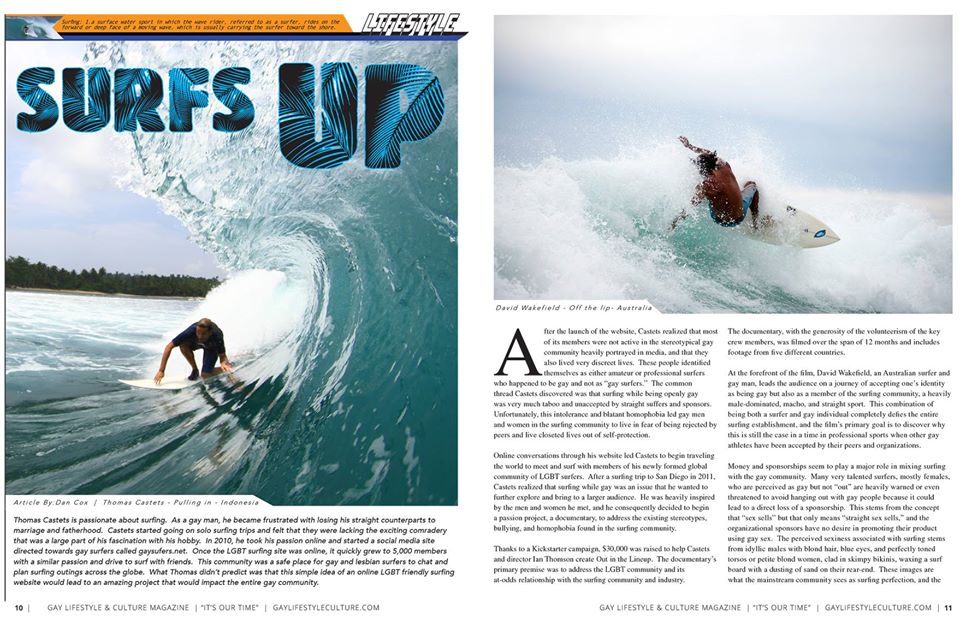 New magazine GLC reviewed “OUT in the line-up” as one of the 4 feature articles in the Summer issue
“SURFS UP” By: Article By:Dan Cox
For full Article Download Visit
http://issuu.com/glcmag/docs/glc_final_june2015_2 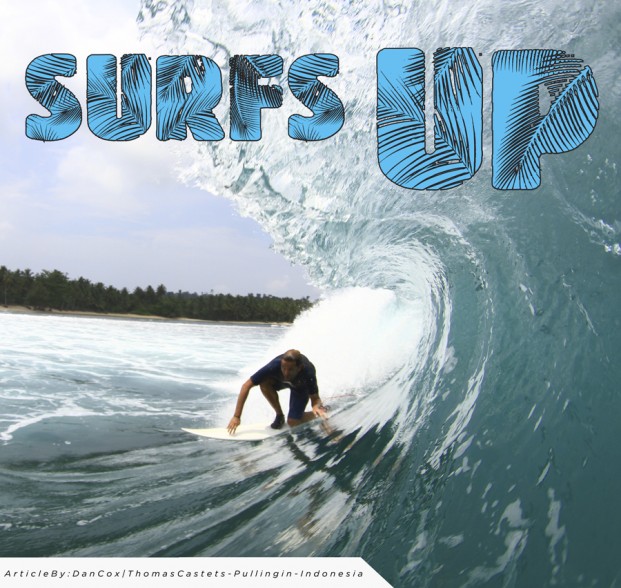 Thomas Castets is passionate about surfing. As a gay man, he be came frustrated with losing his straight counterparts to marriage and fatherhood. Castets started going on solo surfing trips and felt that they were lacking the exciting comradery that was a large part of his fascination with his hobby. In 2010, he took his passion online and started a social media site directed towards gay surfers called gaysufers.net. Once the LGBT surfing site was online, it quickly grew to 5,000 members with a similar passion and drive to surf with friends. This community was a safe place for gay and lesbian surfers to chat and plan surfing outings across the globe. What Thomas didn’t predict was that this simple idea of an online LGBT friendly surfing website would lead to an amazing project that would impact the entire gay community.
After the launch of the website, Castets realized that most of its members were not active in the stereotypical gay community heavily portrayed in media, and that they also lived very discreet lives. These people identified themselves as either amateur or professional surfers who happened to be gay and not as “gay surfers.” The common thread Castets discovered was that surfing while being openly gay was very much taboo and unaccepted by straight suffers and sponsors. Unfortunately, this intolerance and blatant homophobia led gay men and women in the surfing community to live in fear of being rejected by peers and live closeted lives out of self-protection.
Online conversations through his website led Castets to begin travelling the world to meet and surf with members of his newly formed global community of LGBT surfers. After a surfing trip to San Diego in 2011, Castets realized that surfing while gay was an issue that he wanted to further explore and bring to a larger audience. He was heavily inspired by the men and women he met, and he consequently decided to begin a passion project, a documentary, to address the existing stereotypes, bullying, and homophobia found in the surfing community.
Thanks to a Kickstarter campaign, $30,000 was raised to help Castets and director Ian Thomson create Out in the Lineup. The documentary’s primary premise was to address the LGBT community and its at-odds relationship with the surfing community and industry.

The documentary, with the generosity of the volunteerism of the key crew members, was filmed over the span of 12 months and includes footage from five different countries.
At the forefront of the film, David Wakefield, an Australian surfer and gay man, leads the audience on a journey of accepting one’s identity as being gay but also as a member of the surfing community, a heavily male-dominated, macho, and straight sport. This combination of being both a surfer and gay individual completely defies the entire surfing establishment, and the film’s primary goal is to discover why this is still the case in a time in professional sports when other gay athletes have been accepted by their peers and organizations. 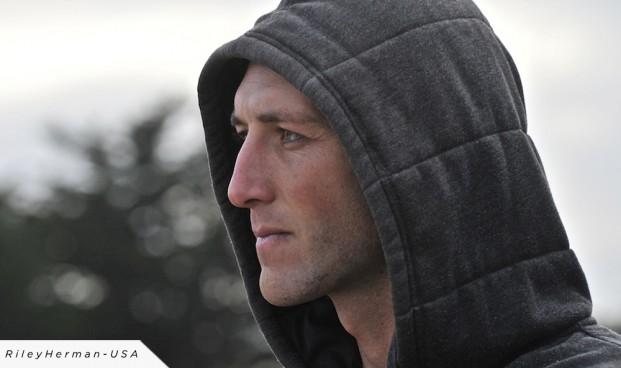 Money and sponsorships seem to play a major role in mixing surfing with the gay community. Many very talented surfers, mostly females, who are perceived as gay but not “out” are heavily warned or even threatened to avoid hanging out with gay people because it could lead to a direct loss of a sponsorship. This stems from the concept that “sex sells” but that only means “straight sex sells,” and the organizational sponsors have no desire in promoting their product using gay sex. The perceived sexiness associated with surfing stems from idyllic males with blond hair, blue eyes, and perfectly toned torsos or petite blond women, clad in skimpy bikinis, waxing a surf board with a dusting of sand on their rear-end. These images are what the mainstream community sees as surfing perfection, and the sponsors want to appeal to their largest audience. In 2015, the World Surf League’s (WSL) rulebook states that there is a zero tolerance policy for any form of discrimination, sexual harassment, or abuse in the sport of surfing. Ironically, when Thomson and Castets attempted to interview one of the leading surf organizations on camera to discuss homophobia and discrimination, they met aversion. The footage initially filmed from the company’s representative decided to withdraw his interview, and the entire segment had to be cut from the final product. This event only strengthens the idea that surfing while gay is still a major issue and one that needs to be addressed. While the film centres on the surfing community, the message that Castets and Thomson create transcends surfing and the gay community. It reaches LGBT individuals from all walks of life. People across the world live their own individual lives and rarely experience the struggles and injustices others encounter on a daily basis. We are simply unaware of the plights of others. The film addresses that we are all different human beings. We have different interests, jobs, hobbies, and lifestyles, and that is okay. Our sexual orientation is only a part of who we are as people. It does not define us. It does not establish our identity. Out in the Line-up is an inspirational tale for anyone who has ever felt like an outsider.

DOWNLOAD THE FULL ISSUE!
Please enter your name & email address in the form provided. You will receive a download link in your inbox shortly after. Easy! 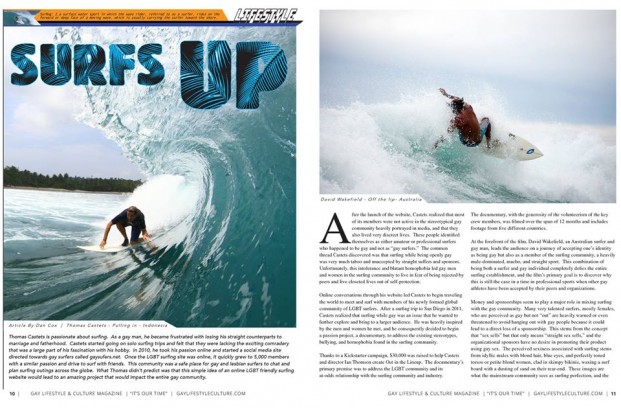 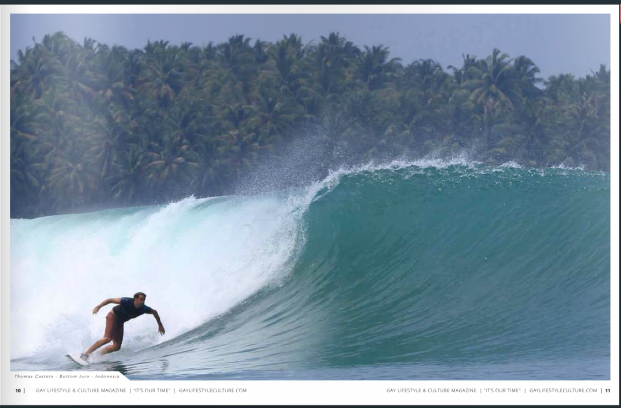 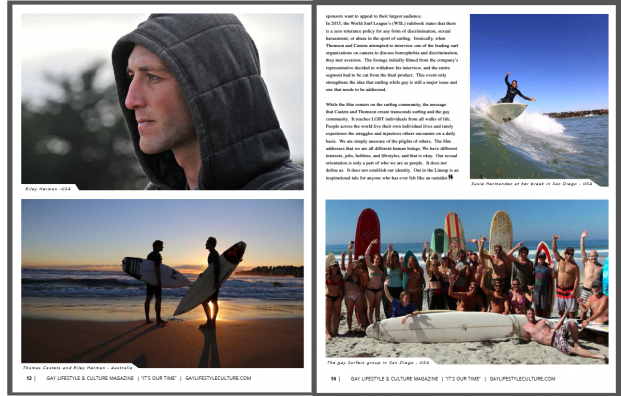