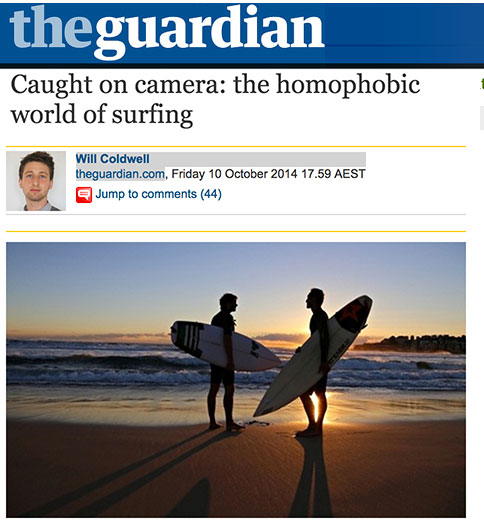 A new documentary shines a light on gay surfers around the world, and finds secret lives, struggles for sponsorship – and even suicides

Written by Will Coldwell, Originally published by theguardian.com

When Thomas Castets sat down at his computer in Sydney four years ago and began writing a blog, he had one modest aim. “I thought it would be nice if I could find at least one other gay surfer out there,” he says. “And find out if they had some time to surf with me.”

Within two weeks, 300 people had got in touch. Now his website,gaysurfers.net, is a thriving social network with almost 6,000 members, ranging from former world champions to people living in villages in West Africa. And as the membership grew – to include many who thought they were only gay surfer in the world – so did the stories. Surfers, including many professional ones, were writing to Castets to explain how they had felt compelled to keep their sexuality secret, faced homophobia in the sport or struggled in the surf industry as a result of coming out.

Last year Thomas, along with Australian former state champion surfer David Wakefield – who chose not to pursue a surfing career out of a fear of being “found out” as gay – decided to go on a trip around the world to meet some of them. Their journey – captured in award-winning documentary Out in the Line-up, which premieres in the UK this week – sheds a light on the experiences of gay surfers around the world as it seeks to understand why the sport continues to struggle to be open about the issue.

Among the stories heard are that of former competitive surfer Susie Hernandez, whose fellow surfers and roommates moved out after finding out she was gay. And Robbins Thompson, who was a pro surfer in the 90s but dropped out of a tour after finding the word “fag” spray-painted on his car. It also touches on the tragic case of Ben Roper, a young gay surfer from one of Sydney’s infamous surf gangs, the Bra Boys, who killed himself last year.

“Surfing is still locked in its old stereotypes from the 60s,” says Castets, describing the tanned, blond, ripped, definitely heterosexual nomad most of us still imagine when we think of a surfer. “There’s not much room for the individual in surfing.”

One surfer who struggled to reconcile herself with this conformist image is Keala Kennelly, a talented pro surfer (as well as a DJ and actor) from the Hawaiian island of Kauai, who caught the attention of sponsors aged just 17. At the time, she felt unable to admit that she was gay.

“I have seen so many talented female surfers come and go because they didn’t have the support from the surfing industry due to the fact that they were either gay, suspected of being gay, not feminine enough or they simply did not fit the image that brands believe sells product,” she says.

Kennelly felt she had no choice but to suppress her sexuality if she wanted a successful career. “I lived in fear,” she says. “Even though I knew I liked women, I wouldn’t act on it. I slept with boys instead. Years passed; I kept up the facade. I had become one of the top pro surfers in the world, as I had always dreamed, but my happiness was overshadowed by this dark secret I was keeping. I suffered in silence to keep the surfing industry happy, to keep my sponsors happy.”

Eventually, she reached a point when she could no longer take the pressure of hiding her sexuality, and she slowly began to tell people the truth. While she finally felt “free”, she also feels her career was affected. “To come out as gay in the surfing industry is to step out of the bounds of what is considered ‘marketable’, so I suffered the consequences of that,” she says.

For Ian Thomson, who directed the documentary and is himself gay and a surfer, it is not just the professional aspect of surfing that can feel very hostile to a gay person. “You hear a lot of homophobic banter out there,” he says. “These days, it’s all about intimidating others to get the best waves. The way a lot of the guys do that is by putting other people down, and homophobic slurs are part of that. If you are gay, it is very confronting. And you get this message that if in any way I show my true self – my homosexuality – I’m just gonna get massacred out here.”

The issue of homosexuality and surfing draws in a lot of wider problems the sport has with diversity in general – something that seems at odds with the easy-going, counterculture lifestyle many feel it represents. There is still yet to be an openly gay male pro surfer at the elite level who is currently on tour – despite the fact that more traditional sports, such as football, rugby and boxing, have had successful athletes come out.

“There are a lot of reasons why surfing has this problem,” says Castets. “One cause is that surfing is, unfortunately, primarily a male-dominated sport. And when you have all these men travelling together, hunting for waves, there is an element to the psychology that is about making sure there is no ambiguity between the men. To prove your heterosexuality, you need to prove your skills in the water. And another cause is just that there have never really been any gay surfers out there, so I would just call that ignorance and a lack of visibility.”

The marketing of surfing is also markedly heterosexual. It is dominated by white men, and female surfers are frequently objectified – an issue that came to the fore last September, when sports clothing brand Roxy ran an advert for a surf competition featuring seductive shots of surfer Stephanie Gilmore’s body, without any footage of her actually surfing. As Kennelly says, female surfers are required to be “straight, young, feminine, pretty … oh yeah, and a talented surfer”.

Thomson and Castets struggled to get the voice of contemporary, mainstream surfing in the documentary. They made repeated attempts to contact star surfer Kelly Slater – who has spoken in the past about suicide awareness, and showed support for the charity Surfers Against Suicide – but were unsuccessful. Not one straight professional surfer they approached was prepared to speak publicly about the issue on film.

Leading surf organisations responded with equal aversion. Surfing Australia declined to comment, while the Association of Surfing Professionals agreed to go on film, but then withdrew permission to run the interview at late notice. “That’s when we realised it was a real taboo,” says Thomson. “They just don’t want to know about it and they don’t want to talk about it. But then in their backyards there are people killing themselves, people suffering from depression, surfers having great careers cut short by what’s going on. So that ‘don’t ask, don’t tell’ mentality, which ultimately didn’t work for the US military, cannot work in the future for surfing either.”

The aim of the film – which has been shortlisted to be used as part of the education programme in Australian high schools – is not simply to challenge homophobia in surfing, but also to help redefine and modernise the image of homosexuality in general.

“The media is still picturing gay people as living in the city, wearing the same clothes, going to parties …” says Castets, who feels that the perception of gay culture – in a similar way to surfing – hasn’t evolved much since the 80s. “I thought if we were able to make this film, we would be able to change that stereotype and show a new image of what it is to be gay in 2014. It goes beyond just gay surfers. It is a story about being able to live your life the way you are, without being bound by the stereotypes of the subculture.”

• The UK premiere of Out in the Line-up is on Sunday 12 October at The Genesis, London, as part of the London Surf Film festival,londonsurffilmfestival.com.