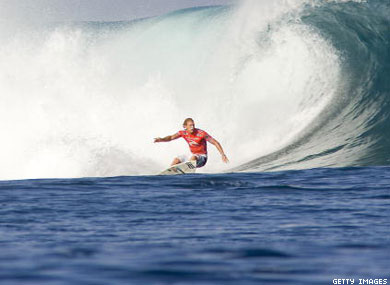 Originally published by The Advocate (The national gay & lesbian news magazine) on November 25, 1997 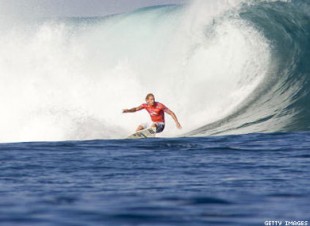 The wisecracks and contemptuous stares came as no surprise. Thompson, 34, says he ended his surfing career two years ago because of too many nagging questions, innuendos, and off-color remarks regarding his homosexuality. The surfing world Thompson saw did not jibe with images of carefree, laid-back wave riders who live by the credo, To each his own.

“Sometimes it was difficult trying to keep my concentration, wondering what everybody was thinking about me,” says Thompson, who began to hear antigay comments in the water and found the word fag spray-painted on his car several times as his sexuality became known to other surfers on the Association of Surfing Professionals tour.

Relationships with other surfers became an impossibility, Thompson says, so he isolated himself. “If I spent too much time with fellow surfers, accusations would start to fly. There were a couple of times when possible relationships [with other gay surfers] ended too quickly because of fear of being caught.”

As it is for many athletes in professional sports, success is measured not only by performance but also by securing sponsorships. Multimillion-dollar companies often turn to surfers when marketing their products for the sun-and-sand set.

Steven Clark, team and promotions manager for sportswear manufacturer Gotcha International, admits that an openly gay surfer would have a difficult time finding sponsors. “Professional surfing is definitely a hetero sport,” Clark says. “That’s just the way it is. I know I’m being hypocritical when I say this, because I grew up inLaguna Beach [a California city with a large gay population] and I have gay friends. But from a business standpoint, sponsoring a gay surfer would not make sense right now.”

Gotcha spends more than half a million dollars a year on sponsorships. Clark says a gay surfer would be a media problem and agrees that there would be a tremendous amount of harassment from other surfers on the circuit.

Sponsorships are critical because earnings from surfing competitions are miniscule compared to those of other sports. Even top professional surfers may earn only about $50,000 a year from competitions. So pro surfers need major sponsorships to continue on the expensive tour. “My first years on the tour were spent buying one-way tickets from contest to contest, hoping I would make enough money to get to the next event,” says Thompson, who was rated in the top five in the United States from 1983 through 1987 and who won more than ten events during his career. “The need for major sponsors to continue on the tour and the subjectiveness of the judging system mean that competitors cannot let their personal lifestyles be an issue. Rumor and innuendo about one’s sexuality have destroyed promising careers.”

Thompson says he knows that homosexuality is not salable to the corporate players involved in the industry. “If the corporations that control sporting events decided that homosexuals were a viable advertising market, things would change quickly,” he says. “In a perfect world all sponsorships would be unbiased, and competitive surfing would be based entirely on one’s ability in the water. I guess that’s not a realistic scenario at this point.”

Thompson, who now works as a contract developer but continues to surf almost daily, believes homophobia is rampant on the surfing circuit. Worse yet, he’s not hopeful it’s going to change any time soon. “Trying to make it as an out surfer would right now be pretty much impossible,” Thompson says. “Soliciting sponsorships would be greeted with a `Don’t let the door smack your ass on the way out’ type of attitude. Trying to deal with your fellow competitors on the road 12 months out of the year would just be an invitation for harassment.”

3 thoughts on “Beached by homophobia; how Robbins Thompson caught a wave of antigay sentiment and quit the professional surfing circuit.”