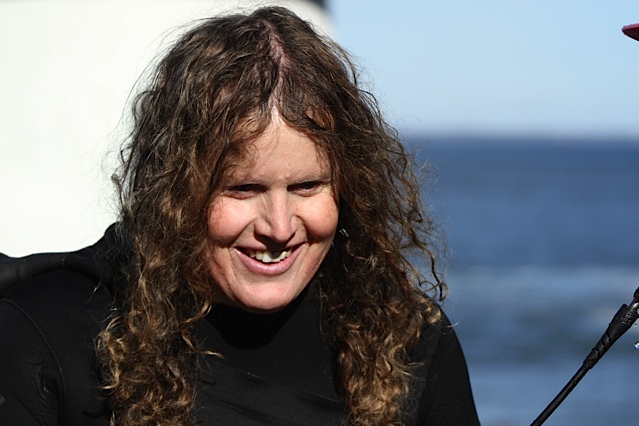 My epiphany came in the glare of the setting sun through my windshield as I drove the winding back roads home after an amazing autumn session in overhead, offshore conditions. Ask any New Englander what their favorite season is and they will invariably answer: Fall. The burnt oranges, reds, and amber leaves of deciduous trees, the crisp air and cerulean hued skies, the scents of pine and salt air, pumpkins and apples at harvest, render both the sea and landscape a fantasyland of color, a smorgasbord for all the senses. Steering my car, subliminally registering the abstract blur of transitional colors, flushed with the après surf glow of a good session where I’d caught so many incredible waves, in fact probably my best wave of the entire year, it dawned on me as I crested that little hill in the road and the full luminance of that orange globe flared through my windshield, alighting not only the interior of my car but the dark corners of my cloistered inner consciousness.

The swell came product of a low pressure system that had swirled up the coast before spiraling off into the upper North Atlantic. These “Nor’easters” are the predominant swell generators for New England surfers and the best conditions come after the storm when the wind backs around with incoming high pressure and offshore winds groom what the previous day had been a gray and unruly chaos of whitewater and closeouts. On the best days, the waves can be world class and such was the case on this particular late afternoon session in October. I’ll never forget that wave, that day. The biggest set, maybe 3 ft overhead, of that session rolled in and I was in perfect position and caught a screaming wall with a hollow section that I came out of and the ride went on for almost 300 yds. Like a grom who’d just caught the best wave of their early surfing life, I emitted a long wailing hoot for almost the entire ride and when I paddled back to the lineup, I couldn’t seal my resulting Cheshire fissured face, nor did I care to, despite the fact that it’s never cool to actually self-acknowledge, or “claim” a good ride. But I just couldn’t help it. Flushed with exhilaration, I sat up on my board when I regained my position off the point and gazed off to the horizon with a post-coitus like rapture. The demons I’d battled on my drive to the beach that day, the voices in my head, the hurt in my heart, and despair in my soul, were for the moment, vanquished. Nothing else mattered but the endorphin rush, still coursing through my being. And as I sat waiting for the next set, my internal dialogue soothingly assured: “See…that’s all you need. That wave. That feeling, right there…you don’t need anything more than that. You don’t need to be a girl!”