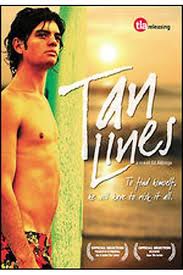 SURFING’S equivalent of Brokeback Mountain is being filmed on Sydney’s northern beaches. Directed by Ed Aldridge, a Brit, it’s called Tan Lines, about two gay surfers in a small town somewhere on the NSW coast, and managed a few media mentions here when announced last year.

But it took a London newspaper to discover that Manly surfers are outraged about it. The Independent on Sunday devoted a two-page spread in its latest issue to previewing the beginning of shooting this week, before it heads to Newcastle in March.

The paper interviewed a bunch of Manly’s finest, who excelled at creating a picture of a tolerant, welcoming suburb, including these quotes on gay surfers:

Clinton Moody said: “I’ve never bumped into any. There’s too much testosterone in the water for them.”

Mark Washington said: “It’s not the sort of environment to be openly gay. You have your shorts and boards – how can you be gay?” (We’re not sure what that means.)

Tim Plunkett said he didn’t have any problem with gay surfers, as long as they didn’t kiss between sets of waves. “I feel it’s more of a manly sport, and as gay men have more feminism in them, it’s not likely to appeal to them,” he said. (Try telling that to the women’s champion surfer, Layne Beachley.)

Meanwhile, Matt Wilson did his best to counter the prevailing view. “Many board riders are homophobic,” he said. “When you are a kid, you think it’s not cool to be gay. When you grow up, you realise how stupid you were.”

The Sindie found a gay surfing group in Melboring, which had more women than men, and told its readers of the origins of Manly: “named by an explorer after the confident and masculine local Aborigines”.

Director Aldridge didn’t get back to us by deadline, but if Brokeback Mountain is any guide, his film won’t enjoy a wide release. Despite the cowboy flick winning four Golden Globes, its distributor, Roadshow, has brought only 48 copies of the film into Australia. Compare that with the national number of screens on which these films are now showing: Chronicles of Narnia (412), King Kong (288), Rumour Has It (238), andMrs Henderson Presents (75).