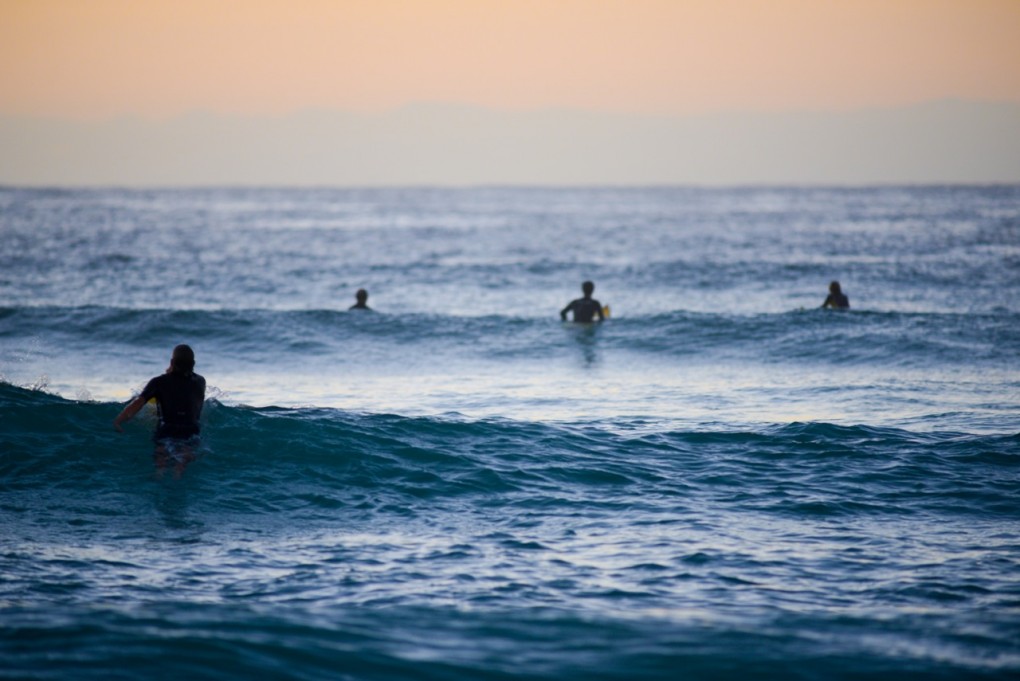 A new surf film has shone light on a lesser-known side to the surf community. Cynthia Krueger investigates why prejudice is still engrained in surfing today
Read more at http://mpora.com/articles/why-arent-there-more-out-gay-surfers#gEHxcb84PL7D7UuW.99

When I began surfing in earnest eight years ago, the first women I met in the ocean were gay. I didn’t think much of it, since I was living near San Francisco. But the men? None of them were homosexual – at least as far as I knew. It wasn’t until last week that I was out in the lineup with two guys who were “out” in the lineup.

One of those surfers was Thomas Castets, who produced the film OUT in the Lineup: Uncovering the Taboo of Homosexuality in Surfing. The full-length movie was shown to a sold-out crowd at the San Diego Surf Film Festival last Friday, where it won the Audience Choice award. The film follows Thomas and another Australian surfer as they explore why being gay is stigmatised in the surfing community.

“The first women I met in the ocean were gay. But the men? None of them were – as far as I knew…”

So why aren’t there more gay surfers out in the lineup? The answer is multi-faceted. It seems to be harder for men than for women, and more difficult for competitors of either sex than for freesurfers who ride waves just for fun.

There are clear indications that surfing lags behind other sports in accepting diversity. From baseball to wrestling, gay athletes are out of the closet. Even the National Football League in America has come around.

Last week, Michael Sam became the first openly gay player to be drafted. While gay athletes in other sports have been speaking out about their sexuality, surfing has been stubbornly slow to change.

Three-time world longboard champion Cori Schumacher, who lives with her wife north of San Diego, believes it’s because, unlike other sports, surfing is not associated with educational institutions.

For sports like basketball, football and swimming, “as you’re doing your sport, you’re learning at the same time – about anti-discrimination laws.” Surfing is detached from these learning experiences, so the norm is perpetuated. And the norm is not inclusive.

Schumacher thinks that gay men have a harder time being out than gay women, not only in the surfing community but in the general population as well. Since surfing developed primarily around groups of men, women were marginalised  and a line had to be drawn against interpreting male bonding within the group as homoerotic.

Evers explains: “you either objectify women, and that leads to sexism… or you work on the premise that we must prove our heterosexuality. We must prove that, hey, we’re not gay.”

Because surf culture has been built around the straight male, “when a gay surfer comes in, he challenges that heterosexual construct,” says Schumacher.

In all sports, she explains, it’s socially acceptable for men to touch each other and have physical contact without being considered homosexual, “but that boundary consistently has to be re-established through linguistic uses of ‘poofta’, ‘faggot’ and all of that.”

Women don’t challenge male sexuality, and even two women together can play into male fantasies. It’s the gay male that punctures the bubble of masculinity built up around the sport.

“While gay men are often made fun of for being weak, gay women are often made fun of for being ‘too tough,’” says Castets. Although gay women face different challenges from men – they form a minority of surfers, not only as homosexuals but as women – “both male and female gay surfers often prefer to keep their sexuality hidden by fear of being discriminated against.”

Filmgoer Ruth Moore* has been out since she was thirteen, but when she’s surfing, she “sometimes decides to keep my sexuality to myself to avoid homophobic interactions or tokenisation,” such as “come-ons or untoward comments because I’m a lesbian.”

It’s easy to hide while wearing a wetsuit, but a gay surfer’s ability to blend in has a downside. “When you paddle out in to the ocean, you’re moving away from all the stuff that’s on shore,” Schumacher explains. “There’s an escapism there, a freedom of just being able to express yourself fully on the wave.

For gay surfers who are closeted, there’s a missing element – and that shifts once you’re able to be completely you by coming out and having others recognise you as a whole person.

Those who are already out

Some gay surfers don’t hide in the water. Instead, they draw from the homosexual community to build their own lineup where they are free to be out. Paul Jones* is a surfer who attended the screening on Friday. He’s in the closet at work because he’s employed in the traditionally macho construction industry.

When Jones moved to San Diego, he met another gay surfer, and then another, and another, until they’d formed a network of gay guys who surf together. It’s a comfortable group where he can be himself.

Castets, who works as a web designer, decided to start his own website in 2010 to fill the lack. Since then, gaysurfers.net has grown to have over 5000 registered members.

Although the taboo against homosexuality is strong in every lineup, a gay surfer who moves from freesurfing to the world of competition faces additional challenges.

“Pro surfers rely on sponsors to survive,” Castets explains. “Since being gay is not the image that the brands want to promote, a lot of professional gay surfers have to hide” their sexuality.

Those who aspire to surf professionally are most likely to be closeted, Schumacher says. Freesurfers can embrace social change, “but when you get into the bubble of professionalism and industry, then… there’s a very, very narrow path that you have to walk if you want to be a professional surfer.”

The expectation is that nascent pros will replicate the current role models, and those role models are strictly defined – and not gay.

Female surfers who compete have to buck a different set of expectations than the men. Their current role model, presented almost uniformly by the surf brands, is young, blonde, white, sexy and straight, a “girl” who can play into the sexual fantasies of the young men who buy surf magazines. There’s scant room to deviate from the archetype, and little tolerance for diversity in sexuality or otherwise.In the film, gay pro surfer Keala Kennelly says that when she first got onto the professional surfing tour, “I was trying really hard to be straight ‘cause I knew that’s what they wanted me to be… They didn’t want people to be gay. They didn’t want to hear about it.”

At least women have a few role models. Schumacher, who is featured in the film, was not the first openly gay female pro surfer, but she was the first world champion to reveal her sexuality.

Male professional surfers who would like to stop hiding their homosexuality are going up against the deep-rooted macho, homophobic culture of the sport. Matt “Branno” Branson, described as a “man’s man” in the film, had to quit the professional tour to come out, and his admission stunned the surfing world.

Schumacher says that while there are no openly gay surfers on the tour today, she thinks that will change within the next five years, as a result of the film and what’s happening at the grassroots of the surfing community and within the larger culture of sports. “Surfing’s on the fringes of sport, and sport’s changing, so it’ll ripple out.”

Reaction to OUT in the Lineup has been positive, earning it an award (its fourth to date) and a standing ovation at the San Diego Surf Film Festival. Castets says it’s already effecting change. “During the shoot, many surfers refused to speak by fear of coming out, but now I think they feel inspired,” he says.

Six-time Irish Champion Craig Butler is a prime example. The making of the film spurred him to become a part of it and reveal on camera the big secret he’d been keeping about his sexuality.

For straight surfers and for the surf industry, Schumacher believes the film “makes visible the humanity of gay surfers” and will help increase acceptance in the water. For gay surfers, especially the closeted ones, the well-received film “is like a courage boost,” she says. “The door is open.”

* Names have been changed to respect the person’s privacy

1 thought on “Why Aren’t There More Openly Gay Surfers?”