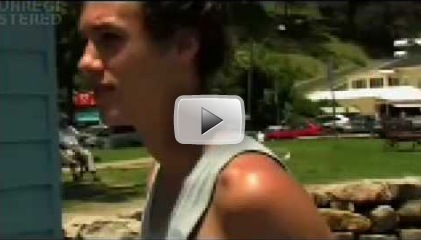 A hard-partying Australian surfer who divides most of his time between catching waves and inhaling bong hits begins to feel the claustrophobia of small-town life as he experiences a sexual awakening that will change the way he views the world around him in director Ed Aldridge’s sun soaked coming of age story. Midget Hollows (Jack Baxter) is a carefree teen who’s content just living it up on the beach with his free-spirited friends, but when Midget’s best friend’s gay brother returns to town after four years traveling Europe the conflicted surfer begins to experience an attraction he never anticipated. Not only does recently returned traveler Cass exhibit a worldly confidence that betrays his small town roots — he’s also a master on the waves who isn’t ashamed of his homosexuality. It isn’t long before Midget and Cass are caught up in a passionate affair, though he begins to sense a fundamental incompatibility with his newfound lifestyle and the close-minded culture that he inhabits. Now, despite Midget’s close bond with longtime gal pal Betty, he begins to weight the freedom of moving to a place where he can finally be himself against the deep roots he has within the community. ~ Jason Buchanan, All Movie Guide