With its chill, let-it-all-hang-out image – and its show-off-that-bodacious-body beach environment – you’d think surfing would offer a welcome haven for gay men in the larger, often homophobic sports world. 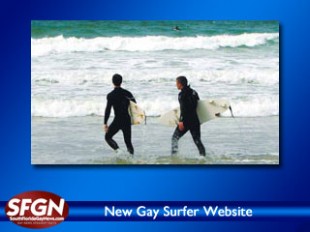 When a magazine article implied that rising star Cheyne Horan was gay, he lost endorsements and friends.

When a top-ranked surfer Robbins Thompson’s sexuality became known, he heard slurs in the water. On land, his car was vandalized.

And when young surfing sensation Shane Dorian was asked what he’d most like to eliminate from the world, he responded, “diseases, the Devil, flat spells (and) dykes and fags.”

Those incidents took place in the 1990s. The situation changed little through the past decade.

Earlier this year, all that changed.

Just four months after “Thomas” – a Frenchman who spent seven years in Australia, and prefers to not divulge his last name – started www.gaysurfers.net, the site had drawn over 1,500 members. Most came from the U.S., Australia and France. But it spread rapidly, and now there is solid representation from South Africa, the U.K., Spain, Italy, Indonesia, South America and India.

Users love the chance to search for other gay surfers, and send private messages. They have created groups and forums. They read surfing articles, and search for movies with “gay” and “surf” in the title.

“I believe there is a surf culture beyond the macho young man, and there are things we want to share with other gay surfers beyond dating,” Thomas told Australia’s gay magazine DNA. “I was hoping someone out there would build this community, but it never happened.”

So Thomas did it himself.

His social-networking site has two goals. One is to help gay surfers meet – including those deep in the closet. The other is to change public awareness by spotlighting gay surfers and bringing the sport’s homophobia into the bright sunshine.

One surfer called the sport “adolescent.” Teenage boys, he said, “are the least sure of their sexual orientation.” Having perhaps experimented with same-sex activity, they may “tilt toward homophobia as a means of denial.”

He believes there will be little change until “some courageous, high-profile dude, basically a pro, comes out and says ‘f— you homophobes.’”

An 18-year-old commenter on Gaysurfers.net said that geography has little to do with attitudes. “Sydney is supposed to host the biggest community of surfers in the world, and the second biggest gay community after San Francisco,” he wrote.

“But still no sign of gay surfers. I can’t seem to find any.”

Thomas said that the U.S. “seems to be the country with the biggest number of gay surfers.” Most, he noted, live in very open-minded places like San Francisco, Los Angeles, New York and Hawaii. Gay surfers from Hawaii are “very active on the site and supportive of the project.”

Several gay European surfers said they had found little hostility on the shores of their continent. They admitted, however, that they know very few other gay surfers.

Australia, by contrast, “has more rural communities of surfers that do experience homophobia,” Thomas said. One surfer from Down Under refused comment for the DNA story. Most gay surfers are still closeted, he said – “especially the older guys.”

“Gay surfers are all hiding somewhere,” a 26-year-old named Alan posted on Gaysurfers.net. “I hope here (too). In my hometown there are at least five gay surfers, but they keep their sexuality for themselves. I don’t know how to tell them that I am gay. Maybe they are on here?”

Gay surfers are not the only ones who read and comment on his website. It’s attracting straight people, too. They bring a variety of attitudes.

“Some don’t understand why gay surfers need their own space,” Thomas said. “Some others do get it, and think it’s a great idea.”

Perhaps, he added, surfers think their culture “expects” them to be homophobic. As they read and learn about the gay surfers in their midst, they “slowly open up to it.”

A heterosexual surfer named Scott wrote on the site: “I know sooo few gay surfers. It intrigues me. Surfing is for all who appreciate this world.” He offered to help “mediate with a straight’s perspective on surfing.”

As with most Internet ventures – especially one dedicated to a sport that puts a premium on looking hot – the talk often turns to sex.

“Quite honestly, I was hoping to see as many near-naked butt shots of guys as I see of girls in most surf magazines and website,” wrote one commenter.

But, he told Thomas, “thus far, you’ve kept it classy.”

_Dan Woog is a journalist, educator, soccer coach, gay activist, and author of the “Jocks” series of books on gay male athletes. Visit his website at www.danwoog.com. He can be reached care of this publication or at OutField@qsyndicate.com.