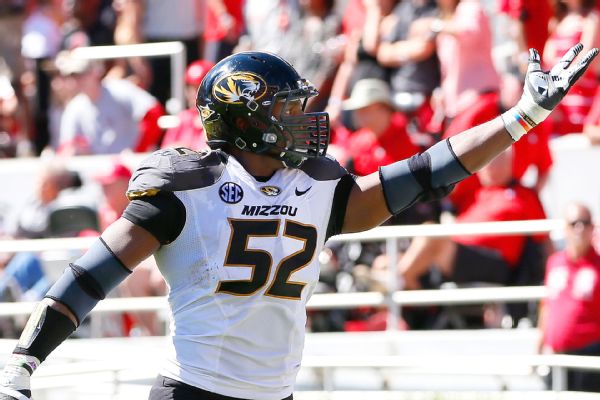 Michael Sam, an All-American defensive lineman from Missouri and the Associated Press’ SEC Defensive Player of the Year, said that he is gay in an interview with ESPN’s “Outside the Lines” on Sunday.

Sam stated publicly what his teammates and coaches at Mizzou have known since August: “I am an openly, proud gay man.”

Sam is eligible for the NFL draft in May. Assuming that he is drafted, Sam could become the first openly gay player in the history of the NFL.

“I understand how big this is,” he said. “It’s a big deal. No one has done this before. And it’s kind of a nervous process, but I know what I want to be … I want to be a football player in the NFL.”

In 2014, “Gay Man to Enter Workforce” has the everyday-occurrence sound of a headline in The Onion. But when the NFL is involved, it’s a first — and potentially a landmark moment — in the history of American sports.

Sam’s decision to speak out now — in interviews with ESPN and the New York Times — comes after his experience two weeks ago at the Senior Bowl, where, he said, many already seemed aware of his sexual orientation.

“I didn’t realize how many people actually knew, and I was afraid that someone would tell or leak something out about me,” he said. “I want to own my truth. … No one else should tell my story but me.”

He had already confided in a few close friends, Sam recalled, and had dated a fellow athlete who was not a football player — so while coming out to his Mizzou teammates last year was a key moment, it came almost as an afterthought, during preseason training camp.

“Coaches just wanted to know a little about ourselves, our majors, where we’re from, and something that no one knows about you,” Sam said. “And I used that opportunity just to tell them that I was gay. And their reaction was like, ‘Michael Sam finally told us.’ ”

Asked what that moment felt like, Sam said, “I was kind of scared, even though they already knew. Just to see their reaction was awesome. They supported me from Day One. I couldn’t have better teammates. … I’m telling you what: I wouldn’t have the strength to do this today if I didn’t know how much support they’d given me this past semester.”

He did not ask them to keep his revelation a secret.

Missouri coach Gary Pinkel said in a statement that he’s proud of Sam.

“We’re really happy for Michael that he’s made the decision to announce this, and we’re proud of him and how he represents Mizzou,” Pinkel said. “Michael is a great example of just how important it is to be respectful of others, he’s taught a lot of people here first-hand that it doesn’t matter what your background is, or your personal orientation, we’re all on the same team and we all support each other.”

Raised in the small town of Hitchcock, Texas, Sam said he grew up uncertain about what his sexual orientation was.

“I knew from a young age that I was attracted to guys,” he said, “I didn’t know if it was a phase … I didn’t want to say, ‘Hey, I might be gay. I might be bi.’ I just didn’t know … I wanted to find who I was and make sure I knew what was comfortable. So I didn’t tell anyone growing up.”

Kevin C. Cox/Getty ImagesDefensive end Michael Sam says he told his Missouri teammates in August that he was gay and they “rallied around me and supported me.”

It was an upbringing, he said, filled with adversity.

“I endured so much in my past: seeing my older brother killed from a gunshot wound, not knowing that my oldest sister died when she was a baby and I never got the chance to meet her. My second oldest brother went missing in 1998, and me and my little sister were the last ones to see him … my other two brothers have been in and out of jail since 8th grade, currently both in jail.

“Telling the world I’m gay is nothing compared to that.”

Sam had dinner on Saturday with Dave Kopay, a former NFL player who said he was gay in 1975 — three years after his playing career ended.

On Sunday night, the NFL released a statement supporting Sam.

“We admire Michael Sam’s honesty and courage,” NFL senior vice president of communications Greg Aiello said in the statement. “Michael is a football player. Any player with ability and determination can succeed in the NFL. We look forward to welcoming and supporting Michael Sam in 2014.

Among other male pro athletes who have said they are gay, Jason Collins, a 12-year NBA veteran, came out in a Sports Illustrated article at the end of the 2012-13 regular season, but has not played for a team since. Midfielder Robbie Rogers became first openly gay male athlete to play in a U.S. professional team sports league when he entered a MLS game in May 2013.

Conner Mertens, a kicker for Willamette University, last month became the first active college football player in the U.S. to come out publicly.

Sam said that he realizes his revelation may engender a variety of reactions in the football world. “There will be negativity, negative reactions,” he said. “I expect that. … Everyone can say hurtful things and hateful things; I don’t let stuff like that distract me. But there are going to be positives. The positives will outweigh the negative.”

Public reaction has been impressive so far. Within the first hour of his announcement Sam gained over 18,000 Twitter followers.

Sam led the SEC with 11.5 sacks, and 19 tackles for a loss. Most NFL draft projections see him as a likely mid-round pick, with some saying Sam could go as high as the third round, with a possible position switch to outside linebacker. He is rated as the 12th-best outside pass rusher in the draft by ESPN Scouts Inc.

Sam said that despite some comments from current players, he doesn’t anticipate difficulty gaining acceptance in an NFL locker room.

“Hopefully it will be the same like my locker room,” he said. “It’s a workplace. if you’ve ever been in a Division I or pro locker room, it’s a business place. You want to act professional.”

“I understand how big this is. It’s a big deal. No one has done this before. And it’s kind of a nervous process, but I know what I want to be … I want to be a football player in the NFL.

Sam rejects the appalling slanders that sometimes have been hurled at gay men.

“I mean, people will talk about the stereotype of gays being in the locker room … to me, I think that it’s a little stereotyped that gay people are predators. It’s just very offensive.”

Other such negative stereotypes seem too absurd for him even to consider.

“If you led the SEC with 11.5 sacks and 19 tackles for losses?” he said, laughing. “If a gay person did that, I wouldn’t call that person weak.”

Just last week, he said, he came out to his parents, during a phone call.

“I told my mom and dad last week, and they just pretty much said, ‘We knew and we love you and support you,’ ” he said. “I’m their baby boy. I’m the first to go to college. I’m the first to graduate college. Something like this is just another milestone.

“And I love my hometown. I think when this story breaks, I think they’re just going to love me even more for who I am.”

Sam understands that his life is about to change forever; he said he is happy and proud to be speaking out at last.

“I’m not afraid to tell the world who I am. I’m Michael Sam: I’m a college graduate. I’m African American, and I’m gay,” he said. “I’m comfortable in my skin.”