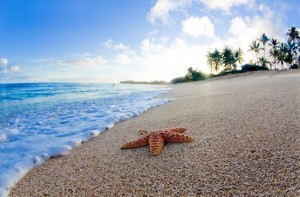 As surfers we all love to stare at photos of waves; big or small, most of us could mind surf anyone of them for hours. We also love to see our favorite pro and Joes risking it all for that perfect maneuver, death drop, or barrel shot – not to mention the wipeouts! However, what we all tend to forget is that there is actually someone on the other side of that picture; a brave cameraman/woman who sacrificed their time, safety, and sometimes sanity in pursuit of that photo you’re drooling over and surfing in your head. In honor of those that risk it all to bring us those precious and hard to capture images I set out to connect with a pioneer in the surf film industry and I was lucky enough to have the opportunity to interview the one and only Sean Davey. We were lucky enough to have our friends at Epson help set up the interview with Sean. He recently joined forces with Epson North America to help endorse their newest line of Epson Expedition printers. These new printers are capable of printing on multiple medias, including canvas, and now bring a greatly improved and unmatched print quality to the professional and amateur photographers.

Sean is a living legend and if you’ve ever opened a surf magazine or advertisement you’ve probably seen his work. Below are excerpts from our recent interview with Sean. 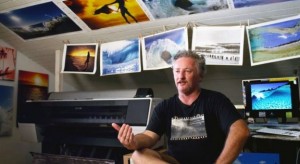 DAILYSTOKE: Tell us about your background?

I started taking pictures as a 15 year-old in 1977 at a small city beach called Bronte Beach in Sydney, AU. I had the stoke right from the first frame that I ever shot, and it just kept growing from that point on. I had my first surf photos published by Surfing Snaps Magazine back in the late 80?s, then Tracks, Australia Surfing Life, Surfing and other magazines all over the world after that. It was a great run while it lasted.

DAILYSTOKE: What made you decide to pursue photography as a living?

I just love to create photographs. I guess that deep down, it is the chosen medium in which to express my art. I’ve always had my own personal works which I viewed as my art, as opposed to much of the professional surfing which I was shooting at the time. That is not to say that I don’t go after surfing with a creative eye too, because I do. I do go out of my way to capture my work very differently than other photographers. I always prefer the alternative view in that respect.

DAILYSTOKE: When did you first discover your love for photography/surfing?

I always had an affinity for the beach for as long as I can remember, so it was natural that I would gravitate towards the surf scene. Once I discovered photography, surf photography was the perfect meld of both passions.

DAILYSTOKE: What or who inspires you and your work?

The sea more than anything really. It’s always changing the shorelines here. Hardly any 2 days are the same. Some things wash away, others arrive, everything moves in waves when you think about it. Back when I was younger, I was heavily influenced by Woody Woordworth, Warren Bolster and the fellas from Australian Surfing World magazine and Peter Crawford.

DAILYSTOKE: What have been some of your favorite locations to work?

I’ve tended to gravitate towards the pacific most of my career. I started out in New Zealand, then Samoa, Tonga, Fiji, Tahiti, Cook Islands, Hawaii, of course, then up into the Carolinas. Also did Ments back in 96 and again ten years later in 2006. The most notable difference was back in ‘96, there were just 3 boats that were all on great terms with each other. Some other cool places that I’ve been are the Cocos Keeling Islands and the Hebrides Islands off the west coast of Scotland. My favorite has always been Tasmania. It’s one place in Oz that will always hold its adventure appeal to anyone seeking a bit of a look around.

DAILYSTOKE: What is your all time favorite location to shoot?

I really dig shooting water photos here on the north shore when the winds drop to nothing and the water glows this light aqua color. Usually there’s only a handful of shooting days when all the elements come together though. The last couple of years have only produced like a half dozen days that are perfect for it….

There’s way too many of them. The best one is the one I found on the day….

DAILYSTOKE: Do you prefer to shoot from land, water, air?

I prefer the water because it’s fun to be part of it all coming together, not to mention, why wouldn’t you want to swim when it’s hot and the water looks so good?

Started with film, of course, but I didn’t wait long to go digital either because at the end of the day, I’m a realist. I knew that the surf industry would embrace digital eventually because of the massive savings on film and processing cost alone. Digital didn’t really become a threat to film until we had the 5D MKII. That was the game changer right there. I do believe that film is very slightly still a “bee’s dick” better than digital, if properly exposed, processed and scanned. However once cameras get 30 megapixels, that’ll be true end of the 35mm film as a serious quality alternative.

DAILYSTOKE: Do you have a camera that you use the most? What do you like about it?

That would be my Canon 5D MKII. I like it for several reasons:

21 true glorious megapixels.
Full frame luxury. I love full frame because your lenses are what they are supposed to be. You just can’t beat the real estate of a full frame sensor for ultimate quality. At the end of the day, I want the best that I can get.
The 5D MKII is so light compared to the 1 Series. Once I used the 5D MKII and then tried to use a 1 series camera it seemed so old and chunky. Considering what the 5D MKII and the 7D can do, it surprises me that they still build the 1 series cameras so big and heavy. It seems to be completely unnecessary to continue making them so large.
DAILYSTOKE: How has Epson helped with your photography?

Epson finally produced a canvas that gives me exactly what I see on my computer screen, simple as that. This canvas is really accurate and bright. It is easily the best canvas I’ve ever used, hands down. The difference is really obvious when I compare a print against an older print on different a canvas.

DAILYSTOKE: What was the last picture you took?

I photographed this one a few mornings ago…..

DAILYSTOKE: What’s some advice for someone just starting out and looking to become a surf photographer?

The best piece of advice is don’t do this for the money. The surf industry in particular is notorious for keeping its photographers poor. You should only become a surf photographer simply because you love to shoot it. Then if you do well, that’ll get the bonus. Seriously though, just shoot surf because you love to. You’ll get your best images that way too.

DAILYSTOKE: What projects do you have coming up?

I’m working on some projects with restaurants and some upcoming art shows for later in the year. I’ll probably head over to California in September too for the Santa Ana winds. It gets pretty photogenic on the coast around that time..

DAILYSTOKE: Is it possible for people to purchase any of your photos from you or elsewhere??

Yes, just log onto: http://www.seandavey.com, then select “Image Archive” from the pull down menus to get a look at my imagery, then fire an email to me directly at fineart@seandavey.com and I will be able to deal with you from that point on. I don’t charge for my signature either which makes it an attractive option for those who want one.

It was enlightening to hear Sean’s insight on the craft and his eclectic mix of experiences. Be sure to check out Sean’s site: www.seandavey.com to view his amazing collection of shots that will keep you drooling and mind surfing for days on end! Also be sure to check out the exciting new line of printers from Epson at: http://www.epson.com/. Lastly, based on Sean’s recommendation we are going to give one of these new printers from Epson a go. Check back soon for our review of the Epson Stylus Photo R2000 Ink Jet Print. It’s a mini version of Sean’s professional grade machine but it hosts most of the same bells and whistles, including the ability to print on canvas! Stoked and looking forward to reporting back to you guys…As always, thanks for reading and be sure to tell a friend!