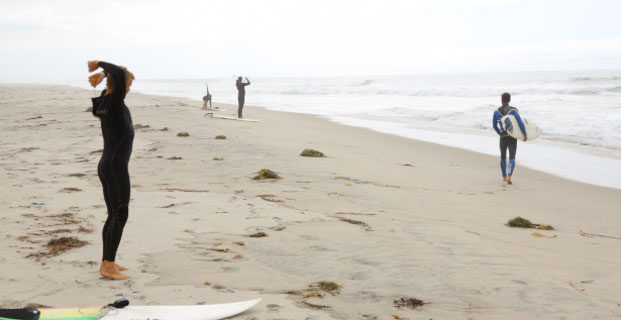 To date most of my excursions into Neptune’s domain have been in tropical waters, where one gets out of the water due to fatigue rather than the onset of hypothermia and wearing board shorts and a rash guard suffice. Thrice I’ve ventured into Nova Scotia waters where wearing a wet suit aids in one surviving long enough to paddle out through the break to where the waves can be caught. Much like Ryan Lochte, my bladder is stricken with the urge to purge when submerged in the Atlantic Ocean. Having my loins girded in skin tight neoprene while lying prone on a board exacerbates my bladder’s need to decompress. I’ve discovered that removing a wetsuit is not easily done surreptitiously in the line up and that I have only so much control over my excited bladder, so in consideration of the next person who would otherwise use my surf shop rental wetsuit I decide to buy my own personal body gear for those times when the call of nature wins over my laziness in getting out of my insulating second skin. Hey, if Olympians can pee in the pool… So off to the surf shop I go with my surfing buddy as moral support. Being a novice I’ve no idea what one looks for in a wetsuit, and Kudos to the surf shop dude with the Colgate smile and yards of patience for talking me through the process. One must experience the different styles of wetsuits to get the right fit. So into the change room I go with a selection of what up to this point I thought of as athletic wear only to discover that it really is torturous bondage gear in disguise. Not being familiar with a front zip suit, I have to emerge from behind the change room curtain half naked to get the sales rep to explain how I am to fit my 6 foot 195 pound frame into the 6 inch wide neck hole of the one piece suit – it wasn’t intuitive that I was to roll it down and peel it onto me. Thank goodness the change room had the climate of a Swedish Sauna because the ensuing rivulets of sweat lubricated my skin such that the neoprene eventually stopped acting like hair removal wax on my simian like body. Despite my attempts at looking cool and surfer dudish I stepped out of the change room in suit number one, seconds shy of complete claustrophobic hysteria – the only thing that kept me from hyperventilating was the fact I could not expand my chest enough to get more then 5cc’s of air into my lungs at a time. The neck piece was simultaneously crushing my larynx and shoving my adams apple into my gag reflex. My head looked like one of those cartoon thermometers about to burst forth their red liquid contents. The sales dude concurs it’s not quite the right fit. I peel off number one and peel on suit number two. In the process I somehow I get my elbow caught in the change room towel rack and break it off the wall. At least I can breathe semi-normally in suit two. Which gives me enough time to observe that skin tight neoprene leaves nothing to the imagination and the chicken pot pie I had for lunch now resembles a baby bump on an underfed runway model. I mimic a swimming motion and realize there isn’t enough stretch for basic paddling manoeuvres. Peel off and on again. I give up on suit three when I get to the point where in an attempt to get my shoulders in the suit my arms are now stuck to the side of my head as if they protrude from my ears at their elbows. My shoulders are near dislocation and I ponder which will be more embarrassing for the surf shop: A) find a client in their dressing room, self-asphixiated while trapped in their neoprene bondage gear, or B) have emergency services show up with the jaws of life to extradite a client from said bondage gear. One final ”oomph” releases my entrapment and saves the surf shop a write up in the local paper’s bizarre news column. Despite this process taking much longer then anticipated my moral support surf buddy is quite content to sit and wait in the company of Mr. Colgate Smile while a myriad of surfer dudes come and go through the shop. She gives pay back later while I hold her purse as she sorts through the sale rack at John David shoes. The patient sales dude comes to my rescue with a cheap model ”starter suit” he finds in the back room, that actually allows me to mimic the breathing and paddling techniques that will keep me afloat. I give one more suit a try, the best made most expensive of the choices – usually the choice that I naturally am drawn to but not today. The cheap neoprene is the most comfortable fit. I’ll take it thank you. By now the day has elapsed beyond having enough daylight to try out the new suit and as it turns out surf conditions never get good enough to bother taking out boards during the rest of our planned weekend surfing adventure. The test of success will have to wait, but I have survived wetsuit shopping trauma. To celebrate we meet friends for beer which somehow leads to a convoluted detour that finds me in the cargo hold of a malfunctioning Luftwaffe C-160 a day later. But that’s a different story…..