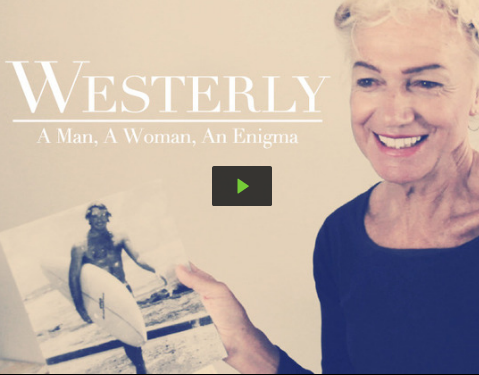 Westerly is a feature length documentary film about Peter Drouyn and his controversial metamorphosis into Westerly Windina. Peter Drouyn was one of surfing’s first superstars. A true visionary, he dominated the international competitive ranks in the ’60s and ’70s, invented man-on-man surfing, and introduced surfing to China. He was an actor, a lawyer, a father, a ladies’ man, and most of all, a chameleon.But there was much about Peter Drouyn that he kept private. As a child, he liked to dress up in women’s clothes. During his competitive years, he was hypersensitive and introspective amid a culture that was often macho, myopic, and sexist. For most of his career he felt ostracized. In the ’80s he drifted away from competitive surfing and all but disappeared.In 2002, Peter suffered a traumatic surfing accident that nearly drowned him. Not long after, Peter’s feminine side fully emerged. “It was a supernova,” said Westerly. “It just kicked in one night, and suddenly Peter went, Westerly was there.”In 2008, Peter Drouyn announced on Australian national television that he was living as a woman. His new name, she said, was Westerly Windina. The surf community—and Australia in general—was astonished and mostly repulsed. Since then, Westerly has been living in public housing on Australia’s Gold Coast. Her life is not easy. She is alone, poor, and often taunted by her neighbors.We will explore Westerly’s past as a man, document her upcoming gender-reassignment operation in Thailand, and follow her post-op as she acclimates to the newest chapter of her enigmatic journey.
The filmmakers have launched a kickstarter campaign to raise funds to complete the film. Think about donating.