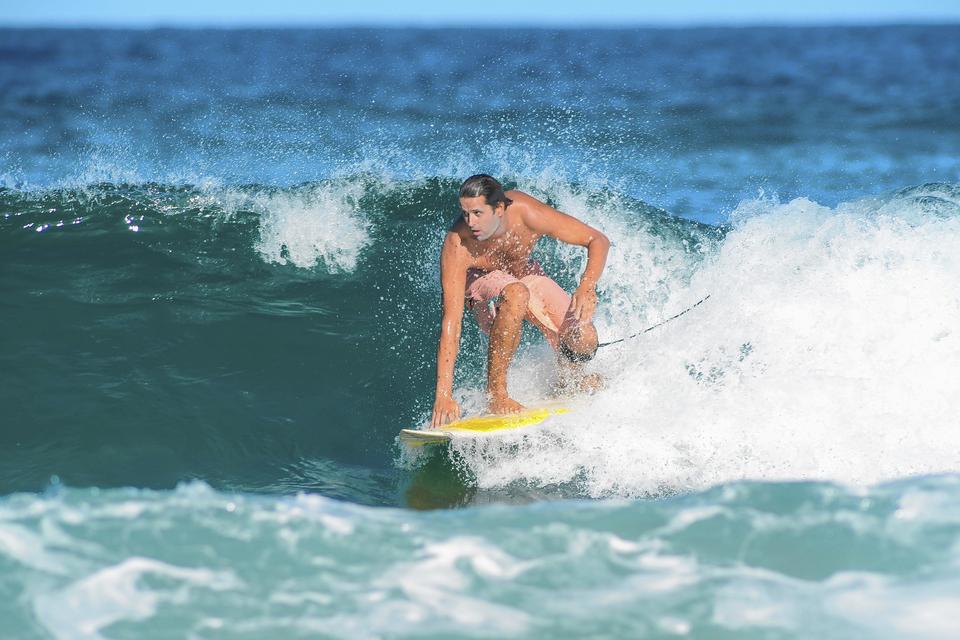 By Rhea Mahbubani @ the Daily Pilot
All it takes is one look at Thomas Castets for people to arrive at a conclusion — he must have a girlfriend.

The sun-kissed surfer is then forced to drop somewhat of a bomb on them.

“People just assume I’m straight,” Castets, 36, said. “So every time I meet someone I have to disappoint them by saying, ‘Actually, I’m not straight. I have a boyfriend.’ We need to make this less of a drama, less of a surprise and less of something that is rare.”

This shock factor is painfully evident among surfers, the Frenchman remarked. Some choose to remain in the closet for fear of being judged or isolated by their peers or dropped by sponsors. Still others, plagued by self-doubt, disassociate aspects of their lives so that those with whom they ride waves never learn about their sexuality.

A sport like tennis is more individualistic, noted Castets, a Sydney resident, whereas surfing involves a group of people who place a high value on respect, with each member taking a wave only when it’s their turn.

“Surfing, when it started in the ’60s and ’70s, used to be a source of freedom and showed people on the margin of society who didn’t want to get a job, lived on the beach and slept in their cars, and were openly different,” he said. “But over the years, it has been marketed and standardized into a stereotype in itself, where most surfers are blonde, white, heterosexual and mainly from Australia and California. If you fall outside the stereotype, you’re not regarded as a surfer.”

It was with this taboo issue in mind that Castets produced and starred in “OUT in the line-up,” screening at the Newport Beach Film Festival at 8 p.m. Wednesday. The title uses common surfing vernacular — “line-up” is the place in the sea where surfers wait for waves — while “out” refers to dropping the facade, as many dream of being able to do.

The 69-minute film, which will celebrate its North American premiere in Orange County, follows Castets and fellow Australian surfer David Wakefield as they travel to Hawaii, Mexico, the Galapagos Islands and parts of Southern California, visiting pockets of surfers of all ages and documenting their experiences.

The goal of the documentary isn’t to be negative or trigger a blame game, Castets stressed. Rather, “OUT in the line-up” attempts to uplift viewers and begin a conversation by exploring various perspectives on homosexuality and surfing.

Three-time world champion Cori Schumacher, who was born in Huntington Beach and now calls Carlsbad home, also makes an appearance along with her partner, Maria Cerda.

Born into a family of surf enthusiasts, Schumacher is hard-pressed to recall a time when the ocean didn’t enthrall her. But she was faced with a clear directive — her success as a surfer depended, she said, on being appealing to men and staying “really, explicitly straight.”

The 37-year-old realized early that she couldn’t advertise her sexuality or try to meet others who were gay, unless they connected through mutual friends. She even developed a catchphrase about male gay surfers being like “mythical creatures “or “unicorns” because they were simply not visible in what is projected as a testosterone-dominated sport.

According to Schumacher, the surfing culture distances itself from any suggestion of a homoerotic sport among men. In response, participants have tended to be overtly heterosexual, calling each other derogatory names for gays if they missed waves and objectifying female counterparts. It’s common, she remarked, to hear references to battle, warriors and even Sparta — the great military power of Greece — at tournaments hosted by the Assn. of Surfing Professionals.

“I think the conversation is really tied in around gay surfers and women — anything or anyone that challenges that status quo of these white, super masculine dudes,” said Schumacher, who walked away from surfing to get away from the focus on fitting in. “Their voices are silenced and they’re really pushed to the periphery of the main surfing bubble. ”

Janet Fink, a professor in the Mark H. McCormack Department of Sport Management at University of Massachusetts in Amherst, said studies have proved that companies are more likely to see financial success if tie their product to an athlete’s skill rather than sex appeal or personality. Despite citing Nike’s support of openly gay WNBA star Brittney Griner and Panasonic and Gatorade’s endorsement of two-time Olympic gold medalist and striker Abby Wambach as evidence of changing tides, she maintained that businesses err on the side of caution.

“By and large, corporations are more traditional in their values, so people who are running sporting goods companies are risk-averse,” she said. “They don’t want to embrace their gay players until someone else does and shows that it’s been successful.”

Fink says she senses a tremendous relief among athletes who have come out, explaining that not doing so had weighed heavily on their performance and relationships with teammates.

“Everyone that’s come out has said, ‘I just want to be a basketball or football or soccer player. I don’t want to have to worry about this huge burden that I put on myself because I’m afraid of what people will say or how they will react to me once I do come out,'” she said.

To Castets, being gay is part of who he is and surfing is one of his favorite activities — it’s that simple.

Schumacher echoed the sentiment. She believes that a film like “OUT in the line-up” can help to increase the visibility of gay surfers and protect them from bullying or exclusion.

“I think it’s really important to give a voice to the invisible,” she remarked. “I think any time you do that, you’re giving someone the strength to stand up and live a more authentic life, according to their own mode of being in the world instead of looking out trying to fit into what’s already there. If there are narratives or anything that upsets the status quo, I’m on board with that.”