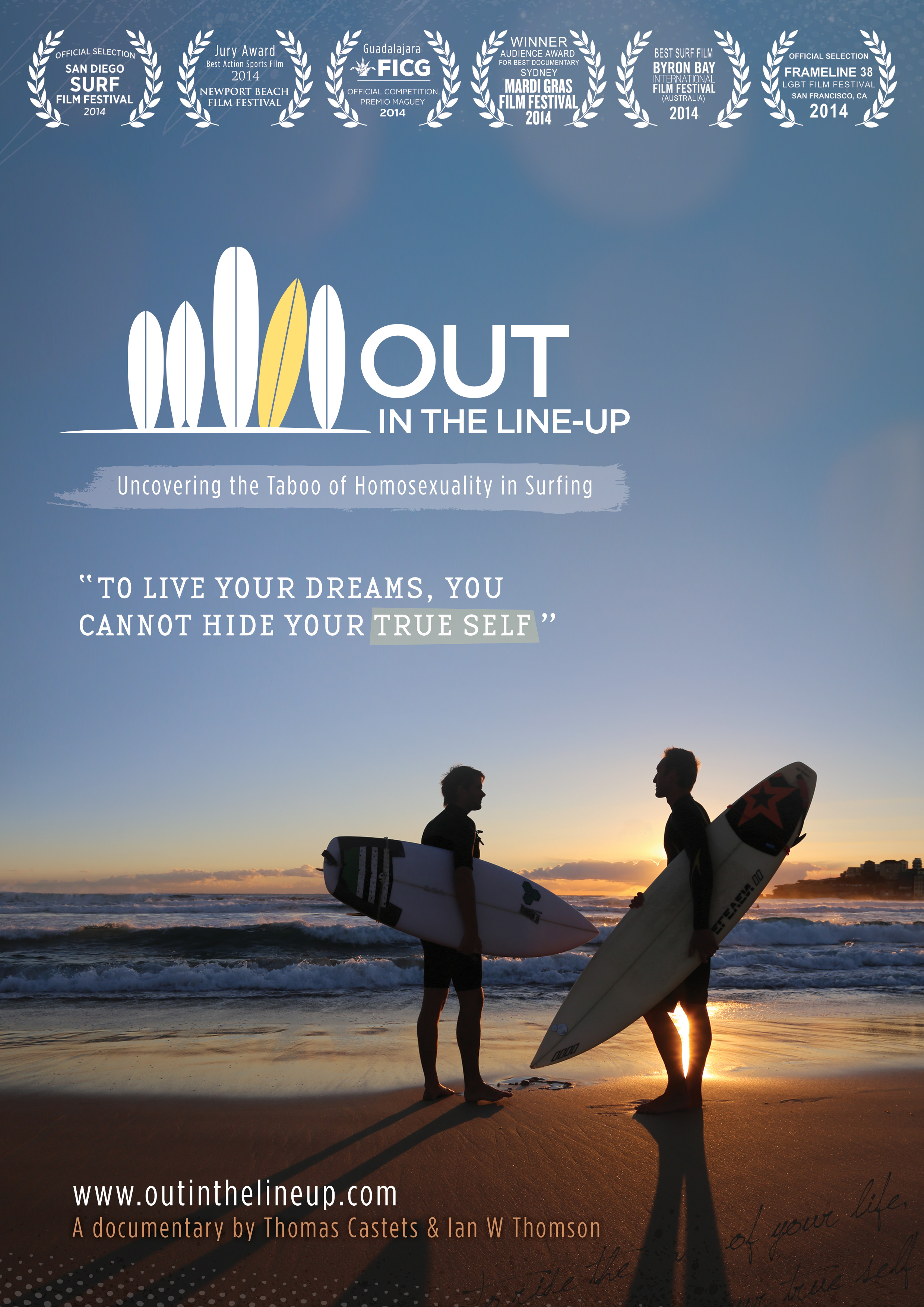 “OUT in the line-up”

While many sports are enjoying an awakening that gays can actually be accomplished athletes, there’s one sport that’s still deep in denial. Which is ironic since it’s the sport that’s celebrated for being free-spirited, rebelling against the status quo and filled with chill individuals. Surfing.

That may change with the new documentary “Out In The Line-Up” that follows the stories of gay surfers around the world. The film has already won awards at film festivals in Sydney, in Byron Bay (an Australian surf mecca) and at the American Premiere at the Newport Beach Film Festival (just miles from the headquarters of professional surfing and the huge surf / clothing / lifestyle brands), then moving to the San Diego Surf Film Festival on May 9 – and then events in Honolulu, LA, San Francisco, Toronto and many more to be announced. Current schedules can be found at http://outinthelineup.com/screenings/ along with information on how to buy DVD’s or watch on streaming movie channels.

The film begins when former Australian champion surfer David Wakefield feels ready to break 20 years of silence to reveal a secret that’s consumed him for years. He is gay.

At the same time, avid surfer Thomas Castets is using his digital skills to establish the first online community for gay surfers. David finds the site, registers and thus connects with Thomas, beginning a global adventure to understand why homosexuality is such a taboo subject in surfing.

Experiencing an emotion that so many other gay athletes share, David is amazed to connect with someone who understands the burden he has carried for so long. Thomas encourages David to confront his fears of rejection and march in the Sydney Mardi Gras parade, where he receives some unexpected media attention. Despite mixed reactions from friends and family, David is determined to find out why homosexuality is so hidden in surfing. He quits his job, packs up his house and joins Thomas on the journey to bring understanding to this taboo topic.

“OUT in the line-up” follows David and Thomas from the east coast of Australia to Hawaii, California, Mexico and the Galapagos Islands as they meet and surf with people from all corners of the surfing community. There’s some amazing stories, and beautiful surfing – contradicting a comment from a pro surf spectator that “gays just aren’t strong enough to paddle a surfboard”. There’s an openly gay three-time world champion, an award winning big wave rider, and former US Congressman and his surfer husband, along with everyday surfers, gay and straight coming together to help build acceptance. The story even inspired a current national champion surfer to come out and share his story – an amazing finale to the film.

Throughout their travels David and Thomas hear stories of fear, isolation and self-doubt, but are also inspired by tales of hope, self-empowerment and transformation. They witness the conflicts created by the marketing image of surfers (straight white males and women in tiny bikinis), and how it inhibits personal expression in a sport that’s supposed to be so free. Numerous attempts to get comments from the professional surfing associations, or the mega-corporations that sell billions of dollars of merchandise built on the surfing stereotypes were unsuccessful, as the film documents.

Why are homophobic slurs so common in the lineup? When homosexuality is now being accepted in pro sports including basketball, football and soccer – why is the surf industry unwilling to make any comment at all? How do gay surfers reconcile their identities as athletes when role models are invisible?

These topics and others are revealed as the journey of David and Thomas unfolds. They, along with the 5,000+ members of GaySurfers.net, their friends, families and communities hope this film can help create change in surf culture, looking to the surfing’s grassroots values of freedom of spirit, open-mindedness and love for the ocean.

We encourage you to check it out and help break down the barriers and build acceptance for everyone, in every sport! Screening information, or links to buy DVD’s or watch the movie online at www.OutInTheLineup.com