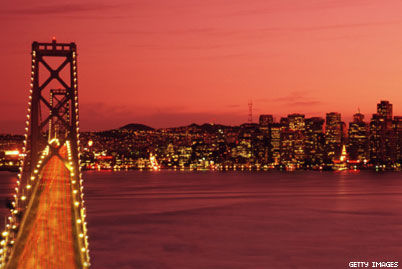 From the crunchy granola coastline of Northern California to the star-studded Riviera towns of Southern California, the time-honored way to spy the Pacific dramatically kissing the West Coast is via road trip down California State Route 1, better known as the Pacific Coast Highway. With the California coast’s rolling hills cascading above seal-lined beaches, lush vineyards, sexy surfer enclaves, and artist villages, it could take a lifetime to explore one of America’s most famous sun-drenched drives.

From the crunchy granola coastline of Northern California to the star-studded Riviera towns of Southern California, the time-honored way to spy the Pacific dramatically kissing the West Coast is via road trip down California State Route 1, better known as the Pacific Coast Highway. With the California coast’s rolling hills cascading above seal-lined beaches, lush vineyards, sexy surfer enclaves, and artist villages, it could take a lifetime to explore one of America’s most famous sun-drenched drives.

1. SAN GREGORIO
Despite the frequent fog and bone-chilling waters, the coastline between San Francisco and Santa Cruz is riddled with gay-popular nudist beaches. By far the best is San Gregorio Beach, a half-hour’s gorgeous drive down the Pacific Coast Highway from San Francisco. Between mileposts 18 and 19 you’ll find the entrance to a dirt parking lot run by a gay couple who oversee the expansive cliff-lined sands of the country’s oldest nude beach (since 1967). Driftwood structures make for natural sunbathing fortresses. Call the adjoining San Gregorio State Park (650-879-270) for weather conditions.

2. SANTA CRUZ
This quintessential Californian college surf town is not only home to the one-of-a-kind Santa Cruz Surfing Museum(831-420-6289), but it also harbors another rarity: a gay surf group, the Rainbow Surfers (831-425-6562), whose members welcome visitors to join their casual surfin’ safaris. The town’s gay-owned Vino Cruz wine shop (831-426-8466) specializes in over 150 wines all made within the Santa Cruz Mountains, an area that is quickly making its mark. Swing by the cool, modern, glassed-in store in the historic downtown for tastings.

3. MONTEREY BAY
The small Latino farm town of Castroville is famous not only for being the self-proclaimed “artichoke center of the world” but also because it crowned the then-unknown Marilyn Monroe as Artichoke Queen in 1947. In Monroe’s honor, the very local Franco’s Norma Jean Club (831-633-2090) hosts Saturday-night Latino drag performers on its velvet-curtained cabaret stage amid posters of Marilyn.

4. CARMEL-BY-THE-SEA
This millionaire’s village (Doris Day lives nearby, and Clint Eastwood was once the mayor) is a walkable hamlet overflowing with quaint if pricey cottages and more upscale art galleries than you can shake a credit card at. Works by iconic queer Big Sur artist Emile Norman, famous for his intricate wood sculptures, can be found at Carmel’s oldest gallery, the Carmel Art Association (831-624-6176).

5. BIG SUR
This mystical region where steep mountains plunge into the Pacific has long served as a refuge for artists in their quest for divine inspiration. Seek sanctuary at the gay-owned Eagle’s Nest guesthouse (831-667-2587), perched high on a mountain, with a sunbathing veranda that takes in colossal ocean views and an interior with exquisite Asian furnishings. In Jack Kerouac’s Big Sur, he notes of a visit to the local hot springs: “A gang of fairies there naked all standing around in various bathhouse postures that make me hesitate to take my clothes off just on general principles.” These spring-fed pools are still nude but now luxuriously renovated by the Esalen Institute (831-667-3000), which allows the public nighttime access to the private springs. Be consumed by the stars above as waves crash below your cliffside perch.

6. SAN SIMEON
The world-famous Hearst Castle (800-444-4445) is the monumental hillside retreat built by media mogul William Randolph Hearst over the course of almost 30 years to house his monolithic art collections and host celebrity guests (bisexual actor Errol Flynn was supposedly kicked out for breaking Hearst’s house rules against excessive alcohol consumption and unmarried guests sharing a bed). The castle’s genius architect, Julia Morgan, designed some 800 buildings during her lifetime and was believed to be lesbian.

7. SAN LUIS OBISPO
Do gay dude ranches really exist? Well, it may not have horses, but Temptation Ranch (888-213-7733), a gay men’s retreat with clothing-optional swimming nestled in a private, golden, oak-filled valley, comes darn close to queer cowboy paradise. Tasteful cabins and a well-appointed ranch house rental — not to mention a gym, lake, and Jacuzzi — make this one of the best-kept gay travel secrets in California.

8. SANTA BARBARA
One of California’s most stunning and wealthiest towns (and that’s saying something), Santa Barbara is a Mediterranean-style gem known for its innovative restaurant scene. Two lesbian-run local fixtures especially stand out: Shalboob’s (805-963-0378) has been serving fresh fish and steaks in casual elegance since 1987, and Sojourner Café (805-965-7922), Santa Barbara’s original coffeehouse in 1978, dishes up an eclectic menu of gourmet international cuisine.

9. MALIBU
Following the recent renovation of its famous pier, Malibu is further gussying herself up — thanks to gay Hollywood icon David Geffen — with the only luxury oceanfront hotel between Santa Monica and Santa Barbara. The Malibu Beach Inn (310-456-6444) reopened in 2007 after a plush multimillion-dollar refurbishment. It occupies a plumb spot on the exclusive “Billionaire’s Beach,” with glassed-in balconies, premier artwork, and a European-trained staff.

10. SANTA MONICA
Will Rogers State Beach (310-305-9503) is better known to many L.A. gays as “Ginger Rogers Beach,” since this three-quarter-mile stretch of sand and mountain views has remained gay-popular since the ’50s. Along the adjoining West Channel Road there was once a full gayborhood anchored by the Friendship bar, which closed in 2005 after a 68-year run as a watering hole made famous by queer patron-author Christopher Isherwood, who lived in the canyon above. FROM THE SUMMER 2008 ISSUE OF THE OUT TRAVELER