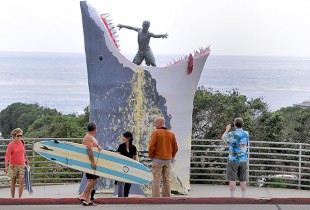 Despite a groundswell of public support for leaving it alone, the “shark” that mysteriously encased the official surfer sculpture at Cardiff-by-the-Sea is set to be removed Tuesday by city workers, officials said.

The shark was put in place under cover of darkness Saturday, appearing to eat the “Magic Carpet Ride” sculpture along South Coast Highway in this seaside community in northern San Diego County.

The sculpture, installed three years ago, has been derided as unsurfer-like by locals who call it the “Cardiff Kook.”

But Howard Whitlock, assistant superintendent of public works, said it will be removed to avoid any liability for the city. The parts will be hauled to a city facility “in case anyone wants to claim them,” Whitlock said.

Removing it will require about four workers at a cost of $300 to $400 in labor and equipment, Whitlock said.

“It will be much easier to remove than it must have been to install,” he said.

The surfer sculpture does not appear to have been damaged by the shark, Whitlock said. With its pedestal, the sculpture rises 16 feet.

Photo: Surfer Don Frank, second from left, and others take a look at the “Magic Carpet Ride” sculpture surrounded by a sculpture of a shark, in Cardiff-by-the-Sea. Credit: John Koster / The North County Times