From inception, we at Outerknown have focused on doing things differently. The meaning of our mission is in our name – ‘the furthest reaches of what we understand today.’ With this in mind, we intend to bring stories forward that not only capture the spirit of our culture, but also open up our minds to new ideas, people, and projects with the hopes of inspiring our community and challenging our perceptions of controversial topics.

In our brief history, we’ve covered a diverse set of stories such as our sustainable supply chain, global travel, photographers we admire, and an architect named Harry Gesner. Today, we tackle a story about discrimination. Closed-mindedness has plagued our society throughout history, and the shifting tides in our governments and communities toward sexual orientation has been a great step forward over the last few decades. However, knowing that discrimination still exists in our surfing community that was founded on freedom, the aloha spirit, and an innate connection to nature, reminds us that we still have a long way to go. Our hope with this story is to introduce you to a friend of ours, and his work on a film called ‘Out in the Lineup‘. You don’t have to watch the film, but if you do you might want to consider sharing this with others in the hopes of uprooting outdated stereotypes. We have often said that our goal is to inspire change and this should happen inside, and outside, of our brand.

A regular in the Venice line-up, Glen Walsh is steadfast in returning the surfing movement to one that embraces individuality and a strong sense of community. When you walk down Washington Blvd with him, you’ll pass by countless people that know him by his first name and tune in to his daily social media posts giving many locals their first look at the surf conditions out front in Venice. He constantly radiates positive energy throughout our local community of surfers, and I guess this is what this story is all about. It doesn’t matter how good you surf, what board you ride, or who you love… it’s all about fun!

Jamie Brisick: I really enjoyed the ‘Out in the Line-up‘, Glen. It’s a great achievement, and a breakthrough in the surf world.

Glen Walsh: I’m glad you dug it. It was a real labor of love for me. To find and license 38 tracks for a film—it was not easy! But we did it. We had support from great people. Like Sal Masakela. That Alekasam track that we used in the opening credits—that was his. That really sets the tone of the film musically, so I was really proud of that.

“A lot of straight people watch this film and say, ‘Wow, I had no idea it was like this. I always thought the surfing world was really free spirited. But it’s actually really not.’ So I think the film is opening minds and opening hearts.” – Glen Walsh

JB: The surf world I came to in the late ‘70s was a sort of haven for misfits and renegades, and then it became more commercialized and professionalized. Today it’s really quite narrow-minded, there’s a sort of right-wing quality to surfing.

GW: Yeah, and the political correctness of surf culture, everyone has to be on the right side of everything—I think that’s kind of killed the spirit of surfing, and it’s whole rebellious nature. You know, being allowed to be who you are seems only natural in the surf world, but it’s not natural, and it’s really quite frowned upon. The hope for the film is that it will open minds. There’s a strong message of equality and acceptance. We’re not looking to be “tolerated.” No one wants to be “tolerated.”

JB: “Tolerance” is an interesting word. People toss it around unthinkingly. They have no idea how loaded it is, how demeaning.

GW: I love the way that guy breaks it down in the film: “Who would want to be tolerated?”

JB: What has been the end result of having this film out in the world?

GW: Well, the gay surfers website, gaysurfers.net, went from having 2,000 members to almost 6,000, so it’s definitely built community. Our Facebook page for Out in the Line-up went from having 100 likes to almost 2,000. And the film is continuing to screen—at surf film festivals, and gay and lesbian film festivals. A lot of straight people watch this film and say, “Wow, I had no idea it was like this. I always thought the surfing world was really free spirited. But it’s actually really not.” So I think the film is opening minds and opening hearts. Now it’s on Netflix and iTunes and that’s generating a lot of interest. It’s building community. This is all we’ve ever wanted. I’ve met so many cool people through the film, gay and straight, and no one seems to care. 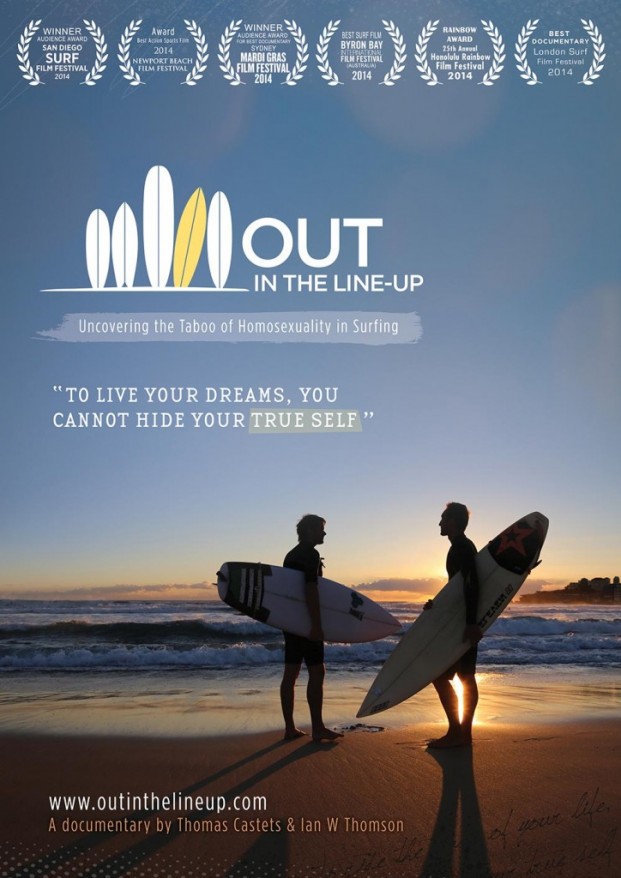 “It’s building community. This is all we’ve ever wanted. I’ve met so many cool people through the film, gay and straight…” – Glen Walsh 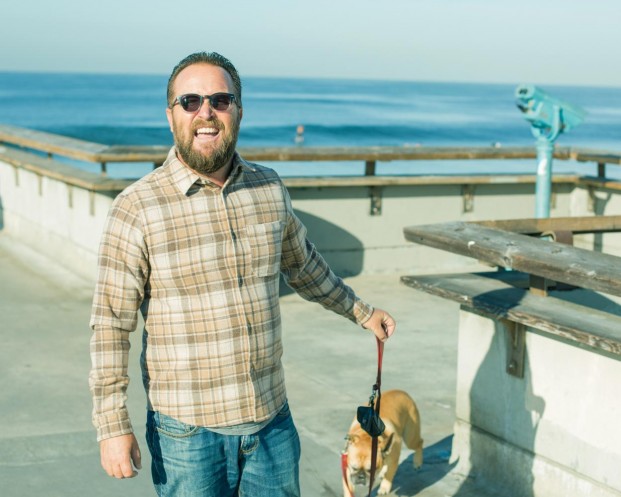 We all talk about dating issues, work stuff, politics, art. And that’s what I like about the new kind of soulful surfing movement that’s more anti-corporate, more free-spirited. I think there’s more of a return to that in the surf community. Big companies are shunned; surfers want their individuality back. People don’t want to wear the mainstream surf labels. And that’s where I feel like I fit in, ‘cause I really don’t like to wear that stuff, and wear those labels, ‘cause I just don’t want to be a billboard for a company that doesn’t support me as a person. And that’s why I love what Outerknown is doing, and how they are reaching out to all kinds of people, including me!, and finding out what our stories are, because we all have this common love of surfing, and we all have such diverse backgrounds, and I think that’s really what the fabric of surfing is, and what it means to all of us.

JB: Well I hope the film keeps getting out there—I think it’s important.

GW: I do too. Thanks. It keeps getting invited into the festivals. People joke with me about making an Out in the Line-up 2!

Jamie Brisick is a writer, photographer, and director. He surfed on the ASP world tour from 1986 to 1991. He has since documented surf culture extensively. His books include Becoming Westerly: Surf Champion Peter Drouyn’s Transformation into Westerly Windina, Roman & Williams: Things We Made, We Approach Our Martinis With Such High Expectations, Have Board, Will Travel: The Definitive History of Surf, Skate, and Snow, and The Eighties at Echo Beach. His writings and photographs have appeared in The Surfer’s Journal, The New York Times, and The Guardian. He was the editor of Surfing magazine from 1998-2000, and is presently the global editor of Huck. In 2008 he was awarded a Fulbright Fellowship. He lives in Los Angeles. For more of his work check out jamiebrisick.com & @jamiebrisick

“The political correctness of surf culture, everyone has to be on the right side of everything—I think that’s kind of killed the spirit of surfing, and it’s whole rebellious nature.” – Glen Walsh