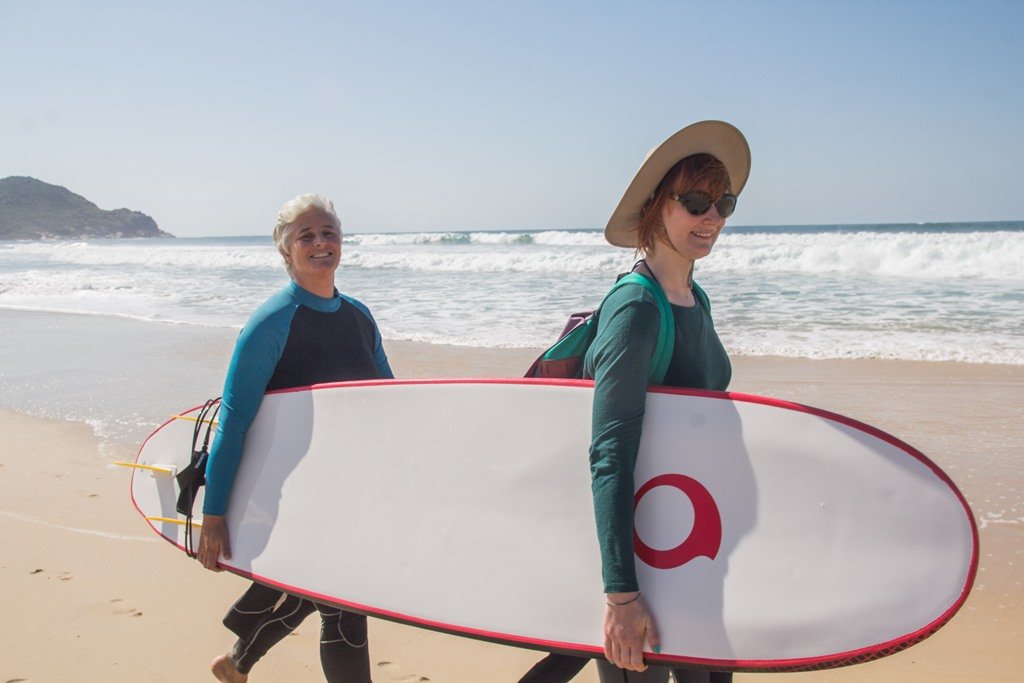 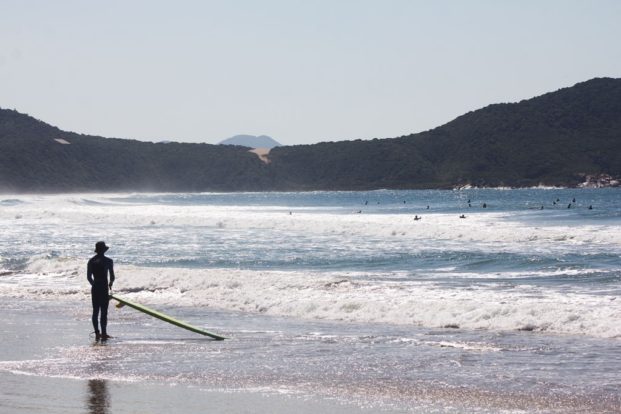 This week, a group of surfers will hit the beach in Florianópolis, Brazil, for what’s known amongst participants as “gay surf camp.” This year’s retreat may be the most important yet—and the reason has little to do with the swells. “Now that we’re facing huge setbacks in LGBT rights both here in Brazil and in the U.S.A., I think events like ours will be even more relevant and important to our community,” says Marta Dalla Chiesa, a South Brazil native. With her partner Lesley Cushing, Dalla Chiesa co-owns Brazil Ecojourneys, a week-long experience for people of all genders and skill levels in a welcoming and diverse atmosphere. “Demonstrations and protests are important,” she says, “but being good to yourself and finding community can also be a powerful form of activism.”

Brazil Ecojourneys did not begin as an LGBTQ travel company. The pair were less interested in sharing what the southeast coast of Brazil had to offer: colonial history, abundant seafood, unusual wildlife, and, of course, surfing. That changed when Thomas Castets of gaysurfers.net, the LGBTQ surfing community site, contacted them. In shooting the gay surf documentary, Out in the Line-up, Castets wanted to secure some interviews in Brazil. “We were impressed with the diversity of things (Brazil Ecojourneys) offered,” he says, “and, of course, the surfing opportunities.” Dalla Chiesa and Cushing saw the importance of the project and, after some strategic planning, Brazil Ecojourneys hosted their first Gay Surf Brazil retreat in October 2013, and Out in the Line-up was released the following February. “Surf is a very nonstereotypical sport for gays,” Dalla Chiesa explains. “Even I was surprised that a social website with thousands of gay surfers existed. We knew we wanted to get involved.” 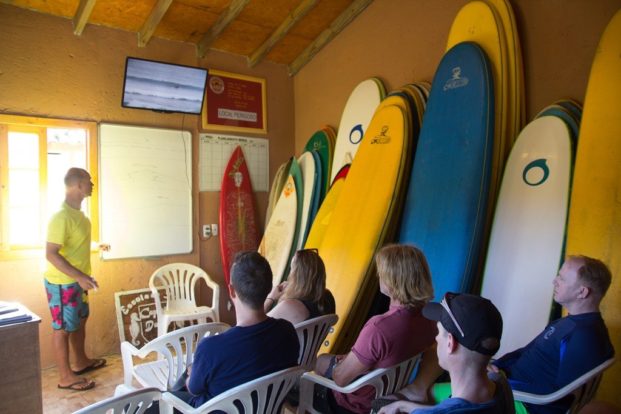 I came to athletics late in life, and it was soccer—a categorically land-based sport—that lured me away from my desk and onto the pitch. I’ll admit it: when first invited to a Gay Surf Brazil retreat, I balked. Motorcycling was the closest thing to surfing I’d ever done, and that’s not very close at all. Also, there was the issue of beachwear. Like pretty much every other masculine-of-center queer woman I know, I suffer a full-blown gender breakdown in the swimsuit aisle. However, I try to say ‘yes’ to adventure, and besides, surfers of all genders wear wetsuits, so last year I traveled to Florianópolis with a half a dozen other would-be surfers.

Caitlin Gulliford, 30, is a software developer from Florida who splits her time between the United Kingdom and the United States. She came to the retreat with only one teenage surfing experience under her belt. “I was embarrassed as some local guys from my high school were there and they laughed a lot at us trying and failing,” she said. For her, fitting in to the “bro” culture of the sport was stressful enough to keep her out of the waves into adulthood, but she also had reservations about the retreat itself. “I guess that going into it I was also nervous that, not only was I not a surfer, but also not entirely queer enough to fit in.”

Gay Surf Brazil is explicitly queer, but in the estimation of its hosts, that includes allies. To Dalla Chiesa and Cushing, the goal is inclusion, and they work to attain a gender balance. “Our aim is to be a camp the welcomes all of the community, but if we have an overwhelming majority of men, women might not feel so welcome,” say Dalla Chiesa. “I believe a mixed group is more relaxed and friendly to all.” The same goes for the staff. “As in any of our tours, we source partners that are welcoming, and we make sure the surf school has at least one female instructor, which is not very common here.” 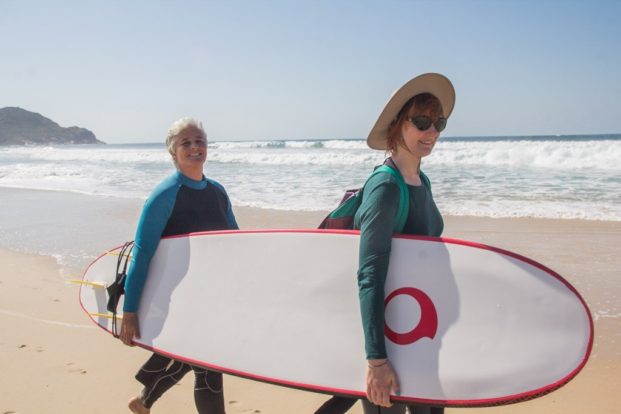 The opening days of the retreat were spent acclimatizing in airy bungalows across from the sugar sands of Praia Mole in Florianópolis, the notably gay-friendly capitol of Santa Catarina state. We were an international crew with novices and a few returning surfers. Included in the latter group was a 40-year old Argentinian lawyer who, each year since 2014, has loaded his surfboards into his truck and made the drive north. Gabriel, who prefers to give only his first name, loves to surf, but hasn’t always felt comfortable being out. “For me, it’s really nice to participate because you’re on safe ground,” he says. “You can be open about being gay, and the straight people there are somehow related to someone LGBT or they are gay-friendly, so that’s cool. At non-gay surf camps, that’s not always the case. Some people may not feel comfortable around gay people—whether they disclose it or not.”

In Argentina, Brazil, and other places around the world, the LGBTQ rights movement is still fledgling and the stakes for being out remain high. With Brexit in the United Kingdom followed by Trump’s election in the United States, the political landscapes of two comparatively progressive regions seems to be shifting—a phenomenon Gulliford has witnessed firsthand. “It has definitely been a trying year for me,” she says. “I found the U.S. election particularly hard, given the misogynistic and homophobic rhetoric. I’m a survivor of workplace sexual assault and have struggled with feeling comfortable in my body since I was attacked. It felt like it was destroying what little ground I had to heal myself.” For her, the surf retreat was an unexpected antidote. “I realized that I am in control of my body—not the board, not the ocean, and not anyone else,” she says. “So while surfing is quite chaotic, it made me feel whole and comfortable in myself, the most comfortable since I was assaulted.”

For Gabriel, it’s all about community. “Meeting others with your same hobbies and likes makes you feel good and accompanied, like you’re not the only gay who likes a certain thing,” he says, hinting also at his own challenges with being out. “It’s easier to be more visible when you are with your group.” 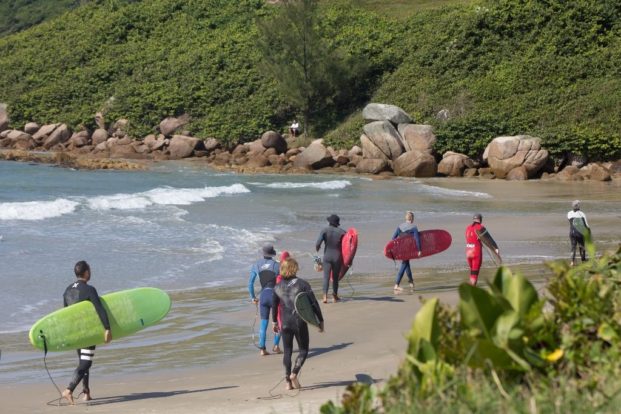 I didn’t end up being very good at surfing and I found wearing a wet suit about as comfortable as being publicly naked, yet somehow my Gay Surf Brazil experience left me with the same feelings as my new friends. In 2003, professional surfer Bethany Hamilton lost her left arm in a shark attack. It didn’t stop her—she returned to the sport and continued to win. “My passion for surfing was more than my fear of sharks,” she told reporters. That analogy works for what it’s like to be queer in the world these days, but maybe not as resonant for me as this comment from the inimitable Audre Lorde: “Caring for myself is not self-indulgence, it is self-preservation, and that is an act of political warfare.”