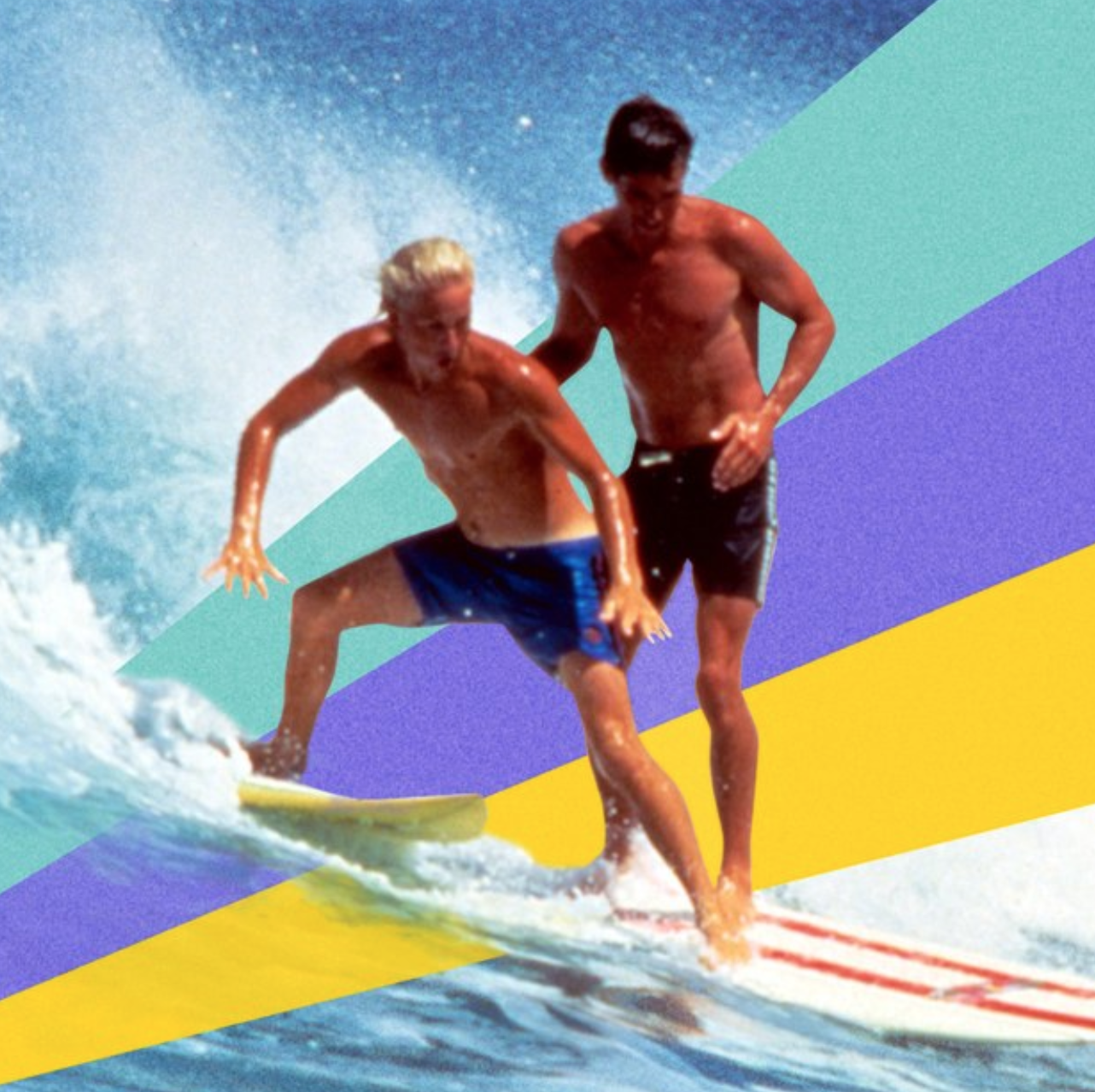 For many queer people, it’s hard to find spaces where we feel like we can thrive and be ourselves. Many of us find pride in nightlife; others meet fellow LGBTQ people through gay sports leagues, an opportunity to find chosen family while playing kickball or water polo. So the recently blossoming cottage industry of gay surf communities marks another, much-needed space that allows queer people to be their authentic selves—while also getting trained in a sport they might have long been interested in but never felt like they could be a part of.

It’s still early days for the LGBTQ surf world, but visible communities of queer surfers have begun to bubble up in recent years, spaces welcoming everyone from longtime thrill-seekers who’ve felt the need to keep their sexuality under wraps to those seeking the joy of riding a wave for the first time in their lives.

South Brazil native Marta Dalla Chiesa is just one advocate spearheading this changing current. She and her partner Lesley Cushing co-own Brazil Ecojourneys, a tour operator based out of Florianopolis dedicated to sustainable tourism. One of their most buzzed-about packages is called, simply, Gay Surf Brazil; it’s a weeklong retreat that connects LGBTQ+ people interested in surfing while also helping to fight homophobia in surfing by simply existing within the space. It was started in 2013, originally in partnership with Thomas Castets, the founder of the social network GaySurfers.net and producer of Out in the Line-up, a documentary about what it’s like to be gay in the world of surfing.

“I had never realized the extent of homophobia in surfing,” Dalla Chiesa says “I always had the impression surfers are so chill, that they wouldn’t be bothered about this. When Thomas called me and talked about his film, you see how homophobic [things can be], especially at the professional level. In the States or Australia, I think the homophobia is there even if it’s subdued.”

Out in the Line-up offers a sweeping overview of the challenges that gay surfers around the world have faced, including finding kinship with people like themselves—a common struggle in the LGBTQ community—and a lack of sponsorships as out gay surfers at the professional level. In a 2014 interview with The Guardian, Castets explained surfing’s deep-rooted homophobia in more depth.

“Surfing is, unfortunately, primarily a male-dominated sport. And when you have all these men traveling together, hunting for waves, there is an element to the psychology that is about making sure there is no ambiguity between the men,” he said. “To prove your heterosexuality, you need to prove your skills in the water. There have never really been any gay surfers out there, so I would just call that ignorance and a lack of visibility.”

Pop culture has certainly helped perpetuate the mass ideas about what a “typical” surfer is supposed to look like. The Endless Summer might be from the ‘60s, but it’s still one of the most iconic surfer films around, featuring two tanned, ripped bros carrying around surfboards in search of the perfect wave. Marketing for popular surfer brands also continue to be heteronormative, reinforcing archaic gender roles—Billabong landed in hot water back in 2017 for an ad that many called sexist because while it showed a male surfer shredding waves, the female was featured posing sensually on the beach in a bikini with no surfboard in sight.

Over the past few years hosting Gay Surf Brazil, Dalla Chiesa has heard stories from people who didn’t feel comfortable diving into the sport because of its “macho culture.” Things like “I always wanted to surf, but I didn’t have the courage because I’m a bit effeminate” or “I would feel bad surfing around macho surfers that might look at me funny,” she says. One year, she met a young man from Rio who’d grown up by the sea but didn’t feel comfortable enough to try surfing until he was with a school of other queer people who supported him. This reassuring environment has proved to be vital in not only everyone’s experience throughout the week, but also having people come back for another go.

Dalla Chiesa says participants return year after year thanks to the connections they’ve created through surfing together, especially for those whose first time was through her trips. Attendees who have met through the program have even started planning their own trips together; Dalla Chiesa has gone on to surf with clients all over the world.

For her, she says, it’s about community, a chosen family of queer surfers who know they’ll find like-minded support in each other, perhaps for the first time in their lives. “If you are [out] there on your own, it’s harder than if you are in a group,” she says about learning to surf. “People that are doing it for the first time, from every step they do to the first wave, people as a group really encourage them and we cheer. So people feel really included and that, I think, forms a bond,” she says. “We have a sense of community. There is more than surfing that’s linking us. Our queerness is linking everybody.”

In the United Kingdom, London-based actor Mattie Stewart and his friend Kris Cieslak have been planning trips they’ve dubbed Gay Surf Week for the past three years. Stewart only started surfing three years ago while on a trip to Fuerteventura in Spain’s Canary Islands and fell in love with the sport, so he and Cieslak decided to turn it into a hashtag (#GaySurfWeek) and a yearly travel destination. The first year, there were six people; it grew to 12 the following year, and then 18 this past year—cottage, sure, but expanding and opening new doors as it does. Stewart grew up extremely religious in Poland and was even studying to become a priest before coming out. Now, organizing Gay Surf Week has become a retreat of sorts, giving him the opportunity to find camaraderie with other gay surfers.

“For me, surfing and seeing that everyone else is proud of my achievement is such a big thing,” he says. “The biggest achievement for us [this past year] was when it was eight of us standing [on our boards at] the same time. The moment is priceless … It’s better to surf together than surf by yourself.”

Surfing has provided some life lessons for Stewart, he says, who sees parallels between riding a wave and overcoming hardships. While standing on your board, for instance, you have to keep your head straight and eyes locked on the shore or you risk falling, an apt metaphor for staying focused on your goals. And of course, there’s the occasional wipe out, a reminder that sometimes shit just knocks you off your feet.

But Dalla Chiesa mentions some hurdles in continuing what she’s helped create, including the current political climate in Brazil. While same-sex marriage is legal and Brazil’s Supreme Court voted in favor of making homophobia and transphobia crimes, violence against LGBTQ people continues. In 2018, 420 LGBT people were killed across Brazil according to the rights group the Grupo Gay da Bahia. Additionally, Jair Bolsonaro, the country’s current far-right president and a self-declared homophobe said earlier this year that “we can’t let this place become known as a gay tourism paradise. Brazil can’t be a country of the gay world, of gay tourism. We have families.” (Bolsonaro is also infamously known for having said he would rather have a dead son than a gay son.)

Due largely to the political situation in Brazil at the moment and some cancellations, Gay Surf Brazil has had to put plans for this year’s festivities on hold. But since they know they have a committed community looking forward to reuniting, Dalla Chiesa has started looking into possibly organizing the trip elsewhere (Mexico, Portugal, and an as-yet determined European country are all on her short list).