The Day I Decided to Paddle ‘OUT’! 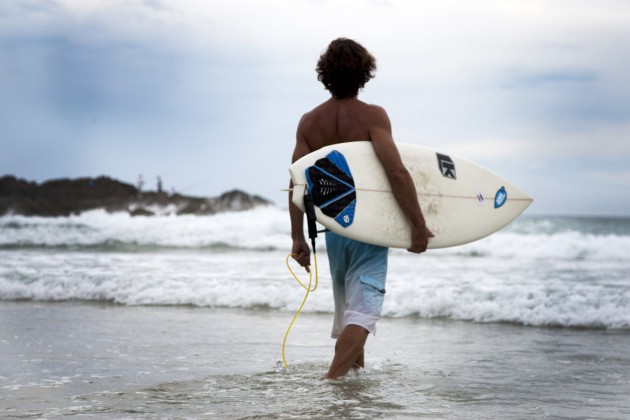 Walking with my surfboard through the streets of Sydney towards that gathering crowd was a powerful experience. I was fuelled on by Joel Burn’s city council speech to gay youth ‘It gets better’. I was ready to stand for gay youth and promote acceptance. As a surfer, I was ready to stand against what I feel is the narrowing of surf culture by industry as they stereotype surfers to sell products, misrepresenting the diversity which exists in surfing.
I’d decided it was time to paddle out!

I was heading towards the meeting area for participants in this year’s 2011 Sydney Gay and Lesbian Mardi Gras to meet up with other members from a group called GaySurfers.net. By this stage, of what felt like a really long day (it was only 3pm), I was beginning to feel out of place and like a lamb being led to the slaughter. The surfing world was about to be introduced to gay surfers and no doubt many hardcore surfers would respond with intense reactions. It’s to be expected when you’re broadening the definition of an Australian icon. About to stand publicly for what I believe in, I had no idea of what the consequences might be. It was a Saturday afternoon, I should be in the surf at Byron, but instead I’m in the CBD with my board under my arm.

Reaching the edge of the animated and mostly glittering mass of people, the question, which during the past week had almost worn me out, raised its annoying head, ‘Why are you doing this?’ The more the noise of the crowd increased, the louder my responding mantra thundered back, ‘what will be, will be!’

As I reached the War Memorial in Hyde Park, the most colourful and diverse crowd I’d ever seen engulfed me. There were beautiful Thai girls (I think they were girls) elaborately dressed in ceremonial costume, young guys formally dressed, one side of their bodies as a man, complete with dinner suit and top hat, the other side as a women, classically adorned with coiffed hair, evening dress and high heels. There were fit, tanned lifesavers, fluffy white angels (a lot of these), some very hairy men and big bossomed women, and so much more. The crowd varied between being theatrically dressed, to half dressed, to the ‘please get dressed’, and finding myself amongst it all I couldn’t stop my spine from tingling or wipe the smile off my face; the mass sense of anticipation I was breathing in made me feel bolder and more open to humanity.

It surprised me that I felt so comfortable amongst such a variety of people. Each time I felt ‘weirded’ by someone I didn’t understand, I challenged myself with the question ‘Do I really believe in diversity and acceptance for all people?’ The church I go to prays members toward ‘unity in diversity’.  My smile was held by years of these prayers.

Deciding to tell someone you’re gay is a very powerful experience. Here I was, about to tell a crowd of 30,000 ecstatic, celebrating and supportive people my most private and personally puzzling information; I’m a surfer who is gay. The atmosphere and energy around me made it all seem so easy.

As I joined the other surfers I would be marching with it really felt like we were about to doing something incredibly significant, all for different reasons and resulting in different implications for each of our lives. There were two issues at hand: our personal recognition to the public that we are gay, and that we are part of a global group of surfers marching for the first time to represent the diversity which exists in both surfing and the gay world.

Entering the parade route, I was astounded by the applause, the acceptance and the tranquillity of joyous celebration around me. I also felt incredibly proud. I was proud of this great, supportive crowd, just as I was proud of the people who, for a huge variety of reasons, marched as part of a gay collective. Personally, I felt amazed that I’d arrived at this moment.

Led by members holding the GaySurfers.net banner and followed by a 4 wheel drive laden with surfboards and showcasing the G-board (a board shaped and spray painted with the community logo), I was one of 25 guys and girls who walked, danced and grooved along the parade route to a slick mix of iconic surf tunes. When the song ‘Wipeout’ blasted out from the PA, each member’s surfboard was raised into the air in formation to spell out ‘GAYSURFERS.NET. Always at this point the crowd would go wild.

Finding myself near the front of the group, I was suddenly met by a gay icon with microphone and TV camera who’d obviously decided that 30,000 people wasn’t enough for me tonight for such important information sharing and that the rest of the world should also be informed. I was now peering into the lens of a television camera and a global audience.

Almost laughing out loud at the irony of my ‘I’ll just march quietly in the middle of the group tonight’ plan, I found myself strolling up the road with my arm around a woman named Pam Anne, chatting as if I’d known her all my life. ‘I’m from Byron Bay. I’m part of GaySurfers.net, a global community of surfers with 3,000 members from 80 countries…we surf together….’ To millions of TV viewers around the world, and even more confounding to me, to the readers of smh.com who published my photo the next morning, I was now, ‘Out’! Really, really ‘Out’!

The next morning at 6am, the phone began beeping and ringing. Friends and family were responding to my photo and my interview, which had found its way to YouTube. I felt oddly silent and very anxious. I reasoned that the best thing was to let them talk. My response to people was simply to stop and listen. I listened for how my world would respond. What I began hearing, time and time again, was support, love, connection, some shock, much relief and pride. What I’d participated in the night before had created a strange sense of honesty. Not so much my honesty, but other peoples. It seemed ok for everybody to say how they felt, to speak of love and confusion, and begin piecing ‘me’ together. I was now, to many people, a slightly different version of me.

So, what can I tell you about coming out?
Some people may feel disappointed that you’re gay, others may feel angry with you, others may suddenly fear for your health and lifestyle choices. However, from my experience, most will celebrate with you for being comfortable enough to acknowledge what to you, is your own truth. For me, I waited until I had a reason to come out…I marched to show the surfing world that diversity exists in surfing and I believe that future young professional surfers who are gay should feel they can participate freely and unhindered on the ASP tour, or just be a surfer in general. I also marched as part of the broadening image of what it is to be gay.

Not all gay people are alike and there is no one image of gay that should be encouraged over another. I like what Clifton Evers said in his book Notes for a Young Surfer regarding the stereotyping and labelling of gay, ‘Try adding up how much time you actually have sex; it doesn’t take up enough of your life to be the measure used to define you.’ I reason that our true self is realised when we are working towards becoming the best we can be in all areas of our life.

So there it is! My personal is now public. I decided to march rather than speak, and ended up doing both in front of many. While I may not speak much in the future about that which is personal and private to me, I am proud of how and why I came out. At times, my thought processes were overwhelming, and rightly so; this is a big deal for a gay person. I felt no need to rush. I wanted to do it in a way that was right for me. The struggle and the decision-making was worth it…I am now who I am…a son, a brother, an uncle, a colleague, a friend, and a surfer, who just so happens to be gay…oh, and I now paddle out! 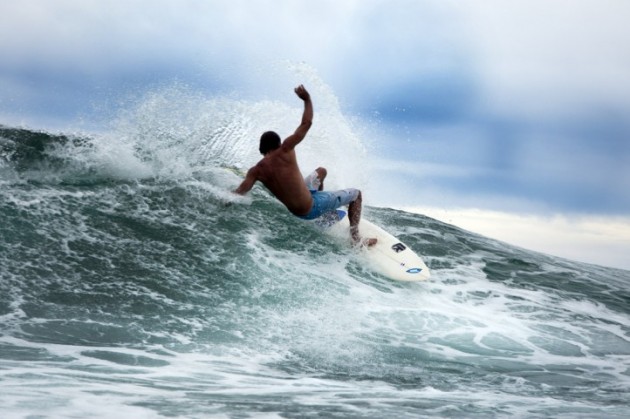 7 responses to The Day I Decided to Paddle ‘OUT’!

Airbnb Experience : surf lesson with OUT surfer Glen Walsh
A Surfer's Guide to Keeping Fit
Gay Stereotypes and Gay Surfers
Gay Surfers documentary
You don’t need to be a girl (The story of a transsexual shaper)