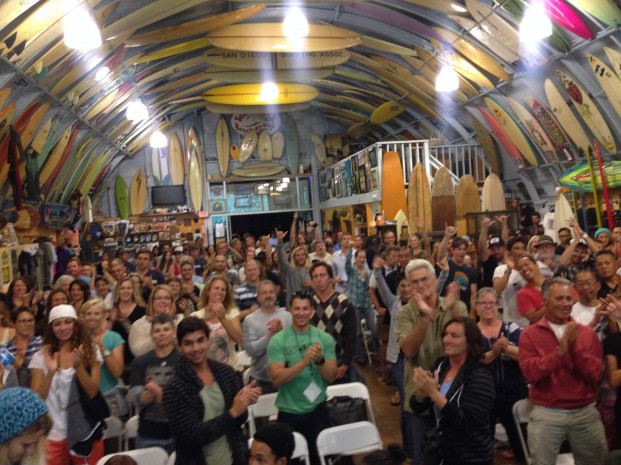 In 1998, I moved to San Francisco because I felt so out of place amongst my surfing peers in San Diego. I didn’t feel SD was where I belonged. I moved back a year later, but my time “away” lasted another decade. I went through a lot of turmoil during that period (tales for another day) but I also learned a lot and found my voice. Much of that time was spent sequestered away from the ocean and away from the surfing community… on Friday night, I was nervous. I knew in my heart that things had changed… but how much?

This was the amazing scene Thomas Castets and I experienced after answering questions post-screening of OUT in the line-up at the San Diego Surf Film Festival (OITLU won the “Audience Choice” award).

Thank you. Thank you for this gift. My heart continues to overflow with gratitude. I cannot yet put into words the deep impact this experience has had on me. One day, though… the words always come.

(If you haven’t watched the movie yet and would like to, you can watch it online here: http://outinthelineup.com/)

(pic: Thomas Castets, the producer and force behind OITLU & gaysurfers.net)