Some surfers may be gay. Deal with it. 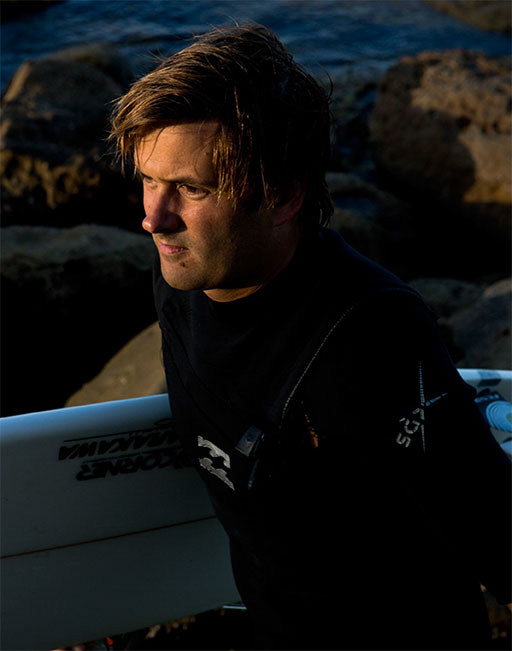 Look out there in the lineup. What do you see? Is it replete with svelte übermen with sculpted torsos whose predatory heterosexuality is written on their very being? Probably not. But look in the mainstream surf mags and industry image factories and you’d be forgiven for thinking surfing was the creed of some genetically engineered, pussy-chasing master race supped up on speed balls. The mirror is cracked, the image it reflects fragmented. And yet, up until now, no one has addressed the contrary reality of late-period surfing’s diversity. Despite the fact that, on any given day, most surf spots are populated by old men on SUPs, soccer moms on Alaias and tow-haired groms on mini-Simmons – just watch what happens when you drop the ‘G-bomb’.
“Surfing back in the day was free and open-minded and tolerant,“ says filmmaker Thomas Castets from his home in Sydney’s Bronte Beach. “Everyone who was a surfer was outside of the norm and therefore it was totally accepted to be different. But over the years I think surfing has become a standard in itself and has created its own stereotypes – images of being heterosexual, white and male. When you don’t fit into those standards, a lot of people feel they don’t belong.”The Frenchman has lived and surfed in Sydney for decades; he knows what localism feels and sounds like, when you’re on the wrong side of the in-crowd in a hyper-macho milieu. In 2010 he founded gaysurfers.net as a way to meet surfers he could identify with. In the safety of this new online space, surfers from around the world began to share their stories and it soon became apparent that Thomas wasn’t alone in feeling shunned by the very culture that he loved. Teaming up with director Ian Thomson, he went on to produce taboo-bashing documentary Out in the Line-up, which brings the stories of gay surfers – from weekend warriors to competitive pros — out into the light. “I was never really good at answering the question of what it feels like to surf and to be gay myself, so I went round the world with a camera asking loads of different people – professional surfers and other people in the industry – but also everyday surfers. They all pretty much said the same thing: I just don’t want to be the only gay in the village!”

This collective sense of isolation cuts to the heart of the surf industry’s greatest contradiction. By creating the all-pervasive, highly appealing myth of the surfer, everyone has (rightfully) up and gone surfing. As a result, surfing is shatteringly diverse. And yet the very industry which sets the standards to which budding waveriders are supposed to aspire still finds ways to deny the kaleidoscopic nature of the surfing population, pushing anyone who isn’t blue-eyed or hyper hetero to the outer fringes – or completely out of sight.

“I’m included in that feeling of not belonging,” Thomas says. “Everyone here knows about me and the film that I’m making. But whenever I meet someone new I still feel as if I have to tell them that I’m different – and I never know how they are going to react. This unknown creates a sort of dilemma. And I think the only reason people don’t know how to react is because they have never met any other gay surfers. It’s not that they don’t want surfers to be gay. It just creates an uncomfortable position, an awkward question. The reason we did the film is that we want to try to find a way to answer that question.”

The fact remains: the mainstream surf industry does’t appreciate these sorts of questions. Because the answers don’t help boost sales of board shorts. “I think the reaction to the film will be very different from the surf industry when it comes out than what it was when we started the project. When we reached out to people in the companies and on the tour and said we were going to make a documentary about homosexuality and surfing, they were very closed, very private. I don’t think it was that they were homophobic, it’s just that everyone knows about certain stories in US and Aussie surf culture about certain pros on the tour being gay and quitting the tour because they are gay, people being assaulted and so on. A lot of people in the industry just preferred not to answer our call for an interview, rather than face all these demons from the past. There are a number of issues within surfing that are not being dealt with and homosexuality and its place within surfing is definitely one of them.”

This collective vow of silence, upheld by those who function deep within surfing’s core, can be an intimidating barrier to tackle – especially when its founded on an idea of ‘us’ versus ‘them’. “We are independent filmmakers, not aligned to any brand or set of people in the industry; and it has been a challenge for us to let people know that we’re not here to blame anyone or to ‘out’ anyone,” says Thomas, who isn’t so much waving a flag as pointing out abject home-truths. “We’re here to say, ‘Look some of the athletes that you admire so much, well some of them are straight but guess what, some of them are gay.’ We strongly believe that if homosexuality were more visible, if young kids knew that one of their heroes were gay, then they would think twice before they made judgements. We’re not here to wave a rainbow flag – we’re here to show that surfing is way more complex, diverse and interesting than the what is portrayed in the media.”

But whatever the reaction to the film within the industry itself, the film has already made a change out there in the real world. “Craig Butler, who is six times Irish surf champion, wrote us a letter at the start of the process saying that there is no way he’d ever be able to tell his parents or his surf mates that he was gay because they just wouldn’t understand. But through the course of the documentary – over about a year between when we started and when he contacted us again – he wrote to us saying that he had changed his mind and that it was important that he told everybody who he was. If we can inspire people to be who they are like Craig, then that’s what the process is all about.”

Out in the Line-up is released Saturday, June 28.

2 responses to Some surfers may be gay. Deal with it.