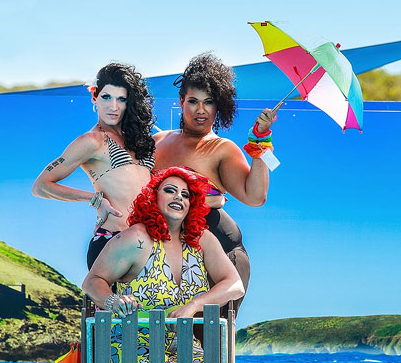 I recently read an article that was published by Surf Europe with regards to gay surfers.
The article notes that there are very few gay or openly gay surfers and athletes in general. Through the article the author appears to point the finger at the “straight surfers” and their attitude towards gay people. I can’t help but to think the author of that article, with all his good intentions, lacks the understanding of what it means to be gay. He seems oblivious to one of the biggest problems with being gay – even though the problem is sitting right there in the middle of his article stated in plain english.

In his article regarding CoastOut 2010 :

“It was a big success, scored good waves and even featured a beach handbag throwing contest to see who could land a fake Gucci clutch purse over and beyond a massive sand-carved penis.”

It’s currently 2013 and the world moves quickly in this day and age so I decided I should check what’s going on at CoastOut right now : (http://www.coastout.com.au/pet-porpoise-pool.cfm) For October 2012 it appears the purse and penis event was replaced by drag queens.

The question is, what do purses or penis’ or drag queens have to do with surfing or being gay? The answer is, absolutely nothing, and that is one of the biggest problems with the gay community right now, the invalid stereotypes and unrelated life style choices associated with being gay.

How many regular mens surf competitions include giant vagina sand castles? Why not? Is it because it has nothing to do with surfing and would be considered socially unacceptable or crude at best?

Why do gay competitions / events / promotions always seem to involve trying to push some unrelated and invalid stereotype onto gay people? Being gay is something you don’t have a choice in, you are born gay. Purses or dressing as drag queen are life style choices individuals makes, not dis-similar to buying apples instead of oranges at a grocery store. It is something you actively decide to do, and is completely unrelated to being gay. There is currently no scientific evidence of any gay predisposition for owning a purse or wearing high heels or dressing in drag.

The author of the original article wonders “Surely over the years there must have been a few benders tackling big bombs at Ocean Beach or some fruity types hitting the small and curlies at Bondi.” Here’s the revelation that seems to be lost on the author (I’m not blaming him, I’m just saying…). You can not tell if some one is gay by the way they walk, the way they talk, they way they dress, the way they float, they way they paddle, or the way they surf. The only way you can know if some one is gay is if they tell you. So yes, there are gay people in the water, they look, and talk, and float, and paddle, and surf just like anyone else. There’s no particular reason to yell out that you’re straight or gay while sit in the line up, so don’t expect to notice many more gay surfers at your local beach any time soon, they’re there, you just won’t know.

Part of the article looks at professional athletes. I’m not a professional athlete, but is it possible that perhaps a pro-surfer wants to be thought of as “the surfer who got the perfect barrel” instead of “the surfer with the – fake Gucci clutch purse”? Is it possible that the corporate sponsors  want a picture of a surfer doing a wicked backside like the one in the article from front of tracks, adverse to a picture of some one with excessive red and blue smeared all over their face like at CoastOut 2012?

So what about a typical non-pro surfer? I’m not a professional athlete but I am a regular-joe. I can tell you that every time I see people taking their personal lifestyle and fashion choices and pushing them as being “gay” or trying to use “gay” as a justification for their decisions – I feel embarrassed to be gay, I feel alienated from the gay community, and I feel angry. No one should have the right to impose any invalid and unjustified stereotypes upon me. We don’t accept stereotyping when the majority does it to a minority, why would we allow it here? I should not have to explain to my friends that “I’m gay but not like those people”. Every time I see these stereotypes associated with being gay, I think twice about telling anyone else I’m gay.

In the end, it’s the gay community which is making it the most difficult for me and others whom feel the same as me, to be openly-gay. The biggest fear isn’t how straight people will treat me, it’s that I’ll be associated with those unrelated lifestyle and life choice stereotypes that have been made by a small population of  highly visible gay people. The only people who have ever made me wish I weren’t gay have been other gay people. Thank you for asking the surfers to be more accepting of gay people, but at the end of the day, the biggest hurdle is coming from with in the gay community itself.