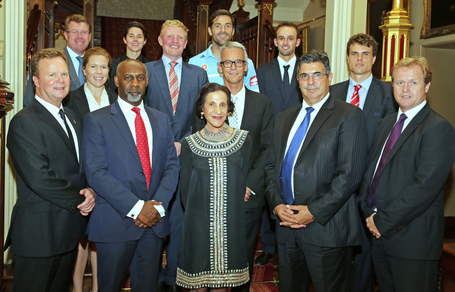 This week all of the heads of the big pro sports league in Australia gathered with organizers of the Bingham Cup to pledge their support for ending homophobia in their league. The Bingham Cup is the biennial gay rugby tournament honoring the legacy of Mark Bingham.

In addition, stars from all of the top leagues joined together to create a You Can Playvideo (above) to express support for LGBT teammates.

I‘m sure the heads of the other codes here today would agree with me that the game of football is like no other. But when you look back at the history of the game, the names which stand out are those that do something to change the fabric of the game. People like Ian Roberts, who in 1995 took the brave step as one of the toughest rugby league players in the game, to declare that he was gay. The great thing was not just that Ian was brave enough to make that declaration; but that it was so sensitively received by his peers in the rugby league community. Ian’s legacy remains. We still have moments when I’m not proud of something which happens in our game, like when one of our players made one of the most disparaging remarks about homosexuality last year. We should have been stronger in our condemnation of those remarks. We’ve learned from that experience, and would take a harder line against anyone in our game making such appalling comments today. That’s why the NRL wants to be part of this campaign against homophobia.

We’re current working on a revamped diversity and inclusion policy which makes it clear that our game is for everyone, regardless of their race, sexuality, colour, gender, disability or anything else. It will be in place by the end of August. We’re committed to tackling discrimination in any form that commitment does not start and end with a policy document. It’s why the NRL plays a prominent role in Harmony Day in the Western Suburbs, why we have a Close The Gap round, and why we have a Women In League round. It’s why role models like Greg Inglis and Jess Palmer are here from the Jillaroos, today, because men and women from every background are part of our game. Congratulations to all those involved in this project – it’s how real heroes are made.

This is the first time in the world that all the major professional sports in a country have collectively committed to implement specific policies and changes as well as to a timeline. They were brought together by the organisers of Bingham Cup Sydney 2014, the world cup of gay rugby, as well as leaders of Australia’s first gay rugby union club, the Sydney Convicts. The five sports agree to implement policies and changes consistent with a newly created Anti- Homophobia and Inclusion Framework, by the end of August, 2014. This is when thousands of international gay rugby players, fans and media arrive in Australia for The Bingham Cup, hosted by the Sydney Convicts.

“I’m proud to see Australian sports play such an important leadership role through making this commitment to diversity and inclusion,” said Australia’s Minister for Sport, Peter Dutton. “There is no place for discrimination on our sporting fields, in our clubs or sports organisations.” The Australian Government was represented at the event by Minister for Communications, Malcolm Turnbull.

A powerful 30-Second anti-homophobia ad was also be premiered at the event. It features the ‘who’s who’ of Australian sporting stars, including Mitchell Johnson (Cricket), Ryan Harris (Cricket), Harry Kewell (Football), Alessandro Del Piero (Football), Paul Gallen (Rugby League), Nate Myles (Rugby League), David Pocock (Rugby Union), Lauren Jackson (Basketball), Nathan Jones (Australian Rules), Sam Mitchell (Australian Rules), Kim Green (Netball) and Libby Trickett (Swimming). The Community Service Announcement was produced for Play by the Rules in conjunction with the American based charity ‘You Can Play. It will be aired nationally this year on TV and at stadiums. It can be downloaded by visiting www.binghamcup.com/news/media-centre

Andrew Purchas, President of Bingham Cup Sydney 2014 and Founder of the Sydney Convicts Rugby Club, said “Many gay, lesbian and bisexual people still stay in the closet, or drop out of sport altogether, because of homophobic attitudes and discrimination in sport. We have very few gay professional sportspeople who have felt safe to be open about their sexuality while competing and to ultimately be role models to others. With these initiatives, we hope to see significant changes to sporting culture. The major professional sporting codes are committed to do more than ban homophobic sledges. They have committed to create encouraging and welcoming sporting environments for gay, lesbian and bisexual people, whether they participate as players, officials or supporters.”