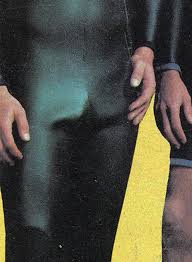 “Sex sells” is an adage that publishers and agency executives have embraced since time immemorial. And, historically speaking, perhaps no media space has committed to that line more than surfing. From John Peck’s classic “Penetrator” surfboard to Lightning Bolt ads featuring Rory Russell encircled by bikini-clad models to the faceless Reef girls hawking sandals, surf marketing and media have a long, not-so-subtle history of sexualizing our aquatic lifestyle. Hell, this magazine once just ran the word “SEX” in all caps as a cover blurb in the early ‘00s.

The iron-clad rule of that sexualization, especially in decades past, was that it must always embody a male, heteronormative perspective. The historic depiction of women in surf media? Seldom very clothed, often objectified, sometimes even when it came to some of the greatest female surfers of all time. Men? Also scantily clad, sure, but typically either ripping the bag out of waves or surrounded by beautiful, half-naked women in advertisements. “Yeah these guys hunt exotic waves around the world while perpetually in the company of other men, but they’re as straight as the day is long,” the ads seemed to insist, “and you can be, too, for the price of these boardshorts!”

While this imagery was surely alienating for most LGBTQ surfers (not to mention women), at least one saw a unique opportunity in the hyper-sexualized hetero-normativity of old surf mags. Enter Stephen Milner, a San Diego-based surfer and artist whose upcoming book, “A Spiritual Good Time”, appropriates old images from surf magazines and places them in an entirely new context – one that creates a vision of a far more queer-friendly surf culture.

“When it comes down to it, masculinity in surfing is extremely fragile — once you start poking at it, it just comes apart,” says Milner. “Looking at old surfing magazines, a lot of the images that I’m appropriating in this book or showing in my solo shows, I literally cut out women who were posing in bikinis underneath these men. It might be a wetsuit ad, so the bikini has nothing to do with the wetsuit — she’s just there to create sexual indulgence. When I started to cut out these sections, I started to feel that I had my own power to control the narrative in these mass-produced magazines.”