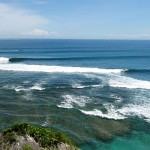 Bali is the best place to enjoy surfing and probably you may learn newer techniques as there are more innovative breaks for expert surfers at various beaches such as Padang, Balangan, Suluban and Bingin beach. Nevertheless, Bali has a comparatively rich gay scenario, though it is unquestionably less commercial as compared to other Southeast Asian countries such as Thailand or Singapore. But then, gays rock Bali. If you love nightlife and want to get lost in pubs and bars, you can enjoy every night you spend here! Like the tourist destination in general, the gay scenario is centered in South Bali around Seminyak. There are lots of eye candies around for those that just sought for the hunks. You can meet gays in pubs, bars, streets and even in hotels. All you need to have a good and genuine approach that may make your trip to Bali a life-time memorable thing.

The Gay Scene is becoming more developed, with dedicated gay bars such as Q Bar and Kudos on Jalan Dhyana Pura in Seminyak, and a strong gay presence at other venues on the same road and in the nearby late-night disco Double Six. Most of the other Seminyak clubs attract a good mixed crowd of Indonesians, expats and tourists.

While no beach is exclusively gay, one in particular has become very popular with gay tourists and locals. It is called Ganesha or Petitenget Beach on Jalan Petitenget (Road) in Seminyak. Going by car, taxi or bike. The old Massage and Restaurant place called Callego does not exist anymore, the owner sold the land to a big new Hotel in 2012. The gay activities on beach have moved a bit further north after hotel W retrait and Spa (from the W (SPG) and Mozaic Restaurant. A new small place “Collega” has opened with drink, light food, bed & umbrella on the beach.
Balinese people always friendly as before if you push yourself to be friendly, opened and speak to them.
Access by place named Bali Sani, jalan Batu Belig , after Mozaic Restaurant

-Rainbow Tourism in Bali: bali.rainbowtourism.com
-(get your business listed here)