Brighton is a great surf spot: The West Pier is a mellow, cruisy (not in the other often used term in Brighton!) low tide wave, The Wedge and C**t’s Corner are wedgy speedbump waves near the Palace Pier, the Barge is a mysterious seldom surfed big wave spot off the Palace Pier. The Marina (aka Custard Point) to the E of the Marina is the heaviest, most localised, beach / reef break in the area which you need a long apprenticeship at to be accepted. 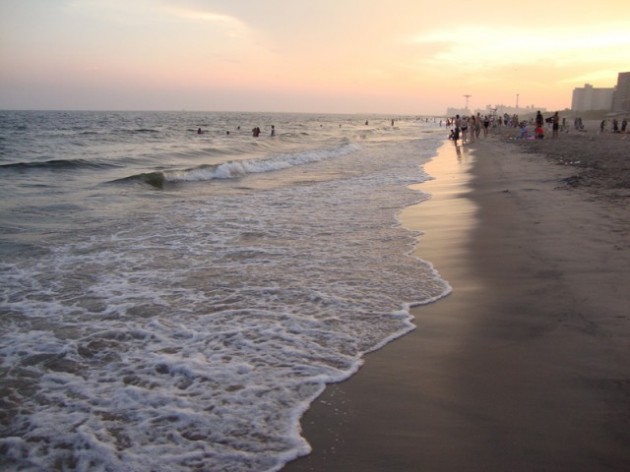 It is no wonder that Brighton has such a big gay community given its long and checkered history. This tiny fishing village, originally called Brighthelmstone, became popular when it was thought that both bathing in and drinking sea water, had a beneficial effect on ones health, leading Londonâ€™s society to flock to its shore. The seal of approval came when the Prince of Wales, later to become George 1V, took to the sea here. He enjoyed the relaxed atmosphere away from the prying eyes of London Society and the Court. He first set up home in an old farm house and decided to have stables and a riding school built to an Indian theme, these became the Royal Pavilion which is Brightonâ€™s jewel in the crown. This was the period when men were fastidious in their dress and become known as Dandies, the most famous being Beau Brummel who was a particular friend of the Prince Regent until he fell out of favour and had to flee the country to avoid his debtors. The opening of the train line meant that London became that much nearer and it became and still is home to many stars of music, film, literature and the theatre, which is probably why the gay community became so big. Amongst the great and the good that either were born or lived in Brighton are Dame Anna Neagle, Sir Terence Rattigan, Dame Flora Robson, Dora Bryan, Rudyard Kipling, Dame Gracie Fields MBE, Australian comedian Mark Little, Forces sweetheart Dame Vera Lynn OBE, inventor William Friese-Greene, who is known as the father of the moving pictures, Ben Sherman shirt maker extraordinarie, Magnus Volk inventor first electric railway in Gt Britain, Kevin Rowland of Dexys midnight Runners, Laurence Olivier and wife Joan Plowright CBE, Peter Oâ€™Donnell the writer of Modesty Blaise, Gaz Coombes of Supergrass, Oscar Wilde and his sometimes illustrator Aubrey Beardsley, Dusty Springfield, Julian Clarey, Ivor Novello, Virginia Woolfe, Fat Boy Slim and wife Zoe Ball the list goes on and on. It is this long and esteemed history that has led to the creation of the first British Hollywood style Walk of Fame being created. There is much to do in Brighton, the beautiful front used to boast two piers, alas one has burned down but the Georgian and Victorian squares and crescents are magnificent. If antiques and brick-a-brack are your scene, there are many little shops clustered in the Laines district which is a delightful jumble of back streets. There are also many gay shops like Fundamentally Female, Clone Zone and, if you are transgendered, Lacies will provide a selection of clothes and accessories to flatter and enhance. The Gay Village is located in the Kemptown area of Brighton and centred around St James Street where the numerous clubs, bars, and shops are to be found. In Brighton it is probably quicker to list the non gay friendly places but some of the venues worth a look are the Brighton Tavern, The Candy Bar which caters for the lesbian market, The Amsterdam which also sports a sauna and hotel attached, drag queens and transsexuals gather at The Harlequin for karaoke and cabaret, PV is a pub run by lesbians but they do allow the boys in and if you want a smoke with your drink, it has to be Legends on the sea front with their amazing roof terrace. After a drink you will want to sample the vibrant gay club scene. Start with the basement of Legends before going on to the internationally renowned Revenge, a huge club which is open seven days a week, then finish off at the very intimate V2. Some of the bars host club nights so look for Sunday Sundae at Audio, Wild Fruit at Tru and the inimitable FTPA at the Candy Bar. Just in case you want to sleep, shame on you, the number of gay friendly hotels are the most dense in the UK. Lesbians will want to sample the delights of the Pink House and Sea Spray whilst for luxury and position there is Queens Hotel, central to the action, right by the Pier and sporting a steam room, sauna and swimming pool, others worth a look are the New Stein Hotel, Paskins Town House with some art deco whimsy and Hudsonâ€™s. If you arrive by train you may want to take a diversion to see the Banksy close by which is the two policemen kissing. Finally, for the adventurous, Brighton has two nude beaches. One is legal, situated close to the marina, Hallo Sailor!, the other is unofficial and further away at Telscombe Cliffs. As this is a family beach discretion is advised.

Gay Friendly Businesses in the UK