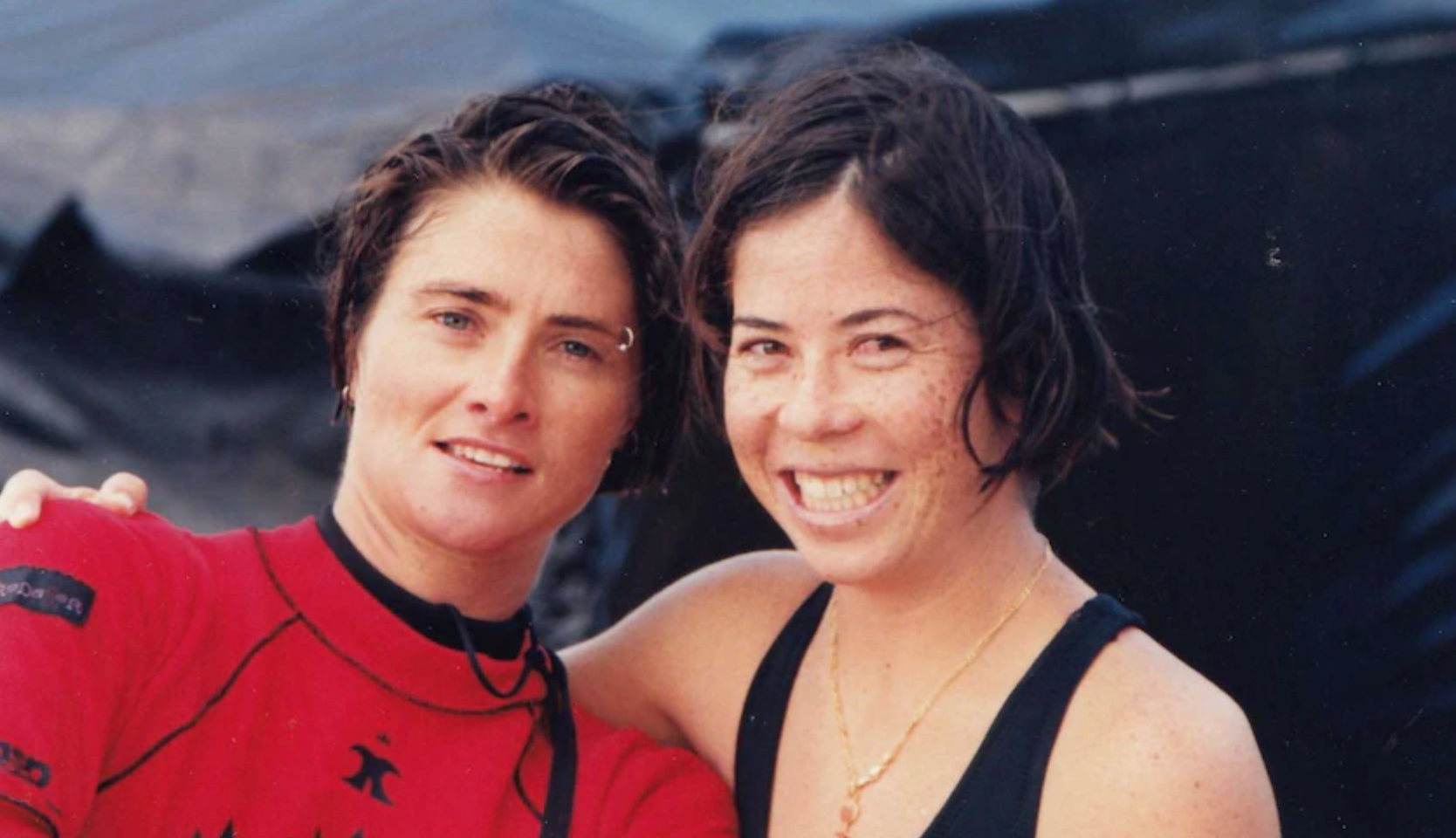 Jodie Cooper could ride the biggest waves the Australian ocean hurled at her. Yet that wasn’t the only thing that caught the attention of the surfing community in the 1980s.

As an amateur, Pauline collected surfing magazines and studied the styles of the handful of women who were already competing professionally, when they were occasionally featured.

She remembers Jodie Cooper as one of her idols.

Jodie consistently ranked in the top three in the world and carved success out of the formidable waves of Hawaii, where she would go on to win two major international titles in 1992.

Yet there was always “this sentence in the background” that followed after Jodie, in whispers: “Bummer she’s gay, though.”

The eastern suburbs of Sydney had a much a poorer and rougher reputation than the gentrified image they now enjoy.

Jodie remembers it as an intensely macho culture, unfriendly to gay men and women and intensely focused on surfing.

“Bondi was a tough town, and there were a lot of tough guys in the water that surfed,” she says.Listen to the episodeFrom the heartbreaking to the hilarious, each episode of Days Like These introduces you to one regular human as they live through something wild.Read more

Pauline had just won the World Amateur Surfing Championships and was living in Bondi in 1989 when she turned her attention to going professional.

That year, a neighbour she was friendly with in her street, John Russell, died at only 31 years of age.

His body was found at the base of cliffs near Marks Park, a local gay beat, and his death declared accidental by police.

A coroner later ruled his death a homicide. In 2015, NSW Police offered a $100,000 reward for information about his death, acknowledging its link to “gay hate-related crimes”.

Bondi was the backdrop for a horrific crime spree that remains largely unresolved: the gay-hate murders of dozens of victims across Sydney in the 1980s and 90s.

Homosexuality was decriminalised in New South Wales in 1984, but the years following saw a wave of homophobic violence that was met with “indifference” by police, impacting on the protection and delivery of justice to victims, a NSW parliamentary inquiry found in 2019.

“I think that was the sad thing about that generation, about gay people,” Jodie says.

Things were not much better in the water. Macho surf culture celebrated men’s success, while women were relegated mostly to the bikini competitions held between heats.

Female surfers faced a fight for any kind of professional recognition: in the media, through sponsorship and on tour.

“We were second-class citizens in a way,” Jodie says. “And of course being, on top of that, gay. Well, no-one really came out.”

Growing up on the eastern beaches

Pauline’s childhood had been shaped by the poverty and violence that once characterised the eastern suburbs.

After the unexplained deaths of her grandfather and father when she was five, her mother and grandmother were left to raise her and her three siblings alone.

In her early teens, her brother snapped his surfboard down the middle, and Pauline took one broken half to try out the waves. It was love at first ride.

Almost immediately, she had a laser-like focus on making a career out of the sport.

“It was surreal when you got to meet all these pro surfers,” she says.

“You look at a few pictures — and the next thing you know, you’re one of the women on tour.”

Jodie and Pauline both trained in Bondi and travelled to competitions together, meeting regularly in the water.

“She obviously heard that I was gay. So I think she was probably quite terrified of me,” Jodie says.

“I think Pauline and a few of the other girls had that mentality, because they just weren’t educated.”

But there was a common enemy the female surfers could unite against: the sexism of the professional surf tournaments.

Successful women in surfing were usually given a fraction of the prize money male athletes received.

On competition days, officials would assess the waves in the mornings to determine the order for the day.

Women were sent out in high tide or high winds, and would have their heat interrupted if conditions improved again, so that the men’s competition could benefit from the better waves.

“We just started saying we’re not going to put up with it anymore,” Jodie says.

A documentary exploring the history of women in surfing, Girls Can’t Surf, describes how during one competition in South Africa in 1999, international female professional surfers started pushing back, together.

The women appointed a representative to notify officials that as a group they would not compete in unsatisfactory conditions.

“It was good that there was that solidarity there,” Pauline says.

Meanwhile, as they trained, toured and partied together, Pauline and Jodie’s friendship also grew.

“Jodi introduced me to going to Mardi Gras, and so I was around thousands of gay people. I’m just like: ‘Wow, this is amazing. You can just be yourself,'” Pauline says.

One day, while lying in bed with a boyfriend, a thought entered Pauline’s head: “It would be so nice if this guy was a girl.”

“And then I stopped myself and went, ‘Whoa, where did that come from?'”

She steeled herself to tell Jodie. “I’m like, ‘You know, I think I’m pretty sure I’m gay,'” Pauline recalls.

“[Jodie] and her girlfriend just absolutely started cracking up laughing, going: ‘You only just realise now?'”

Jodie says Pauline was “lucky, really, to have us around”.

“It was a pretty hard thing to do in those days.”

The prospect of coming out to the wider surf community was another matter. To Pauline it felt like “almost a life or death situation”.

She remembers hearing that a fellow surfer had been attacked and ended up with a punctured lung for holding her girlfriend’s hand while walking down the street.

The revelations about John Russell’s murder only intensified her reluctance to be publicly out later in her career.

In interviews, when Pauline was asked about the woman who was always seen travelling with her, she would tell journalists it was her coach. It was, in fact, her girlfriend.

Pauline says fear kept her in the closet her entire career — as well as the desire to find companies to sponsor her.

“If they knew that you were gay, there was definitely no way that you would get sponsored,” she says.

Jodie’s reputation as a photogenic, big wave rider led to long-term sponsorship deals that gave her some financial security.

Then Jodie made the decision to come out on tour — or rather, not to hide the fact that she was in a stable, long-term relationship with a woman.

“I know for a fact it made people question me a lot,” she says.

“I know that the sponsors, when they found out I was gay — I heard it first-hand from someone — that they weren’t really happy about it.

“They needed to cull some people, so they decided that I probably would be the first on the chopping block.”

In contrast, Pauline had long been forced to fundraise just to travel from tournament to tournament.

In Hawaii in 1993 she reached the pinnacle of surfing success: she was declared world champion, grabbing the title from the female athletes she had once idolised in magazines, including Jodie.

She was noted for overcoming the chronic arthritis that had plagued her since she was a child, and the financial instability she had faced throughout her career, with no sponsor.

But once again, the sport’s method of assessing the value of male and female athletes turned out to be very different.

Pauline received a call from her coach (her actual coach, not her girlfriend).

“He said: ‘I have to tell you this off-record, but one of the major surf brands doesn’t want to sponsor you because you don’t have the look they want,'” Pauline says.

“I’m a freckle-faced, black-haired woman, whereas all these other girls are tall, blonde hair, blue eyes.”

Over her two-decade-long career, Pauline says she was only sponsored financially for about five years.

“And the only company who sponsored me at the time didn’t know about it. They didn’t know I was gay.”

Eventually, both Pauline and Jodie walked away from the sport, and now live just a few kilometres away from one another on the north coast of NSW.

“She still surfs better than me. She still catches more waves than me,” Jodie says.

Jodie is eager to point out her positive experience in surfing: she went on to be sponsored by a company that knew she was gay.

“It wasn’t all doom and gloom and downer — most of it was, but there were some genuine people out there,” she says.

When describing the surf culture of their era, Jodie and Pauline use the words “homophobic” and “misogynist”, but speak about their careers without the kind of bitterness they could have held onto in retirement.

“If we could press rewind, I’d go back and do it again. And I wouldn’t change anything, I don’t think,” Pauline says.

What’s clear is the change they did effect, paving the way for future generations of surfing women.

Jodie was inducted into the Australian Surfing Hall of Fame in 2020, two years after Pauline was recognised.

In the meantime, the sport has made significant inroads to address its gender inequality issues, including introducing equal prize money for men and women in 2019.

“I just couldn’t stop crying. I was just so happy, and I never thought it would happen in my lifetime,” Pauline says.

Jodie agrees. “I was pretty emotional, pretty excited for the girls.”

“And then I started getting the calculator out and working out how much money I would have made back in the day.”

Just this week, a crowdfunding campaign aimed to raise $25,000 in donations for Pauline, who as world champion in 1993 had to spend that amount — most of her prize winnings from that year — just to travel to competitions.

The fundraiser has since raised over $40,000, and Pauline will donate the remainder to other charities.

And despite the challenges she faced, Jodie says she has no regrets about having lived openly as a gay athlete at a time when homophobia was rampant.

“I just felt it was a moral injustice, and I just couldn’t personally walk the planet knowing that I hadn’t done my bit to try and change people,” she says.

2 thoughts on “Jodie Cooper and Pauline Menczer took different paths to the top, but faced the same macho surfing culture”